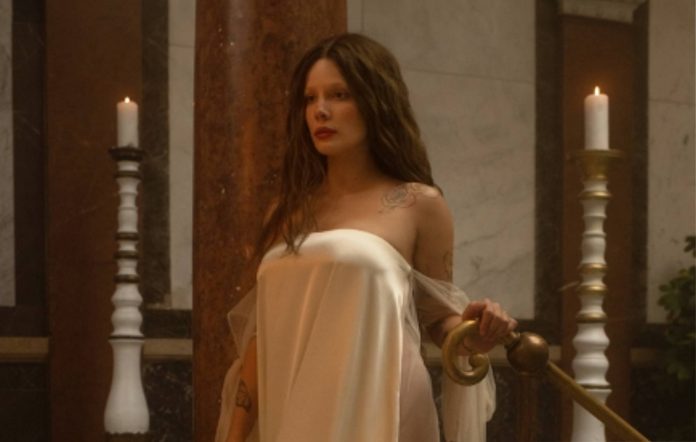 Halsey on making new record and film simultaneously: “I was almost method acting my album”

Halsey has recalled the experience of making ‘If I Can’t Have Love, I Want Power’ and its accompanying film at the same time, saying that they were “almost method acting my album”.

The singer-songwriter released her fourth studio effort over the summer alongside If I Can’t Have Love, I Want Power, an hour-long visual piece about “the lifelong social labyrinth of sexuality and birth”.

Speaking in last week’s NME Big Read interview, Halsey explained: “I’ve wanted to do a film for an album since [debut album] ‘Badlands’ but, to be frank, I haven’t had the financial resources to do it.

“This was the thing where it was like, ‘OK, people want to give you money to make art – what are you going to make?’”

Halsey went on to recall how the movie influenced their latest record. “I was almost method acting my album, which I think is super douche-y but is what was happening,” they told NME.

“It was really cool to make a record in tandem that way because you’re not going back and drawing connections that aren’t there and trying to fill in holes to make stuff work. All of it is so cohesive and coherent the entire time.”

The singer said that making the film resulted in ‘If I Can’t Have Love…’ feeling like a concept album. “The most important thing to me is that this album has tension – it needs to be visceral, or I’m doing a disservice to the message,” she told NME.

Speaking of enlisting Nine Inch Nails’ Trent Reznor and Atticus Ross – who produced the LP – she remembered: “First of all, I thought I was writing a letter to Santa being like, ‘I’ve been a very good girl’.

“I was just really honest and said I was a huge fan and I’ve been plagiarising you guys for years – badly – and I’m not arrogant enough to believe that I have anything new to offer you, but this album is about pregnancy, gender identity, body horror.”

NME hailed Halsey for creating “an endlessly compelling artistic statement” with ‘If I Can’t Have Love, I Want Power’. Check out our four-star review here.

Elsewhere in the Big Read interview, Halsey spoke about the honour of receiving the Innovation Award at the BandLab NME Awards 2022, which they will pick up during a ceremony at the O2 Academy Brixton in London on March 2.

Halsey told NME that she “wasn’t expecting” the award and was “very surprised” to be recognised with the nod. “But it’s really, really awesome,” she added.