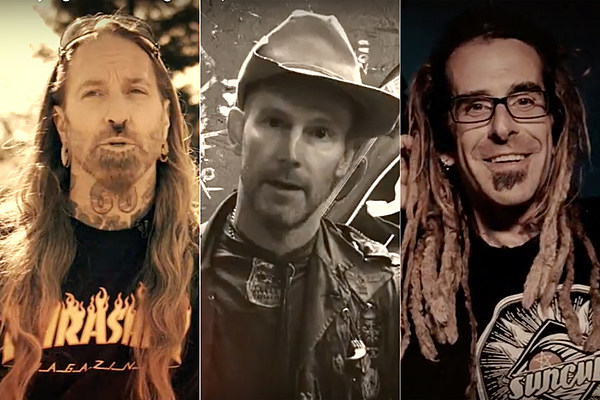 It's one of the more intriguing projects of the year. DevilDriver have invited a number of special guests to join them as they give a metal makeover to a number of outlaw country classics on the new disc, Outlaws Til the End: Vol. 1. While the album should definitely draw interest among fans of both metal and country, the question remains of if and when DevilDriver and their guests will support the album on the concert stage. In this exclusive video, a number of the project's participants share their thoughts on that topic, with most appearing willing to participate.

"I'd love to take that lap steel on the road," gushes guitarist Neil Tiemann, just thinking about the idea of replicating some of the album's songs live, while drummer Austin D'Amond adds, "I would love to because they're some of the most off the wall things that I don't usually get to do on songs."

DevilDriver frontman Dez Fafara suggests, "If we can take it out and maybe have some of these guests, maybe do one night in New York, one night in L.A. or one night in Nashville, that would be great." That seems to be an idea that some of the guests can get behind. "It's definitely possible, but the hardest part will be getting everyone in one place," says Wednesday 13. Lamb of God's Randy Blythe laughs, "I don't think it'd survive a tour, but a couple of shows would be a whole lot of fun. You can't get 13 different frontmen together and expect them to pull a tour off, but we could do a hell of a show for sure." Hank III adds, "It could happen!"

Fear's Lee Ving, a veteran of Dave Grohl's Sound City tour which brought together a number of acts from the Sound City documentary for a limited number of shows, says, "I love it."

Watch as the members of DevilDriver and the various participating artists mull the idea of playing shows in support of Outlaws Til the End: Vol. 1 in the player above, and we'll keep you up to date if special announcements are made. The Outlaws Til the End: Vol.1  disc arrives July 6 and you can pre-order the set here. Revisit our interview with Dez Fafara about the album here.