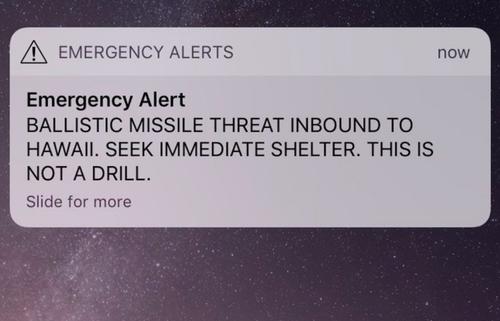 Officials have assured Hawaii residents that a push notification received by many warning a “ballistic missile threat,” was a false alarm. Hawaii Emergency Management tweeted “NO missile threat to Hawaii” shortly after residents began to share screenshots the push notification they received on their phones on social media. “BALLISTIC MISSILE THREAT INBOUND TO HAWAII. SEEK IMMEDIATE SHELTER. THIS IS NOT A DRILL,” read the notification.

An EMA spokesman told Buzzfeed news, “It was part a drill that was going on.”

Meanwhile, Lt. Commander Joe Nawrocki the North American Aerospace Defense Command, told Buzzfeed, “There is no missile threat. We’re trying to figure out where this came from or how this started. There is absolutely no incoming ballistic missile threat to Hawaii right now.”

A tweet from reporter Michelle Broder Van Dyke points to a message being aired on television.

This story is developing.