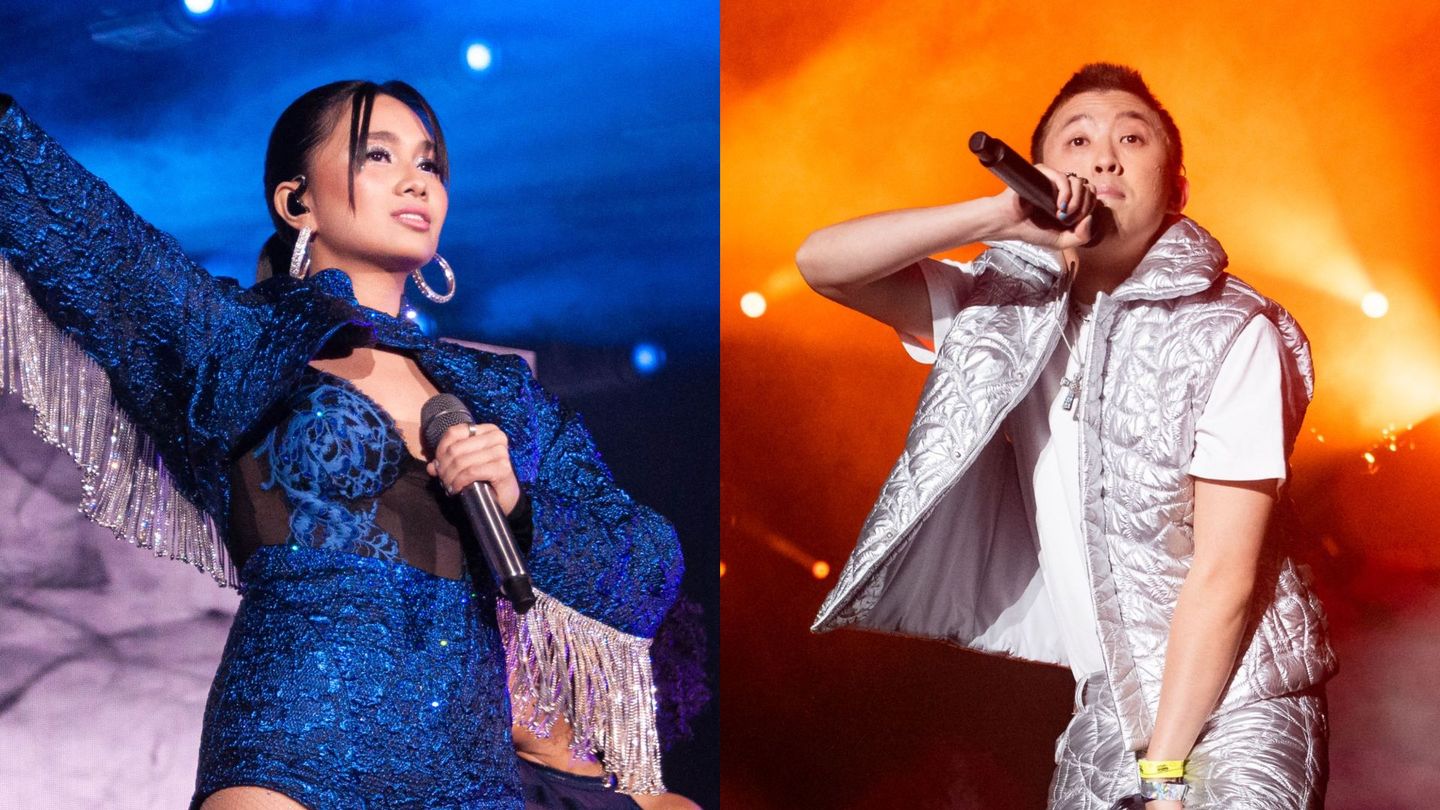 Head In The Clouds Filled An Entire Stadium With Asian Joy

To experience 88rising’s recent Head in the Clouds festival was to feel pure jubilance. Bursting through sunny, sublime skies on November 6 and 7 was history in the making: Every space inside Pasadena’s Rose Bowl Stadium was interwoven with Asians and Asian Americans owning their power. In the middle of the gathering, an Asian plaza-inspired sign directed crowds to the heart and soul of the festival — Asian-owned restaurants and businesses. The smell of Bopomofo’s spicy Sichuan wafted through the air as festival-goers — dressed in everything from Joji’s Pink Guy skin-tight bodysuit to an outfit designed after the national flag of the Philippines — excitedly lined up.

The nucleus of this was the 88rising label, which first organized the fest in 2018 as a celebration of what it means to truly, unquestionably be proud of our identities. Asian storytellers are often forced to be simultaneously the creators and heroes of our own tales. As a result, the music company encourages artists to pen their own, pushing boundaries so Asian narratives properly come to the forefront of the conversation.

This constant battle of ensuring Asian art and lives are visible — this fight to be seen — can be suffocating. Many of us look for the small windows where Asian stories aren’t defined solely by learning to be resilient or strong. As such, every performer made sure to inundate the stage with their prismatic fun. During headliner and early label-signee Rich Brian’s performance of flamboyant track “Edamame,” backup dancers popped and locked while dressed up as the titular soybean. Up-and-coming singer Bibi rained down condoms on her audience and kissed a female fan mid-performance, all in the name of giving people a space to simply get lost in the magic of the music.

In the midst of booming bass during headliner Saweetie’s set, she paused, glittering eyes taking in the 30,000 festival-goers with awe. She dedicated her performance to “Asian kings and queens” watching. While the crowd aggressively shook foam light sticks in their hands, she encouraged something radical — the act of learning to proudly “love yourself.” The audience erupted in noisy, unadulterated joy. The nights at Head in the Clouds always end like this: laughter, light as air, blanketed by the collective feeling the festival’s very name conjures.

“This community has been built up from literally the ground up,” headliner Niki explained to MTV News, speaking to the magic in the atmosphere. “It’s just really cool to see a familial bond between artists, artists’ fans, artists’ company … It just feels really tight-knit and like a real community.” Backstage before their big performances, she along with Head in the Clouds’s other star Indonesian performers Rich Brian and Warren Hue take us through their journeys standing up for themselves creatively, their authenticity as creatives of color and Asian pride and joy.

MTV News: What does Asian pride and joy look like to you?

Rich Brian: It kind of looks like what’s going on out there right now. I think it’s just like seeing this many people, and there’s so many Asian people just being able to express themselves. Watching a lot of people that are also expressing themselves is really cool, and just seeing that influence happen right in front of you. I don’t go out much. I’m a very homebody-type person. But I love doing Head in the Clouds because every year, I get to see this happen in front of me.

Niki: I think it’s just all of us celebrating who we are, via food, via music, via celebrating each other. As a diaspora, especially because we’re like a minority within a majority culture, I think it’s so important to uplift each other and kind of just have that spirit of like, we’re all in this together. And I’ve seen that a lot within my own friends. I think a common misconception is that I’m Asian American, but I’m literally an Indonesian person that moved to America. So my experience differs from, you know, my friends who are first-gen, second-gen Asian Americans. And yet, there’s still this kind of overlap in terms of the Asian experience in America. I think it’s just so beautiful, just as it is. I think we just need to celebrate one another.

MTV News: How do you feel now, looking at the crowd and seeing everyone excited to see you perform?

Brian: It felt great, man. That was crazy. That was my first time performing since 2019, and it was crazy. Especially like, you know, after not seeing that happen for two years. Just seeing that in front of me — this so far was my most surreal-feeling show. I think the most surreal [performance] was this show, and then my first show ever. Usually when I perform, I’m very present. I’m very there and I know that I’m performing. I know that that’s what I’m doing. But then, when I was doing my set last night, I just remember being three or four songs deep, and I’ll still be like, wait — I’m performing right now. I would just go somewhere, then come back, mentally. And it just took a lot to process. But it was insane.

Warren Hue: This is my first time performing, ever. So it’s crazy, like super surreal. I used to perform with 100 people watching me, and most of them would be like, my homies, or at a club and stuff. But this is like, damn. I’m seeing people actually love the music I made when I was back home in Jakarta, in my bedroom. [This music], it’s getting transferred to like 30,000 people. That’s, like, so surreal to me. Oh my god, it feels like a dream for sure. And the feeling still lasts until now.

MTV News: Do you remember the first time you stood up for yourself creatively since joining 88rising?

Hue: I started off just making songs on YouTube and shit, and posting it on SoundCloud. So I was just like, oh, this sounds good. I like listening to it. And I’ll just post it — weekly, monthly. And just without, you know, who cares if people don’t fuck with it? You know what I mean? Because I like it.

Brian: A part of being an artist is also just collaborating. You have to kind of trust other people’s creative decisions and perspectives. One of the first times I had to stand up for myself creatively, it was… for a music video, when I [was] in the editing room with the director. Because sometimes when you’re in that room — it’s just you and the director. And you’re staying up late at night, you’re both tired. You really don’t like the shot of yourself or how it looks, or, like, you feel like this shot really matches with the music. But then he has his own tastes. For me, [music videos] are very important to me. So I get really, really into it.

MTV News: As a creative of color, what does authenticity and overcoming failure look like to you?

Niki: I think it took a minute for me to navigate. I’m Indonesian, but I speak English, but I live in America. I think the main takeaway from this learning journey that I’m still on is just to embrace that it all adds to my identity, as opposed to taking away from it. I think, as a 16-year-old, I was like, who am I? Am I American? I’m not American, but I speak English. And I remember just being so confused. But I think the confusion is part of the process. At the end of the day, it just adds more dimension and color to everyone. As a creative of color, I think it’s just been really cool growing into what I believe is authentic to myself and to my artistry.

MTV News: How are you taking care of yourself after your performance?

Niki: I am actually planning to go home to Indonesia in December to see my family, and I haven’t seen them since COVID. I think, like, seeing family and just kind of being back in a home environment — and when I say home, like, home has kind of a loose meaning for me now. But Indonesia is always my first home. Whenever I go back, it just resets. I’m my dad’s kid. I’m my brother’s sister. I’m just chilling and I have my cats. Going home is just always very healing for me. That’s just gonna really help me reset and also just appreciate life.