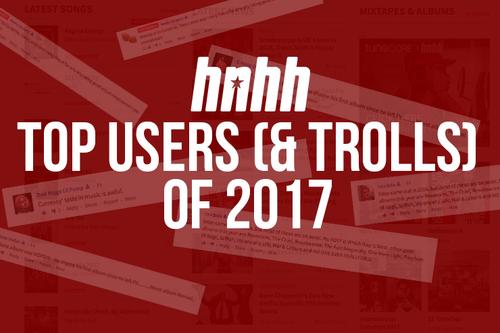 Happy New Year, HNHH friends!! As we plan for the year ahead, and reflect on the past year, we’re paying tribute to all the users that helped the site, or perhaps more specifically, the comment section, thrive over the course 2017. Some you are trolls whom we have a love-hate relationship with, some you are genuine and thoughtful in your commenting, and some you are just plain hilarious. Even if you are not an avid commenter, chances are you get pulled into reading the lively comment section just for the lolz and lmfaos. After taking a break from this feature last year, we’re back in effect for 2017 but just know: we have our banning fingers nimble and ready if things get out hand (warning shots!!).

With 2017 ficially behind us, take a look below to find out some stats and info on some our most persistent trolls, our most loyal users, and who on the site had the most comments this year.

For whatever reason, we seemed to have an abundance teeth-promoting users in 2017. We’re sure some you have been around prior to this year, but it’s only been the past twelve months that we’ve noticed this trend takef. After doing some digging, I discovered something amazing. There are 25 users who incorporated ‘teeth’as part their username, and another 28 opting for the lonely ‘tooth’variety.

It seems the most rampant is shouting out Young Thug’s teeth. There are multiple user accounts belonging to Young Thug’s Teeth but it would appear this one is the original — at least in terms account creation. Below, you’ll find a timeline current Young Thug Teeth accounts and their variations, as well as some other teeth username favorites.

1. ?Young Thug’s Teeth? (the earliest account, the OG, it seems)

8. Future The Trashman – Ethered Young Thugs Teeth (did he really though??)

Lil Wayne’s teeth (We’ve got a coupleLil Wayne Teeth users, however this one is the OG)

Most frequently used rapper name in a username:

The most real-ass (& generally positive) commenters:

1. Made_to_Post: We want to give a shout out to Made_to_Post for coming correct with the comments, fering up actual discussion points and real (we think) opinions on subjects– and not random subjects, the subject the article where Made_to_Post is commenting. He’s also the most generous user 2017 when it comes to bestowing ‘Likes.’

2. Only Real HipHop Can Last: Second place comes Only Real HipHop Can Last — as you might expect from a username like that, this user ten fers up his thoughts on anything music-related, whether it’s the latest Lil Wayne song or a listicle we created, and whether that opinion is negative or positive, we herald the fact that one thing is for sure, he’s not going out his way to troll. He’s just doing him.

3. Jar Jar Binks: In third place, we salute Jar Jar Binks for also delivering real comments on pertinent stories, even though Jar Jar can be critical, most time it’s not entirely unwarranted either. Jar Jar is not spamming our pages or else fanning out about any one particular artist. And we appreciate that. This user is also very respectful with the ‘Likes.’ We could all use a little bit more ‘Likes’ in our lives, amirite?

Most reported, aka most annoying, aka biggest spammers:

As the title indicates, these were the top 3 most-reported users in 2017, meaning, they kept saying shit that you didn’t like. Whether it was spam or legitimate hateful speech, they kept getting on all our nerves.

Deathstroke goes in on Chris Brown’s behalf, Every.Single.Day. He’ll ten just refer to the singer as CB, and speaks as though he knows him personally. Apparently, he knows what’s up with stocks too (yet somehow the conversation will always circle back to CB). The HBOAFM addition to Deathstroke is a more recent flex on Breezy’s behalf, but if you recall, he’s also had other accounts under the Deathstroke name that may not have been as fervently passionate about CB. A recent sampling for your amusement:

This comment is in reference to this article, for context’s sake:

Is it a surprise that among our Most Hated users, we also find our Biggest Stans? Next up, you’ve surely seen him go to bat for PND whether or not it actually makes sense (meaning, it doesn’t really matter what the topic is), Pnd durag goat Aka simulation theory. Now this user actually has six total accounts, ranging from 2016 to the most recent Pnd durag goat Aka simulation theory adopter in September 2017. It’s safe to say, some these (or all) are the same person. That might just be what happens when you get yourself banned time and time again. As well, the many Pnd durag accounts seem to be embroiled in a beef with another infamous user, Trashman, although it’s unclear if this is a one-sided beef.

3. Tunechi got that sack: Tunechi is not new at this thing, he’s been going hard for his boi Lil Wayne and continues to do so, especially in the wake D6. His comments take the perspective Weezy himself, and he’ll ten begin his comments with some typical Wayne-inspired lingo, “Word to blood slime,” and then close his comments with a “Free C5” shout out some sort as well as a wealth exclamation marks.

We want to give a special shout out these dudes for staying consistent on the site over the past couple years. They’re loyal, and more ten than not, respectful.

Where are they now? Troll edition:

1. Mr. October: If you can believe it, we actually have ONE HUNDRED AND THIRTY THREE DIFFERENT accounts with the Mr. October username (and about half them are currently banned). Thus unsurprisingly, he was once an unavoidable presence on the site, but he’s since disappeared a bit from plain view. The one we’re linking to here is the oldest account that currently exists, however as time has gone on, the Mr. October accounts have taken different forms with different affixes to the name, the most recent iteration Mr. October comes as Mr. October – Biews Boming Boon.

2.? LORD PILLS THE MIGHTY ? : Lord Pills was also an abundant and incessant presence on the site, he even had a ? LORD PILLS BACKUP ? account, ’cause you never know (there also accounts claiming to be LORD PILLS’ DAD, as well as his Mother, and in another instance, his Angry Momma). However he hasn’t been littering our comment sections as much as he did previously in the year. Where’d he go? Do we even miss him?

3.Trashman: As with the two above, Trashman was once a rampant troll on the site, and so the fact that there are 26 different accounts adopting Trashman into their username somehow is unsurprising. If I recall correctly, Trashman and LORD PILLS were ten in cahoots, or else beefing, across the HNHH pages. The latest iteration Trashman is Future The Trashman – Ethered Young Thugs Teeth, although he has not been overtly active as late.

4. Giovannie Hernandez: Who remembers when good ol’ Giovannie would comment at lightning speed on any and every post, simply repeating the title the article? He actually resurfaced recently, but remains much more lowkey than previous years.

These our our top 10 commenters the year, based f the number comments each made, which is included below. Is it kinda crazy that our #1 commenter almost doubles in amount than the person that follows him??? Lawd.