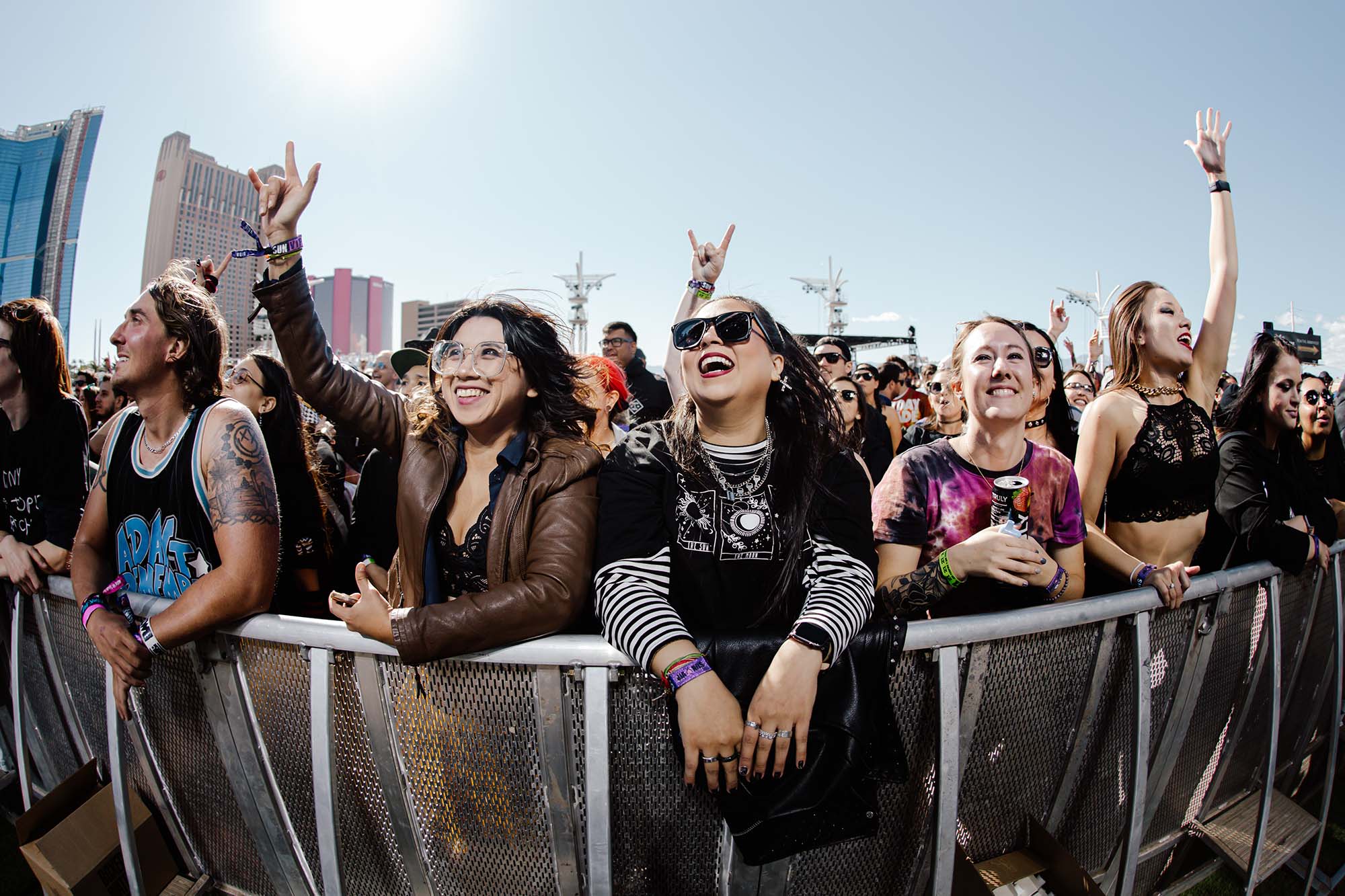 On Saturday, October 22, as fans from around the world queued outside of the Las Vegas Festival Grounds, outfitted in their best emo-inspired outfits and ready for the first day of the sold-out When We Were Young music festival, bad news started to spread. According to multiple reports, high-speed wind gusts threatened to shut down outdoor events in Sin City, and not long after those reports started to surface, would-be attendees received an alert on their festival app.

“When We Were Young Festival organizers have spent the last several days proactively preparing the festival grounds for a windy Saturday,” a statement read. “The National Weather Service has now upgraded their Saturday forecast to a High Wind Warning, including dangerous 30-40mph sustained winds with potential 60mph gusts.

“Under advisement of the National Weather Service and the Las Vegas Metropolitan Police Department, we have no other choice than to cancel today’s When We Were Young Festival. The safety of our fans, artists and staff will always be our top priority.”

The statement continued: “This was not a decision that came lightly. We know many of you travelled to the area to have a spectacular day with your favourite bands and have been looking forward to this day for months.  We were equally as excited and are devastated to have to share this news.”

The last-minute cancellation was the latest blow for the festival, which had been dubbed by some as “emo fyre-fest” thanks to its tightly stacked line-up of pop-punk bands, which was set to be repeated for three days (Saturday, October 22, Sunday, October 23, and Saturday, October 29) on only three stages with little time between sets.

However, as the acts and fans started chatting about the cancellation on social media, the unfortunate turn of events sparked a new plan. Bands on the bill and representatives from the local Las Vegas music scene stepped up and quickly created alternative experiences for fans.

The All-American Rejects took to the stage at local restaurant Soulbelly BBQ in Vegas’ Arts District. The free show drew a crowd of hundreds to the intimate venue. “I’ve had the best day of my life”, AAR frontman Tyson Ritter said from the stage. “I’m so grateful to be able to show some of these kids where Vegas is, the working class, and the Arts District”. He added, “I feel like Vegas understood the Rejects first. It’s a city that the Rejects feel like we belong in.”

As Soulbelly reached capacity inside, fans hung over the railings surrounding the outdoor patio just to catch a glimpse of the band all singing along to AAR’s hits like ‘Dirty Little Secret’ and ‘Move Along’. Ritter’s new band, Now More Than Ever, also played their new track ‘Don’t Rush, Don’t Wait’ for fans. “Downtown Las Vegas is really the fucking shit,” Ritter said from the stage before walking away from the ecstatic crowd.

Another gathering of WWWY attendees on Saturday evening took place at the Sand Dollar Lounge in a 300-person capacity room as nearly 1,000 fans waited outside, hoping to get into the Unofficial PBR Party where Senses Fail, Thursday, and Bayside took the stage.

Closer to the Festival Grounds at The Strat, another last-minute show wooed fans. “When we got the call that Saturday’s When We Were Young festival had to be cancelled because of the wind, we were all obviously immediately bummed out”, Ronnie Winter of The Red Jumpsuit Apparatus told NME. “We knew we would have two more days to play, but also we were well aware people flew from all over the world and, in some cases, only had tickets for Saturday.”

Winter continued: “Good thing all the bands on this fest [line-up] come from the DIY punk rock scene. Within hours I was on the phone with many of my friends in bands in Vegas, trying to figure out what we could do to at least play something for the people in town with nothing to do. We announced the show, and within 15 minutes, thousands of people flooded the Strat.”

The Vegas hotel had to stop letting fans in at one point, due to quickly hitting capacity. “We played a tiny stage mainly used for lounge bands in a random corner of the casino,” Winter added. “We all played stripped-down sets to try and keep things chill since there were so many people crammed in. We just hope we made at least a little bit of light out of a bummer of a day.”

“Was supposed to go to When We Were Young Festival, but got cancelled but at the end of the day still snagged myself a chance to see BMTH which made my night extremely better,” one fan wrote in the caption of a video from the night’s show.

By Sunday (October 23) the wind had slowed down, and anticipation for the festival reached a new high as fans made their way back to the festival site. However, despite the extra day to perfect logistics, their were still hiccups on the first day. Attendees noted that wristband pickup points were confusing, there were also long lines, meaning extended wait times for food, drinks, merchandise, and toilets. Despite those issues, the bands and fans took the experience in stride.

“When We Were Young was just as amazing as we hoped it would be,” Ben Jorgensen from Armor For Sleep told NME. “It was an amazing celebration of this music that changed all of our lives, and we couldn’t be more proud to have had our fans right there with us.”

When We Were Young Festival continues this weekend, with Paramore , My Chemical Romance and more set to return on October 29. Earlier this week it was announced that Avril Lavigne will no longer be on the line-up, however, Death Cab for Cutie and Underoath will be added.

The festival will then return to Las Vegas next year on October 21, with its 2023 bill headlined by Blink-182 and Green Day alongside 30 Seconds To Mars, The Offspring, Good Charlotte, Rise Against and more.