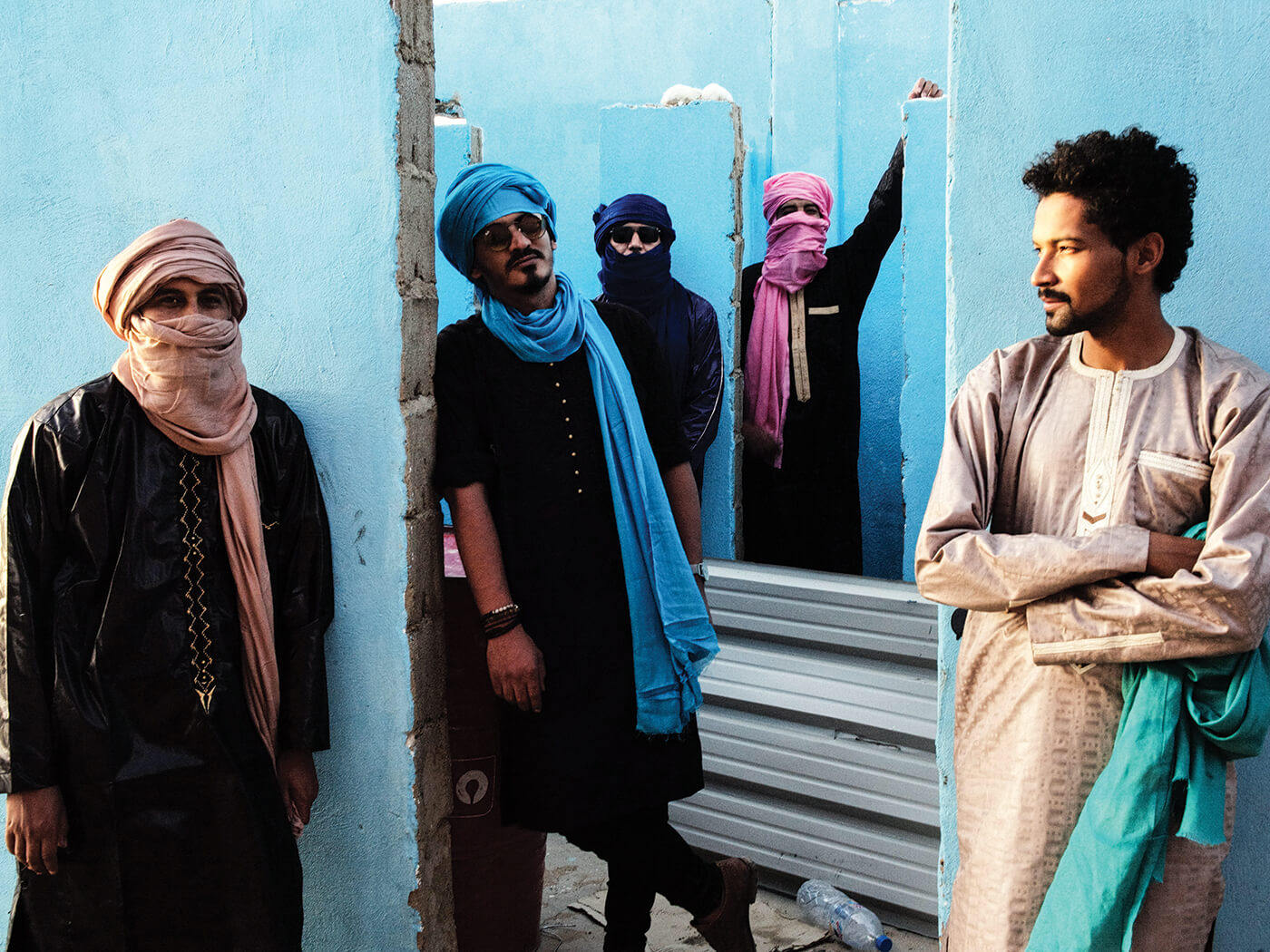 Imarhan have long been anointed as official heirs to Tinariwen’s desert-rock throne. Frontman Iyad Moussa Ben Abderahmane (aka Sadam) is the cousin of Tinariwen’s bassist Eyadou Ag Leche and has joined them as a touring member on occasion. The bond between the two bands continues on this album, with Tinariwen’s Abdallah Ag Alhousseyni and Mohammed Ag Itlale (aka Japonais) contributing guest vocals – the latter, poignantly, in his final recording session before his death in February.

While the music Imarhan make draws from the same well, combining blues and rock with Tuareg folksong and its distinct flavour of “assouf” (which broadly translates as longing or solitude), they always set out to distinguish themselves from their forebears by incorporating poppier influences and appealing to a younger generation. Press photos around the time of their 2016 self-titled album showed the quintet dressed in jeans and leather jackets rather than the traditional allichu veils, while the promo clip for the following year’s terrific “Azzaman” found them cruising around the suburbs in fancy shades and pulling donuts in the desert, in a knowing nod to hip-hop culture. The video for “Achinkad”, Aboogi’s first single and opening track, is markedly different. The band are dressed in traditional robes, seated around a campfire, picking out a doleful, hypnotic pattern on acoustic guitars. Although the song explodes into life with a holler halfway through – with the campfire tableaux giving way to scenes of exuberant sword-dancing and a jeep barrelling across the sand – the message is clear. This is a deliberate restatement of Imarhan’s Tuareg roots, a sign of their commitment to the music and traditions of their semi-nomadic people.

While Imarhan were forced to record previous albums abroad owing to a lack of suitable facilities, in 2019 they took matters into their own hands and began building their own studio in their home city of Tamanrasset, in Algeria’s Saharan south. Aboogi is the first fruit of that endeavour, and as a result of being able to work on home turf, on their own clock, it’s more relaxed and airy than the preceding Temet, with the focus on acoustic instruments, goatskin percussion and massed vocals chants.

But that doesn’t mean Imarhan have mislaid their pop smarts. “Derhan” (“Hope”) is an infectious, accelerating anthem powered by handclaps and funky Richie Havens-style strumming, while the slow-burning “Temet” (“Relations”) constructs a snaking, hypnotic groove around which wisps of psychedelic guitar curl and fade. Even “Laouni”, a cyclical paean to an estranged lover, quickly lodges in your brain despite its counter-intuitive rhythm and lack of rock heft.

The music instantly conveys a strong sense of defiance in the face of sorrow, a feeling that is confirmed when you read the startling English translations of some of Sadam’s lyrics. “This year I saw the unimaginable”, he sings in his native Tamasheq. “The Devil walking about in broad daylight… An old man distraught… No-one is left here”. Abdallah Ag Alhousseyni’s visceral tale of battlefield defeat on “Tindjatan” is complemented by Sadam’s articulation of the Tuareg people’s present-day struggles under the various national governments who control their homelands. “They want us to stay ignorant”, he rails calmly on “Assossam”. “They don’t care what happens to us”.

While Aboogi pulls back from the slicker, crossover sound suggested by Temet, it’s by no means an insular record. Tinariwen’s last album Amadjar showed how sympathetic fellow travellers such as Warren Ellis and Cass McCombs could be profitably welcomed into the fold without having to change course, and Aboogi boasts a couple of winning cameos of its own. The appearance of Sudanese vocalist Sulafa Elyas, exchanging verses with Sadam on the exquisitely desolate “Taghadart” (“Betrayal”), provides one of the album’s highlights, as she sings gorgeously in Arabic about “the size of emptiness”. Initially, Gruff Rhys’ guest turn on album closer “Adar Newlan” might seem more incongruous, but his gently stirring hymn to the universal pleasure of “te cryf” (Welsh for “strong tea”) meshes perfectly with Imarhan’s distinctly double-edged depiction of desert life and “rocks that are full of fear/Full of buried secrets”.

Ultimately, Aboogi leaves a rather melancholy trace. It’s always going to be tough to unequivocally celebrate your hometown when the everyday reality is poverty and disenfranchisement. But as Sadam says, Imarhan’s music aims to bring those issues to wider attention while simultaneously representing the richness of their culture – a feat that Aboogi pulls off with passion, skill and no little style.