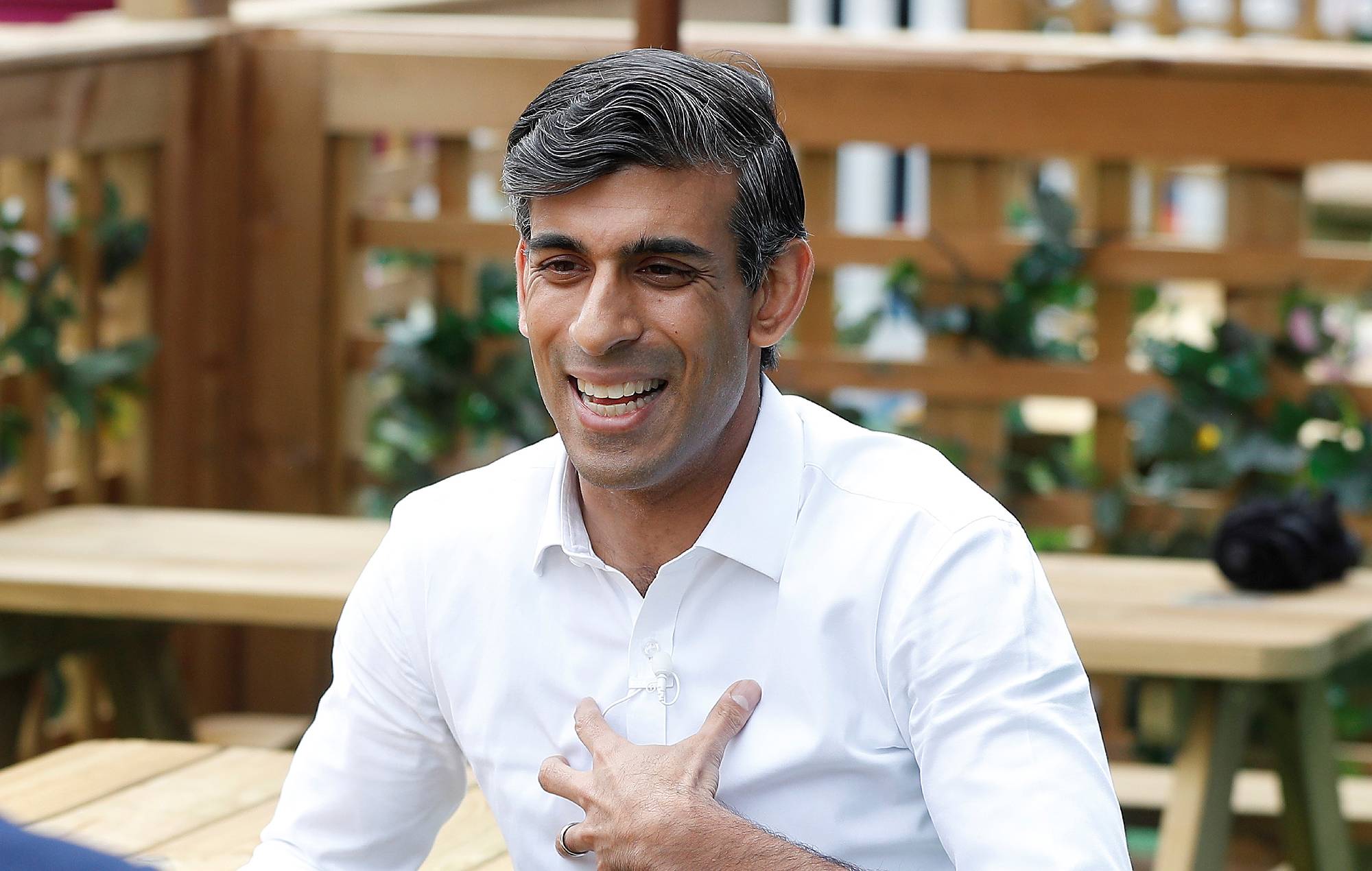 Industry hit back at Rishi Sunak’s defence of government’s approach to music, Brexit, clubs and venues

Figures from the music industry have hit back at Chancellor Rishi Sunak’s and the government’s handling of the Brexit touring fiasco – as well as potential future provisions for nightclubs and music venues.

This week saw a huge backlash to the government’s claims of victory in ‘announcing’ that “short term” visa-free travel without work permits will be allowed for musicians and performers in 19 European countries, while talks are ongoing with the remaining nations. They were soon accused of “spin”, “gaslighting” and “meaningless posturing”, as the information wasn’t particularly new and the same challenges remain for UK artists and their road crew wishing to tour through Europe post-Brexit.

However speaking to NME yesterday ahead of the announcement of the new £750million government-backed insurance scheme for gigs and festivals, Chancellor Rishi Sunak doubled down that this was “really, really good news” for UK touring artists.

When NME asked if he’d financially back the proposed export office specifically to help UK artists tour and promote their music overseas, Sunak replied: “We already have existing budgets that the Department For International Trade run to help promote exports of all types. We do want to help support companies export products around the world and we do put a lot into that.

“We’re opening up new markets, and that’s part of our post-Brexit future – to create strong links with other markets. For example, the terms that we’ve agreed with Australia allow for an increased amount of mobility for young people between our countries, which is something that young people will value, particularly within this industry which has a lot of young people working in it.”

When quizzed on if there would be more significant financial support to aid UK artists and crew overcome the obstacles brought about by Brexit, Sunak told NME: “I can’t talk about what might or might not be in future budgets, but do we care about the creative industries? Do we care about the cultural industries? I think you can judge from our track record over the last 12 months that we really do.”

He continued: “We’ve created a government-backed live events insurance scheme, which essentially doesn’t exist in any other country. We’ve looked hard, and no one else has done anything like this to support their industry. It’s world-leading and a world first. The Cultural Recovery Fund hasn’t been matched by any other country.

“That should give people a lot of confidence that this is a government that really cares and wants to support the people in the industry and the industry overall, because we recognise its value to the country.”

Turns out that despite “extensive discussions” by @DCMS precisely nothing has changed to help UK musicians needing permit/visa-free EU touring. Shameful of @OliverDowden to seek to mislead beleaguered UK musicians. Task for his dept is to sort the problem which remains unchanged. https://t.co/idqIZuwBAz pic.twitter.com/TotyHRNIpj

After MP Harriet Harman’s letter attacking the government’s “misleading” statement about the future of post-Brexit touring, Featured Artists Coalition CEO David Martin has accused them of “failing to deliver on the repeated promises made to our industry during negotiations with the EU”.

“Despite this, senior political figures including the Prime Minister have spent 2021 promising to rectify the barriers we now face to tour in Europe,” Martin told NME. “However, today’s comments from the Chancellor to the NME represent a fundamental shift in tone, with what appears to be a firm rejection of the calls on Boris Johnson’s Government to solve the crisis that it has put our £6billion industry in.”

He went on: “Political leaders have made claims about ‘working flat-out’ to deliver long-term solutions for touring, which is why we have called for an interim Transitional Support Package (TSP). However, with today’s comments from Rishi Sunak, it is clear that this Government neither understand nor value our industry, one in which really we are, to coin a favourite phrase of the PM himself, ‘world-beating’.

Martin added: “Pointing to Australia which is 10,000 miles away and less than half the size of Spain and wilfully conflating the purpose of the Culture Recovery Fund, which was implemented to support the industry during the pandemic, not to support EU touring, just adds insult to injury.

“Today’s comments from the Chancellor will be met with disbelief in our industry. If the Government is genuine in its claims about supporting British music, it must deliver the TSP and find renewed energy at the most senior political level to tackle this issue before it is too late.”

NME also asked Sunak to respond to the call to provide more relief for the UK’s grassroots music venues so that they can invest more in young talent and meeting the challenges of restrictions. One such measure has been to scrap business rates for them, just as has been done for museums and art galleries.

“It’s tough for me to comment on tax policy outside of budget, so I hope you’ll forgive me for that, but I would say that we have provided an enormous amount of support through the business rate system – both last year and this year,” Sunak told NME. “In total, it’s probably almost going to be worth £20billion by the time we’re through.

“Lots of small venues probably already don’t pay business rates because they benefit from small business rate relief. I am cognisant of the burden, but we have done a lot on that this year and last year that will help with that.”

“Grassroots music venues are a part of the cultural fabric, just like theatres, arts centres, museums and galleries,” Davyd told NME. “Any system of taxation that removes money from one part of our cultural fabric but leaves it in place elsewhere isn’t an equitable tax and risks being seen as elitist.

“The most important work grassroots music venues do is to invest in new and emerging talent. MVT isn’t asking that those venues be treated differently, or better than any other part of culture – we are simply requesting that they be treated the same so that they can invest more money in that primary purpose.”

Davyd added: “The Treasury previously recognised this point in January 2020 when Business Rates for grassroots music venues were reduced by 50 per cent. We strongly urge the Chancellor to consider the future of Business Rates across cultural activity and to ensure that any review of that sector includes grassroots music venues as has been previous government policy.”

The UK’s nightclub scene have been very vocal since the start of the pandemic about a supposed lack of support from the government – with many clubs and workers falling through the cracks of a number of initiatives. Further challenges lay ahead with clubs expected to require COVID passports from September, despite eight out of 10 nightlife spaces refusing the idea.

“Nightclubs have received business rates holidays and lots of cash grants throughout this, and they’ve had access to discounted loans, so I wouldn’t say that they’ve fallen through the cracks,” Sunak told NME yesterday. “They’ve received a lot of support. It has been really difficult for nightclubs because they haven’t been able to open. I appreciate that.

“I think this scheme could work for nightclubs as lots of them put on concerts and particular events. This is for live events. For the nightclubs that do that, they’ll be able to use this scheme.”

However, Night Time Industries Association director Michael Kill argued that much more needed to be done – and that the new government-backed insurance scheme would still fall short for many clubs.

“Nightclubs and venues have been at the sharp end of this pandemic, alongside festivals and events, the support up until July from Furlough has been welcomed, but from July when when these businesses have had to contribute to the scheme, with the biggest proportion of staff on furlough will have greater contributions to make at a time when they are not receiving any revenue has been an ongoing challenge,” Kill told NME.

“Government loans and Local Authority grants have been tough to access, and considerably disproportionate to operating costs for many businesses, and there has been a void in terms of businesses without premises, in particular supply chain which has led to many taking up considerable debt to ensure their businesses do not collapse. This will take years to pay back alongside standing operating charges which have built up and will be ongoing.”

He added: “In terms of the Re Insurance policy introduced by Government today, this has without a doubt been welcomed and will be of benefit to cultural businesses that sell advance tickets for events, for some too late, but will as we understand only activate under complete lockdown, leaving partial restrictions uncovered, as well as commercial nightclubs which are not subject to advance tickets and reliant on spontaneous visits from customers outside of this scheme.”

Yesterday’s news of the government-backed festival and events COVID insurance scheme was widely welcomed by the music world, while a number of figures argued that it had all come along too late. The scheme will run from September this year (when festival season is mostly over) through to September 2022.

Back in May, UK festivals issued a “red alert” warning amid claims that they had “hit a brick wall” in government talks for an insurance plan – before it emerged that more than half of the UK’s festivals had been cancelled in 2021 due to uncertainty around operating with coronavirus restrictions. Insurance has been long overdue, as many events would face bankruptcy if forced to cancel again at the last minute having already suffered huge financial blows last summer. Commercial insurers have not been able to provide such a service until now.