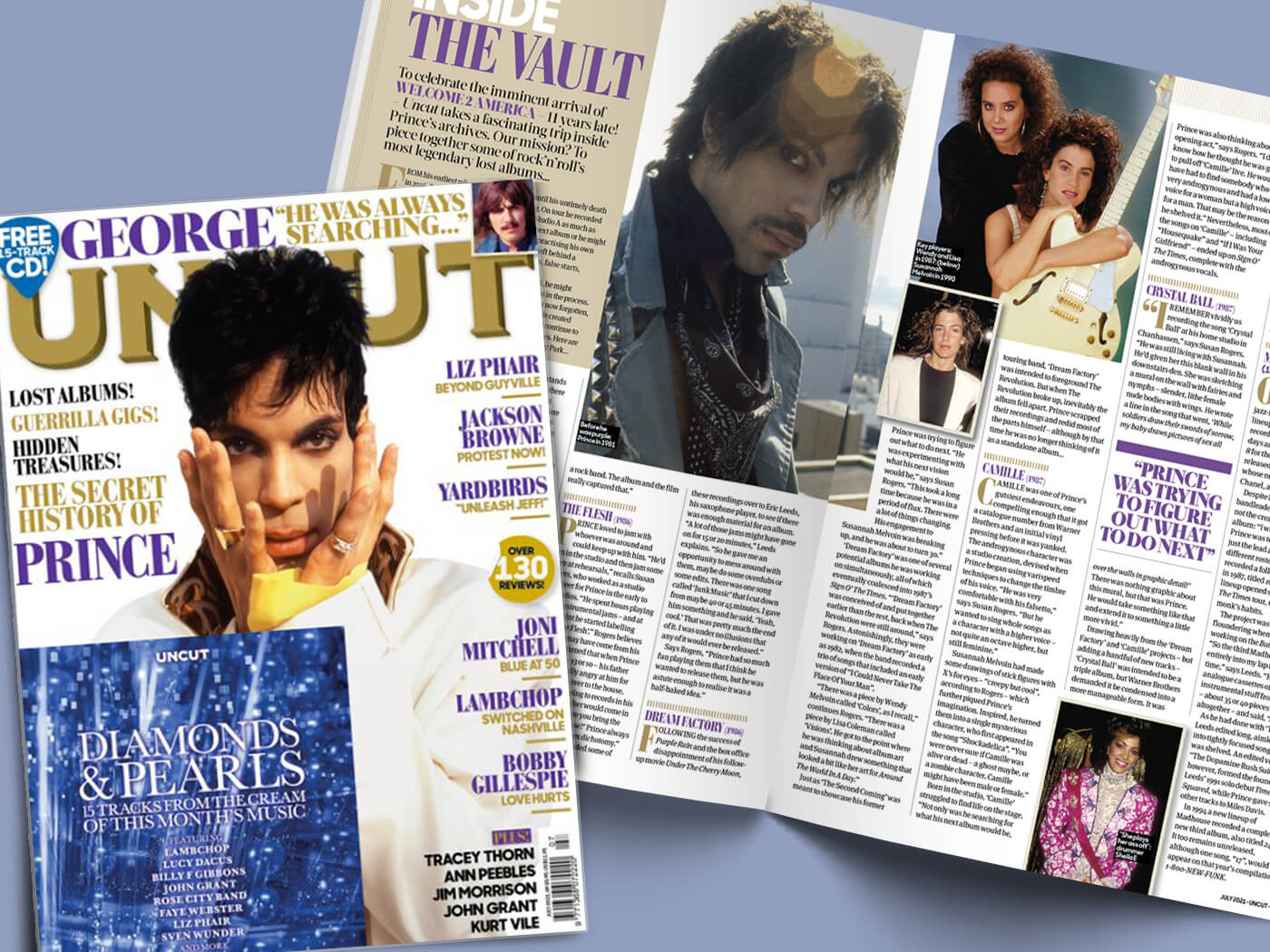 To celebrate the imminent arrival of Welcome 2 America, the latest issue of Uncut takes a fascinating trip inside Prince‘s archives. Our mission? To piece together some of rock’n’roll’s most legendary lost albums.

From his earliest releases in the late 1970s until his untimely death in 2016, Prince was obsessed with recording. On tour he recorded every show; at home he was in Paisley Park Studio A as much as possible. He might be trying to assemble his next album or he might be taking notes, writing songs, goofing off, or practising his own purple brand of mad science. That work ethic means he left behind a legendarily massive vault crammed full of alternate takes, false starts, cul-de-sac jams and more than a few “lost” records.

Because he thought one and sometimes two albums ahead, he might abandon a project on a whim – no matter how far along he was in the process. His motives for scrapping an album were often never known or now forgotten, but in most cases Prince simply moved on to the next big idea. He created albums faster than he could release them. But those lost albums continue to provoke endless what-ifs and conjure countless alternate timelines. Here are some of his most notorious albums that never made it out of Paisley Park…

Prince filmed every show on the Controversy tour in 1981 and 1982, usually on a fairly primitive VHS camera set up next to the soundboard. “We would watch the tape every night on the bus,” recalls keyboard player Matt Fink. “He would point out mistakes or things we did well. That’s how we learned and improved the shows.”

Their stop at the Met Center in Bloomington, Minnesota, stands out because, unexpectedly, there were real cameras there and a professional film crew to capture their performance. It transpires they were recording a live album and a concert film – ‘The Second Coming’, a remarkable, if lost, snapshot of a transitional period in Prince’s career.

At the time, Prince and his band were playing some of their best shows as they upgraded to bigger venues. “Even when we were playing in clubs, we played like it was a coliseum,” says Dez Dickerson, Prince’s touring guitarist. “So the span between Controversy and 1999 was an age unto itself. It wasn’t just two different planets, it was two different galaxies!”

A fully edited version of the concert film was created – but Prince scrapped it to focus on 1999 and another film project that became Purple Rain. “There was so much time and effort put into it,” says Dickerson. “It was a fully polished, meticulously thought-through live album and a well-executed film. Prince never wanted us to be frontman and sidemen. He wanted us to bea rock band. The album and the film really captured that.”

Prince loved to jam with whoever was around and could keep up with him. “He’d jam in the studio and then jam some more at rehearsals,” recalls Susan Rogers, who worked as a studio engineer for Prince in the early to mid-1980s. “He spent hours playing these instrumental jams – and at some point he started labelling them ‘The Flesh’.”

Rogers believes the name may have come from his father. “I learned that when Prince was young – 13 or so – his father would get really angry at him for bringing girls over to the house. They’d be listening to records in his room and his father would come in and say, ‘How dare you bring the flesh into this house?’ Prince always had that religion/sex dichotomy.”

Eventually he handed some of these recordings over to Eric Leeds, his saxophone player, to see if there was enough material for an album. “A lot of those jams might have gone on for 15 or 20 minutes,” Leeds explains. “So he gave me an opportunity to mess around with them, maybe do some overdubs or some edits. There was one song called Junk Music that I cut down from maybe 40 or 45 minutes. I gave him something and he said, ‘Yeah, cool.’ That was pretty much the end of it. I was under no illusions that any of it would ever be released.” Says Rogers, “Prince had so much fun playing them that I think he wanted to release them, but he was astute enough to realise it was a half-baked idea.”

Following the success of Purple Rain and the box office disappointment of his follow-up movie Under The Cherry Moon, Prince was trying to figure out what to do next. “He was experimenting with what his next vision would be,” says Susan Rogers. “This took a long time because he was in a period of flux. There were a lot of things changing. His engagement to Susannah Melvoin was breaking up, and he was about to turn 30.”

‘Dream Factory’ was one of several potential albums he was working on simultaneously, all of which eventually coalesced into 1987’s Sign O’ The Times. “Dream Factory was conceived of and put together earlier than the rest, back when The Revolution were still around,” says Rogers. Astonishingly, they were working on Dream Factory as early as 1982, when the band recorded a trio of songs that included an early version of I Could Never Take The Place Of Your Man.

“There was a piece by Wendy Melvoin called Colors, as I recall,” continues Rogers. “There was a piece by Lisa Coleman called Visions. He got to the point where he was thinking about album art and Susannah drew something that looked a bit like her art for Around The World In A Day.”

Just as ‘The Second Coming’ was meant to showcase his former touring band, Dream Factory was intended to foreground The Revolution. But when The Revolution broke up, inevitably the album fell apart. Prince scrapped their recordings and redid most of the parts himself – although by that time he was no longer thinking of it as a standalone album…

Camille was one of Prince’s gutsiest endeavours, one compelling enough that it got a catalogue number from Warner Brothers and an initial vinyl pressing before it was yanked. The androgynous character was a studio creation, devised when Prince began using varispeed techniques to change the timbre of his voice.

“He was very comfortable with his falsetto,” says Susan Rogers. “But he wanted to sing whole songs as a character with a higher voice – not quite an octave higher, but still feminine.” Susannah Melvoin had made some drawings of stick figures with X’s for eyes – “creepy but cool”, according to Rogers – which further piqued Prince’s imagination. Inspired, he turned them into a single mysterious character, who first appeared in the song Shockadelica. “You were never sure if Camille was alive or dead – a ghost maybe, or a zombie character. Camille might have been male or female.”

Born in the studio, Camille struggled to find life on the stage. “Not only was he searching for what his next album would be, Prince was also thinking about his opening act,” says Rogers. “I don’t know how he thought he was going to pull off Camille live. He would have had to find somebody who was very androgynous and had a low voice for a woman but a high voice for a man. That may be the reason he shelved it.” Nevertheless, most of the songs on Camille – including Housequake and If I Was Your Girlfriend – ended up on Sign O’ The Times, complete with the androgynous vocals. 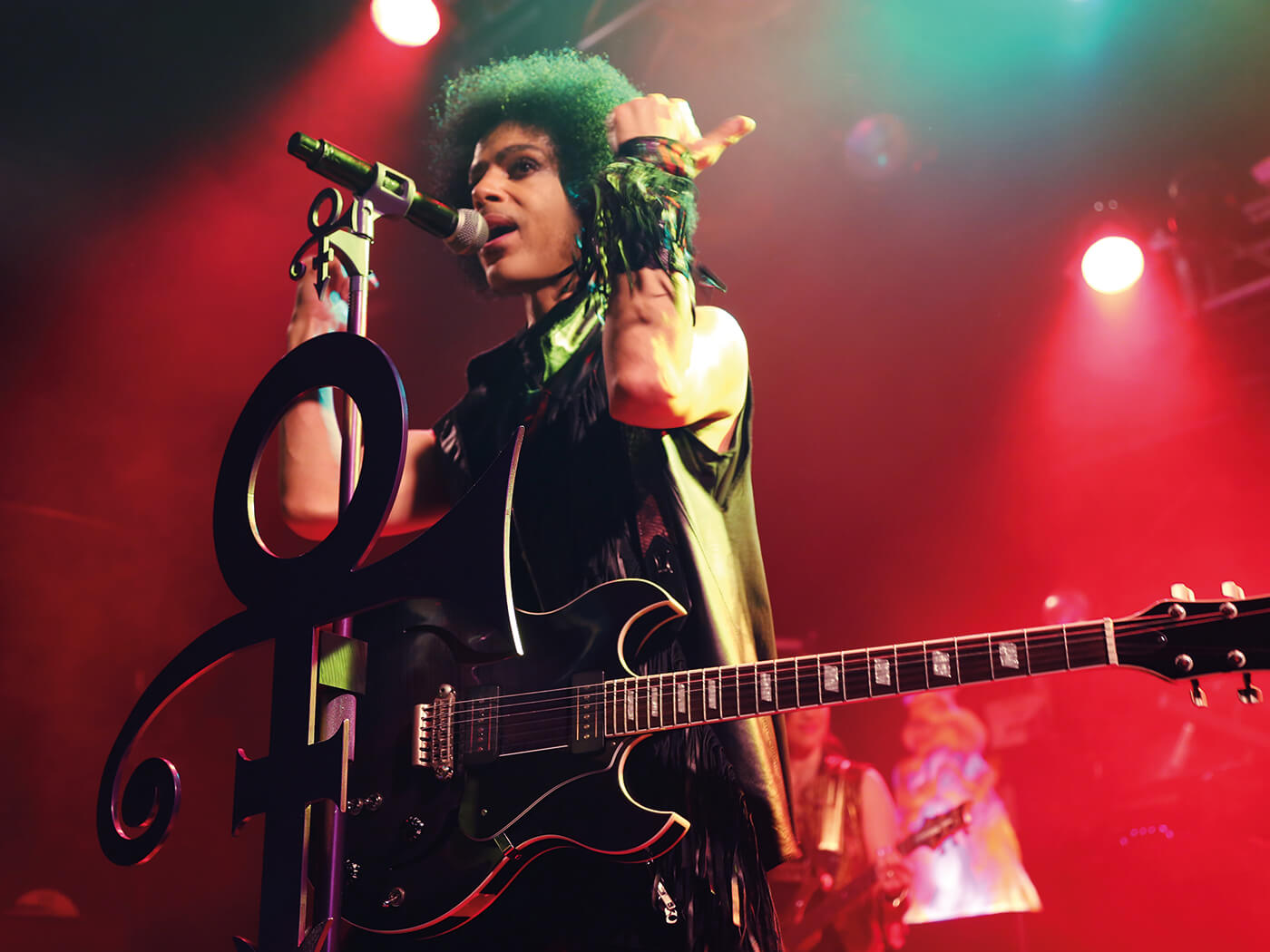 “I remember vividly us recording the song ‘Crystal Ball’ at his home studio in Chanhassen,” says Susan Rogers. “He was still living with Susannah. He’d given her this blank wall in his downstairs den. She was sketching a mural on the wall with fairies and nymphs – slender, lithe female nude bodies with wings. He wrote a line in the song that went, ‘While soldiers draw their swords of sorrow, my baby draws pictures of sex all over the walls in graphic detail!’ There was nothing graphic about this mural, but that was Prince.
He would take something like that and extend it to something a little more vivid.”

Drawing heavily from the Dream Factory and Camille projects – but adding a handful of new tracks – Crystal Ball was intended to be a triple album, but Warner Brothers demanded it be condensed into a more manageable form. It was trimmed to 15 tracks and retitled Sign O’ The Times, with the remaining tracks showing up on B-sides and subsequent albums. One purported highlight called In A Large Room With No Light was a holdover. “That was one of Wendy and Lisa’s songs,” recalls Eric Leeds. “I’m hard pressed to think of anything else in Prince’s catalogue that sounds like it. Sheila E plays her ass off on it. There’s an out vamp and she’s does these drum fills that are just terrific. I suspect Prince never did anything with it at that time because it was around the time when Wendy and Lisa left the band.”