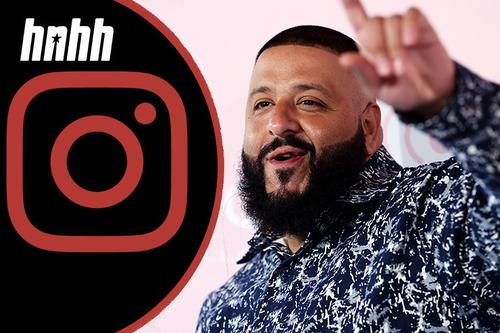 DJ Khaled has spread nothing but #MogulTalk, good vibes and positivity throughout the entirety 2017. The radio personality turned gilded producer turned We The Best Music Group record label founder took his Internet hype man status to new levels this last year with his impressive collection #MajorKey drops. Between gifting his millions followers with these keys to success in both business and in day-to-day trials, Khaled proved he was unable to catch an L in his own pressional ventures as well.

The Miami-based A&R god teased the in-studio progress his tenth studio album Grateful as well as the involvement potential collaborators by flashing short clips stars like Chance the Rapper, Justin Bieber, Migos, and Mariah Carey on Snapchat. Following the release  Grateful’s lead single “Shining” featuring vocals by both Beyoncé and Jay-Z, the mogul dropped the rest the album on June 23 to instant commercial success. Executive produced by his one-year-old son Asahd, Grateful debuted at No. 1 on the US Billboard 200 and was quickly certified RIAA platinum.

Alongside his pressional wins, Khaled took great joy in spreading the meme-giving love shared between himself and his son on Instagram, marking each developmental milestone with an emotional caption that almost always ended with the DJ giving praise to the most high. Between enjoying the highs fatherhood, announcing a 2018 tour with Demi Lovato titled Demi x Khaled and teaming up with fellow mogul Diddy on their wildly successful Ciroc campaign, Khaled managed to slip in a number inspirational IG posts to spread the #FanLuv to his followers.

In the words the boss himself, he’s the best to have ever done it. Need further pro? Look no further than this gallery that “THEY” don’t want you to see.

The Sun Always Finds Him

With his relentless optimism and personal relationship with the “most high,” DJ Khaled can turn even a simple car ride into a testament blessings. Out cruising on a sunny day, Khaled can’t help but note how the sun will go through “metal, buildings and clouds” to shine on him.

For the record-breaking producer, there’s nothing more important than showering yourself with self-love so as to reach that “next level vibe.” If you’re overcome by the truth bombs dropped by Khaled–don’t worry, there’s nothing wrong with shedding tears joy–the mogul admits to doing just that on “many nights.” In short, be sure to peep this key if you want to get bombarded with blessings.

Start The Day The Khaled Way

In Khaled’s world non-stop grinding, the early bird gets the millions. Shedding more light on his path to success, the producer reveals he starts the day by “handling what he needs to handle” and making sure his vibe is the first thing his team sees and feels. Surrounding himself with greatness, there’s only one thing he CAN be – grateful.

Khaled inspired his followers to keep grindin’ and stay focused by bringing in some words wisdom from the #BlackExcellence icon and mogul extraordinaire himself, Diddy. Apparently, the key to riding in a lit-up Wraith is to never stop and to outwork everyone.

What It Means To Be #GRATEFUL In Khaled’s World

During an interview for the LA-based radio station 92.3, Khaled revealed that the origins Grateful ran much deeper than just the meaning the word itself. “Grateful is a real feeling for me because also my son, he’s my biggest blessing that God has given me…and he’s the executive producer the album but at the same time–my life changed in so many ways,” he said.”As grateful as I’ve always been in my life, there’s really no words that can explain how grateful I am for my son, and all ] the blessings.”

Just So You Know

In what was clearly another key drop, Khaled urged his followers to never burn bridges because “Only God can walk on water.” Inspiring his fans to build each other up in a shared, mutual quest toward greatness the producer once again proved he is a supporter the “good vibes only” philosophy.

Cementing his status as the forever-positive hype man supreme, Khaled proved he is willing to go all out to inspire his followers-even readily dropping some “Lion Talk” on those who will listen to his message. “Take time, big yourself up and others…be grateful for people that gave you and give you opportunities, be grateful for those that help you even if you decided to go different ways but always know the right way is to be grateful,” he wrote.

Of all people, course, DJ Khaled is one to enjoy the simple “tings” and to stop and smell the flowers–literally. Another key? Respect your mother, and find inspiration from tuning yourself into the power nature.

DJ Khaled certainly has a lot to be grateful for when it comes to the commercial success his 2017 collection the same name. With three No. 1 singles f the same album and an RIAA-certified plaque to match, Khaled blessed up to his fans and to the most high in celebration reaching this milestone.

While most people would be stressed out by getting stranded on a jet ski with no clear path to freedom, DJ Khaled just views it as another one life’s invaluable learning lessons. Roadblock? No problem – the key is to overcome it.