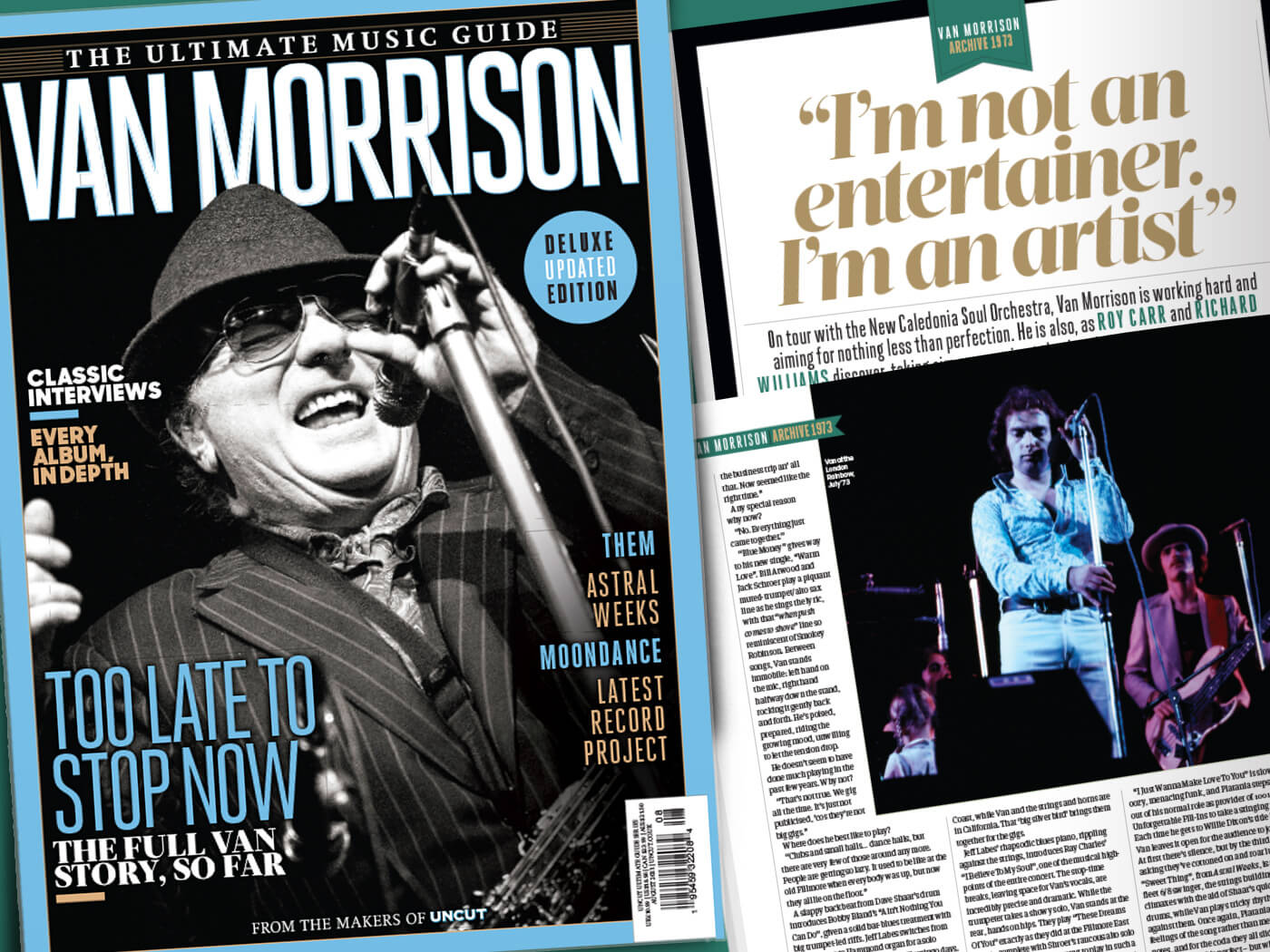 It’s the burden of a legendary performer to be a figure on whom everyone has an opinion. Some rise above it all, the books, the speculation, because they’re the ones who know the real story and, after all, what’s the harm?

Not so Van Morrison. A musician with a particularly acute wish to retain ownership not only of his process, but also of discussion of his process, he is not someone to let it lie. He’s no fan of biographers, being as they often are reliant on the testimony of individuals other than Van Morrison. Never precisely welcoming, he’s also become increasingly exacting with the reporters sent to uncover the stories behind his new records.

As you’ll read in this deluxe Ultimate Music Guide, in which we match up in-depth reviews of Van’s extensive catalogue with a series of lively – sometimes to the point of challenging – archive interviews from throughout his career, this can often take some slightly bizarre turns. In Uncut’s two most recent encounters with Van, the issue is raised of the manner in which the composer is able to guide his musicians across gradually unfolding compositions which arrive at transcendent heights, with seemingly little direction.

Van is having none of that. “That’s rubbish, for a start,” he tells David Cavanagh in 2017. “It’s makey-up. Fake news.” Courteously, but clearly unwilling to be the person that allows Morrison to flatly deny his own genius and undermine the legend of his sylvan and free-flowing 1970s classics, David quietly insists that all things considered, there must have been some kind of genius at work. Here Van and he come to a kind of compromise – Van seems ok with that idea, as long as it’s acknowledged that there was always a structure to the music, that it didn’t magically appear.

As you read in the following pages – updated to include an appraisal of Van’s recent surge of prolific creativity – and relisten to his albums, it’s worth bearing that insistence in mind. Not least because this is music which retains a magical quality, in spite of its maker’s recent insistence on stressing the nuts and bolts. Each chapter is quite different to the last but takes its place as a subtle movement in a much larger body of work.

Lately, I’ve been most drawn to Common One, a record which doesn’t begin so much as imperceptibly materialise with the song Haunts Of Ancient Peace. It appears almost inexplicably, like a miraculous change in expression on a religious statue, suddenly noticed by local people. As you’ll likely know, Van follows this song up with Summertime In England, an atomised 15 minute soul number in which the singer riffs on James Joyce, Wordsworth and Coleridge. “Why…” the song asks again and again, only to be answered, “…it just is.” It’s the sort of album you could rhapsodize about ad nauseam.

Van himself doesn’t really go in for that kind of thing. “I felt that we were on to something on that album, with that particular group of musicians,” he told Uncut’s Graeme Thomson last year. “The songs and the musicians and the way the thing happens sort of dictate the direction.”

Buy a copy of the magazine here. Missed one in the series? Bundles are available at the same location.