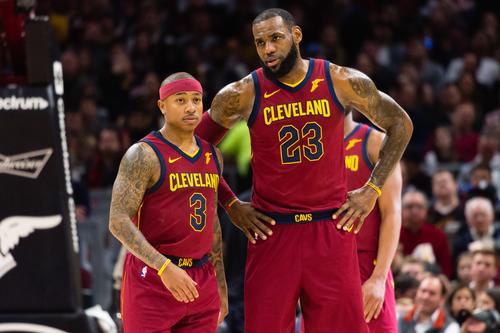 After months rehabbing his injured hip, Isaiah Thomas finally made his season debut Tuesday night for the Cleveland Cavaliers at home against the Portland Trailblazers. Coming f the bench and entering the game mid-way through the first quarter, Isaiah was welcomed to a standing ovation from the home crowd as he walked out onto the court.

“It was a special moment,” Thomas said the reception. “I haven’t played in a game and you would think I was here for a few years and playing and battling in Finals with this team, but it was special for my family to be here, my wife and kids to see that, that’s genuine love right there and I appreciate them patiently waiting and giving me the love they did tonight.”

Being eased into the lineup, Isaiah was on a minute restriction Tuesday night and played a total 19 minutes, but managed to score 17 points (6-for-12) and 3 assists in that little time.

“It was a special night for me,” Thomas said afterwards. “I haven’t played in seven months, so to be able to be out there and compete against another team was special. Obviously to get the win was even bigger but just to be able to compete and be out there in a game setting, it was a great feeling for myself.”

It’s safe to say LeBron was happy to have I.T. back in the lineup as well. “He’s very good, very good,” James said. “Very dynamic. Can shoot the pill. Can get in the lane. Can pass the ball. He’s going to just create so much for our team.” James also credited Thomas’ mentality.

“What I like most about him is he has a chip on his shoulder for life,” James said. “That’s just who he is. When a guy’s got a chip on his shoulder for life he ain’t going to, he’s never going to not work hard. Not going to never give it his all. Not going to never disappoint you. Now basketball, you miss shots and things that nature, and we’re not worried about that. You make turnovers, all that, that’s not what I’m saying, but a guy like that he’s going to always put in the work. And when you put in the work the game is going to always give back to you.”

RELATED: Watch Isaiah Thomas React To The News That He’s Been Traded To Cavaliers

Check out the standing ovation & highlights from IT’s first game as a Cavalier (below).