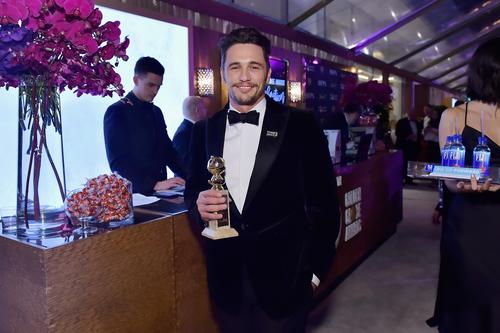 Following his win for Best Actor at the Golden Globes this past weekend, James Franco has seen a fury sexual harassment and misconduct claimed pinned against The Disaster Artist star. It all began when Franco was seen wearing a pin promoting the Time’s Up movement to the ceremony, which prompted some Twitter reactions from past victims his alleged abuse and inappropriate behaviour.

Since those initial comments, at least 5 women have now stepped forward to publicly detail their experiences with Franco, and the particularly shady conduct enacted by the now disgraced actor/director/scholar.

Speaking with The Los Angeles Times, Sarah Tither-Kaplan, one Franco’s former acting students at the film school he founded, details the abuse she endured while on-set with him. Tither-Kaplan recalls a time when she and several women were filming a nude orgy scene with Franco three years prior to the interview, and how the actor removed the plastic pieces covering the women’s vaginas while he simulated oral sex on them. Tither-Kaplan goes on to note how she felt there was an “abuse power, and there was a culture exploiting non-celebrity women, and a culture women being replaceable,” which was perpetuated by men like Franco.

Furthermore, two other acting students have also detailed their experiences with Franco’s unsettling behaviour. Hillary Dusome and Natalie Chmiel tell the LA Times about a time when the actor stormed f a set because the scantily-clad actresses on set refused to remove their lingerie and expose their fully nude bodies. Katie Ryan, another former acting student, reveals the mass emails she received from Franco to audition for roles as prostitutes or hookers, as he always objectified and sexualized his female cohorts.

This recent expose sheds light on the controversial star, and the past behaviour that has tainted many girls’ experiences in Hollywood and the acting world.