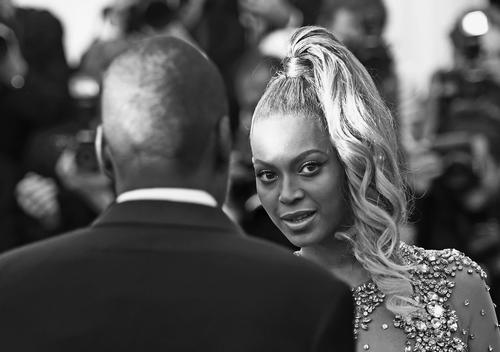 It was reported that Bey and Jigga Man were shooting the sequel to “’03 Bonnie & Clyde” in beautiful lush Jamaica on the Tuff Gong ranch made famous by Bob Nesta Marley. TMZ uncovered pictures the couple touring on a motorbike in retrit jumpers. No greater metaphor exists for couples sticking through thick and thin, than a good motorcade, hands on hip.

Fast forward to today, the couple are still shooting for their On the Run II tour, in the same getup, except in this case the motorcycle is outfitted with a giant bull skull and horns for added grit.

TMZ reports that in between shoots, the pair have been “catered to hand and foot” by their production crew. s depict a bearded production assistant blocking the beating sun from their magisterial heads. They seem all too comfortable making on set demands, and why shouldn’t they. They foot the bill.

“03 Bonnie & Clyde” portrayed the couple in their honeymoon phase on a collision course with the law. This go-around they are seasoned and well-spent, so it goes to figure what they will choose to depict their romance, in the eyes the adoring public who want nothing more than to see this fairy tale persist through the ages.