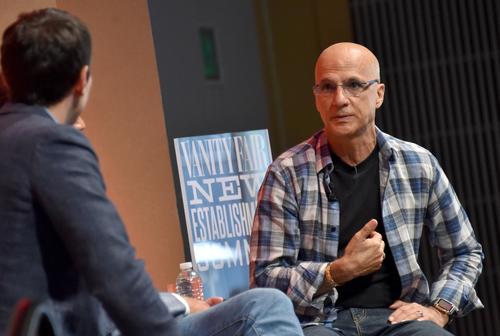 For the past week or so, rumors have been circulating online that Jimmy Iovine is leaving Apple Music in August, but it turns out that’s not necessarily true. On Tuesday, Jimmy made a statement to Variety denying the rumors him leaving the conglomerate streaming service.

“I am almost 65, have been with Apple for four years, and in two and a half years, the Apple Music] service has gotten to well over 30 million subscribers and Beats has continued its successful run,” he said. “But there’s still a lot more we’d like to do. I am committed to doing whatever Eddy Cue], Tim Cook] and Apple need me to do, to help wherever and however I can, to take this all the way. I am in the band.”

During a new interview with Scott Goldman, the Grammy Museum and Foundation executive director, Jimmy added, “All this stuff you’re seeing in the newspapers, let me tell you, my stock vested a long time ago. We need Donald Trump here to call it ‘fake news.’”

While Jimmy made it clear his run in the music industry is winding down, he said he’s still committed to working with the guys at Apple Music and getting Streaming to the masses.

“I don’t see myself at 75-years-old running around doing music. Eventually I’ll be slowing down. But right now, I’m committed to getting streaming right.” Iovine added, “The next chapter, whatever intensity I’m working, will be to help streaming come to scale.”

So for now, it doesn’t look like Jimmy is leaving Apple Music, but we’ll be sure to let you know otherwise if something further develops or arises.