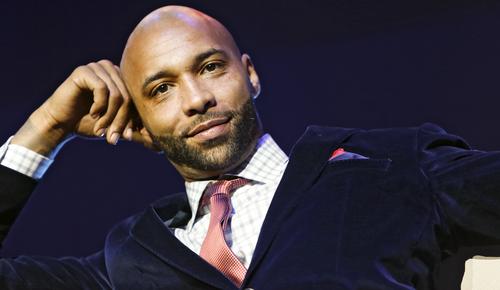 Joe Budden and Charlamagne Tha God teamed up together for a year-end special on Revolt TV, analyzing what was “dope” and what was “trash” from the past year, and inciting some reactions in the process. Surrounding the special, reports started to swirl that Budden had inked himself a $5 million podcast deal with the Diddy-helmed platform. Budden would shrug f the rumors on a recent podcast episode, but it looks like there was some truth in them after all — although we’re not sure if the amount is actually $5 million, Budden confirmed during a New Year’s Eve party last night that he is working with Revolt.

Diddy hosted a lavish NYE part, with Budden in attedance. The two took some time to formally announce their deal together, while also discussing blessings the past year. In the video below, Budden tells Diddy, “I got a brand new baby, her eyes, I’m blessed, but the baby looks like me, he’s healthy, eight pounds, eats a lot, he’s not a crier, he sleeps. This year has been the best year my life.”

Diddy gruffly interrupts, “I needa ask you a question, are you ready to get money with me?” He also questions Budden about his relationship with Migos “cause they got the culture right now.” Budden says, “I love them” before wishing “Lord Quavius” a happy new year.

Are you ready for what’s to come from Budden x Revolt? Stay tuned.