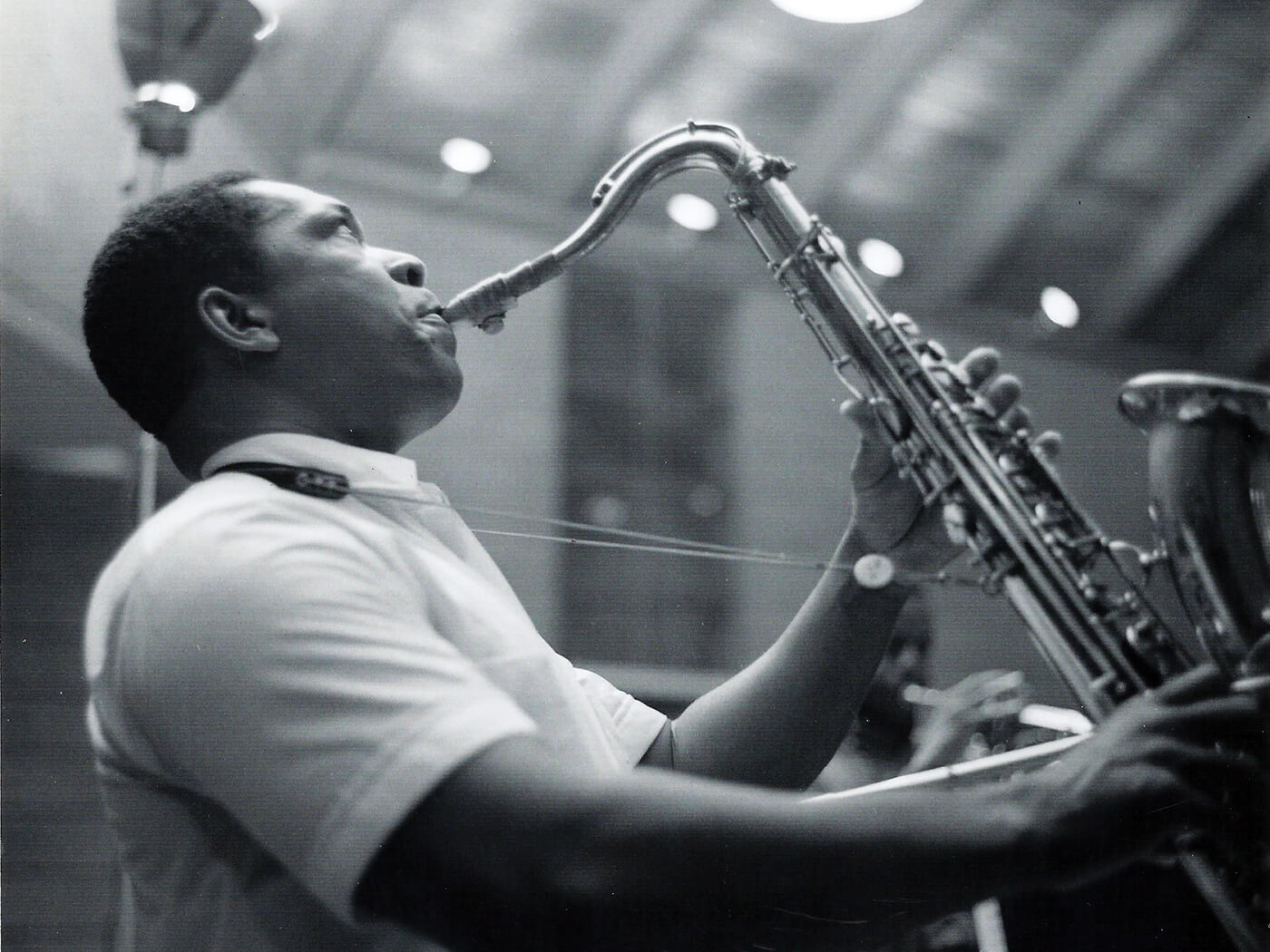 He was large and gentle, Melody Maker reported, most unlike his music. Rather than busy and animated, the John Coltrane who played host to the musician and writer Mike Hennessey in a French hotel room was placid, devotional and calm. He unselfconsciously rehearsed his music for an hour. He ate a meal of egg yolks, soup, peaches and water, and spoke of “rediscovering” God.

His still waters hid strong currents. A month before, Coltrane and a cast of 10 additional players had recorded the freeform Ascension album, a fierce unison blowout based on a simple bluesy reveille. The previous night, meanwhile, Coltrane and his quartet had baffled the audience at the Antibes Jazz Festival by playing his piece A Love Supreme in its entirety, pushing at its boundaries and busting them with 15 further exploratory minutes. The audience and organisers, expecting polished sophistications, instead found themselves witness to an ongoing search.

A Love Supreme was recorded on December 9, 1964. In another corner of the music world, Ringo Starr was in hospital recovering from tonsilitis, while Coltrane and his quartet – Elvin Jones (drums), McCoy Tyner (piano), Jimmy Garrison (bass) – in one session created a jazz suite that hoped to acknowledge and give thanks to God for guidance. The piece is built on a recurring four-note theme murmured by the group, then departs on a journey that feels spiritual but also seasonal. Something substantial is planted on Side One (Acknowledgement/Resolution) and this then bursts into flower on the freer and more far-reaching group playing on the second side (Pursuance/Psalm).

It was a composed piece, serious from the opening gong to the ecclesiastical titling. Everything from the solemn overdubbed Coltranes of Acknowledgement, to the enquiring expression of the leader on the sleeve fix it in our minds as that complete entity: a classic album. Coltrane’s actions, however, suggested the music was a beginning, not an end. In the studio he experimented: trying a version of Pursuance with Archie Shepp and bassist Art Davis expanding the band.

That version didn’t make it, but in his sleevenotes Coltrane said he hoped he “would be able to further the work that was started here”. There were no repeated performances of the music or A Love Supreme theatre residencies where the band doubled down to maximise sales. Instead, Coltrane was led much more by his own intuition, what he felt was right for the audience.

Indeed, on his second night in Antibes, Coltrane responded to the mood and played a set more rooted in crowd-pleasing tunes, reverting to My Favourite Things and Impressions. For a long time, the first night Antibes set was thought to be the only live recording of A Love Supreme. It now transpires that a couple of months later, September 30, 1965 – in the same session as the recording of the posthumous 1971 release Live In Seattle – Coltrane played A Love Supreme again.

The performance, convened at the Seattle Penthouse club in front of a small audience for Jim Wilke’s regular Thursday-night jazz show on local radio, sounds more like music from the later part of the 1960s: performed by musicians in dashikis, not suits. The band is expanded (the quartet are joined by bassist/flautist Donald Garrett, and by saxophonist Pharoah Sanders), but then so is the music, as if additional windows have been fitted to an already spacious and serene building. Four interludes, mainly featuring duelling basses plus occasional prayer bell, provide additional vantage on the spiritual view.

Elvin Jones supplies a classic and resourceful swing throughout, but a newer sense of carpet-level informality pervades the music. Percussion is rattled through the 20-minute Acknowledgement. McCoy Tyner’s chords float into view. Coltrane’s playing responds to the mood with relatively beatific contributions, allowing Pharoah Sanders room to speak in more forceful tongues. Come the 15-minute treatment of Pursuance, Tyner’s solo clarifies the similarities and differences. This is still music with a lot of virtuosity, and a great many notes, but it and its players are living its adaptability, as the evidence reveals all we have previously believed this composition to be, a confluence of free improvisation and what later became “spiritual jazz”. At the very end of the end of the session, a snippet of conversation can be heard. “I think that’s it…” “…It’d better be.”

Perhaps inevitably, though, it wasn’t the end of Coltrane’s quest, even for this week. The day after this show, he took his players from the previous night (adding Joe Brazil, who had taped the show) to the studio of Seattle C&W drummer Jan “Kurtis” Skugstad. They recorded a session released after Coltrane’s death, the album Om, featuring a chant from the Bhagavad Gita.