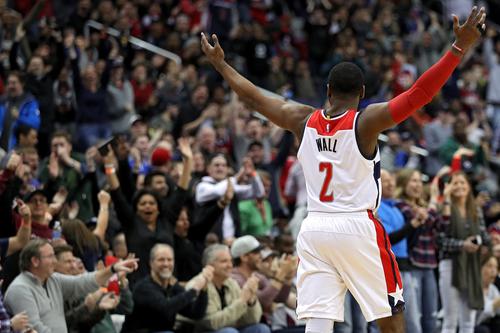 After testing the shoe deal free agent waters for the past couple years, John Wall has finally set up shop with a familiar name.

According to Shams Charania from Yahoo Sports, Wall has inked a new five-year endorsement deal with Adidas, a company that he has some history with. In fact, Wall had a former endorsement deal in place with the athletic wear and sneaker giant, but decided not to renew his old deal when it expired in 2015.

Wall had been a shoe free agent for the past two years, weighing the different options as they were presented to him. He has been one the NBA’s best point guards for some time now, but unlike some his contemporaries, like Kyrie Iriving or Russell Westbrook, he doesn’t have a signature shoe to call his own in the marketplace. This new deal with Adidas will surely change that, as the brand looks to add yet another strong personality to its roster athlete endorsers. Check out the full tweet from Charania below.

As per CBS Sports, Wall signed a five-year, $25 million endorsement deal with Reebok when he entered the league after being the No. 1 overall draft pick by the Wizards back in 2010. However, severe injuries coupled with a major flaw in his signature shoe that was made from that deal, they ultimately decided to part ways. One thing is for sure: his new deal with Adidas, while not disclosed in detail to the public just yet, should net the star point guard an immense bounty in terms pay.

Would you buy a John Wall signature shoe? Let us know in the comments.