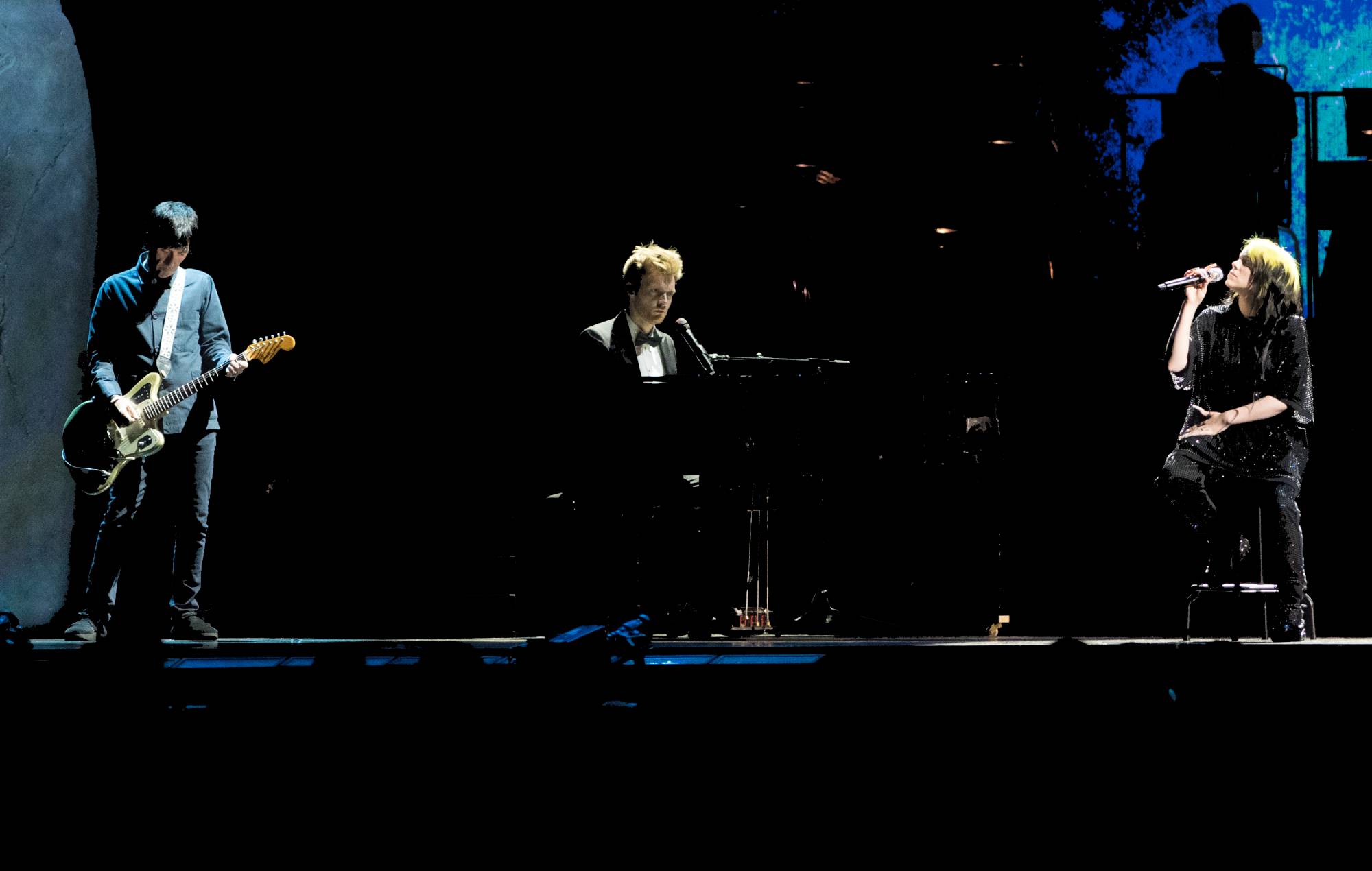 Johnny Marr on penning the ‘No Time To Die’ score: “I’m making a lot of nasty, nasty noises”

Johnny Marr has spoken to NME about his work writing the score for the new James Bond film No Time To Die, as well as the experience of recording the movie’s theme song with Billie Eilish and Finneas.

The former Smiths guitarist wrote the score for the 25th big screen outing for 007 with his longtime collaborator and soundtrack legend Hans Zimmer. Speaking to NME ahead of his recent London show at the Electric Ballroom in Camden, Marr described the movie as the most “human” Bond film yet.

“I’m wondering if that’s because this is Daniel Craig’s last [Bond] movie,” said Marr. “He’s very invested and has a lot of say in this film. From what I gather, he’s probably feeling incredibly validated. He has become definitive in this era of Bond to a couple of generations.”

Of his own role in the soundtrack, Marr revealed: “I’m making a lot of nasty, nasty noises on it. I’ve had this thing with the last few films that I’ve worked on where I am determined to create an atmosphere with the sonics of the guitar that can’t be done by the most amazing synthesizer players in the world – nor the most amazing sound designers.”

He continued: “There are always people around Hans who are doing the most amazing things with cutting-edge technology, and I’m always so happy when my idea is the one that gets across the line. I just stand my ground in these meetings and say, ‘I can do that, I can make the most spooked-out, horrible, creepy, disturbing noise’ to these people that have been doing it for 25 years, and it becomes a point of pride that I’m doing it on the guitar.

“I’ve even done it on a few movies that people don’t even know I’m on. It’s all about the wires and electricity – you just can’t design it.”

Marr and Zimmer also worked on the theme song for No Time To Die with Billie Eilish and her brother/producer Finneas (who appears on the cover of NME this week). Asked by NME if they might collaborate together again, Marr said that he “could see it happening” and went on to praise the sibling duo’s professionalism and musicianship.

“I knew Billie’s stuff quite well because we’d been listening to it on the tour bus and had done a couple of festivals with them,” said Marr. “The thing about working with Finneas and Billie was that I knew before I’d even heard the song that the strength of it was going to be in the intensity of the song.

“As you can imagine, there are versions of it that are just super-bombastic and that classic Bond thing. It was really smart of everyone involved that it was definitely a case of less is more. They know what they’re doing. They know that the power is in the intensity of the performance.”

He continued: “They’re so classy and know that if you want to do a Bond theme, it’s about doing something that’s your sound. I wanted to protect that, and in the end we just kept coming back to ‘reduce, reduce, reduce’. I think it’s a really powerful piece of music, considering it’s such a mainstream project.”

Praising the O’Connells as “a natural musical family,” Marr went on to hail Finneas as “a very modern man” and Billie as “an astonishingly good singer”.

“From a technical point of view, [Finneas’] process is so modern that he can make these amazing records on a laptop,” he said. “It’s quite easy for anyone to look back on ‘the golden age of pop’ and look to the past and see the modern age as being diminished, but the proof of it is in what you’re hearing.

“I’ve been asked about working with a pop star and young people, but my experience of working with Billie and Finneas is just that they are musicians. The way that they conduct themselves and their processes are the same as other serious musicians – as it was when I worked with Pharrell or Herbie Hancock or Hans Zimmer or David Byrne. Billie and Finneas are no different – they’re just the modern version. It’s the process that makes them modern. There’s no naivety there.

“Let’s put it this way, they would have been able to hold their own in any era.”

On whether or not he’d been attracting a new, younger audience as a result of their collaboration, Marr replied: “A little bit. It started to happen a little bit on the last tour, but now we get messages from 14 and 15-year-olds. That’s an age where if you’re going to be a guitar player, you’re going to either get serious about it or you’re going to give up.

“There are quite a lot of boys and girls who are getting serious about the guitar and starting to hear about me at 15 – and some of that is to do with Billie. In America I imagine it is, but mostly it’s about the guitar.”

Asked about the future of the 007 film franchise, Marr said that he and Zimmer hadn’t yet been asked to return to score the next film, but did reveal: “I want Jodie Comer to play the next Bond. She would definitely be able to do it.”

Marr did, however, reveal that were other big screen projects in the works and offers on the table.

“I’m working on something with a huge star in it and it’s part of a huge franchise,” he added. “It’s one of the big things I’m yet to do, I’m just waiting for the big boss to tell me when I can talk about it. I did sneakily do the theme to Top Gun, but that’s a secret.”

Marr added: “There was some talk about Cosey Fanni Tutti’s book [Art Sex Music] being made into a film. I don’t know if I’m talking out of turn, but someone contacted me about that.”

Check back with NME for more of our interview with Johnny Marr soon. He also shared his thoughts on the Blossoms and Rick Astley covers band row, telling NME that he had “dealt with it”.

Having been debuting new material on a run of intimate UK shows, Marr recently shared new single ‘Spirit, Power And Soul’. He’ll release his new four-track EP, ‘Fever Dreams Pt 1’, on October 15 via BMG, before a double album follows in 2022.

No Time To Die is in cinemas now.