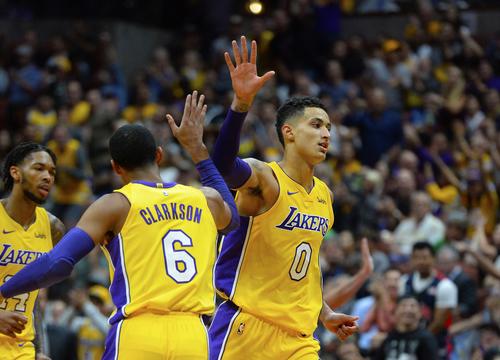 This weekend, Lil B took to social media to make public the blessing he’s sent down on several NBA teams. Among thsoe on the list were his Golden State Warriors, the Portland Trailblazers, and Boston Celtics to name a few.

In that same series tweets, the Based God would go on to note two entities, in particular, who warranted a curse for their past transgressions when he named the entire Denver Nuggets squad and the Los Angeles Lakers’ Kyle Kuzma.

Soon after, Kuzma’s teammate Jordan Clarkson would reply to Lil B’s curse with a simple message, reading, “lol c’mon bro spare my kuz haha.” Lil B would respond with a “Got you.” Crisis averted.

Kyle Kuzma first caught Lil B’s attention when he tweeted out that Lil B was the “worst rapper ever.” While the tweet was since deleted, there’s clearly no escaping the Based God. Lil B has previously issued a warning to another Laker player in the form Lonzo Ball after the Bay Area rapper took issue with Ball’s comments on Nas.

In another positive message, Lil B also granted a full blessing restoration to Gordon Hayward, assuring us all that the Celtics forward would be ready to get back n the court in no time after suffering a season-ending ankle injury back in October.

“HE WILL BE BACK SOON STRONGER AND MORE POSITIVE THEN sic] EVER GO BOSTON!