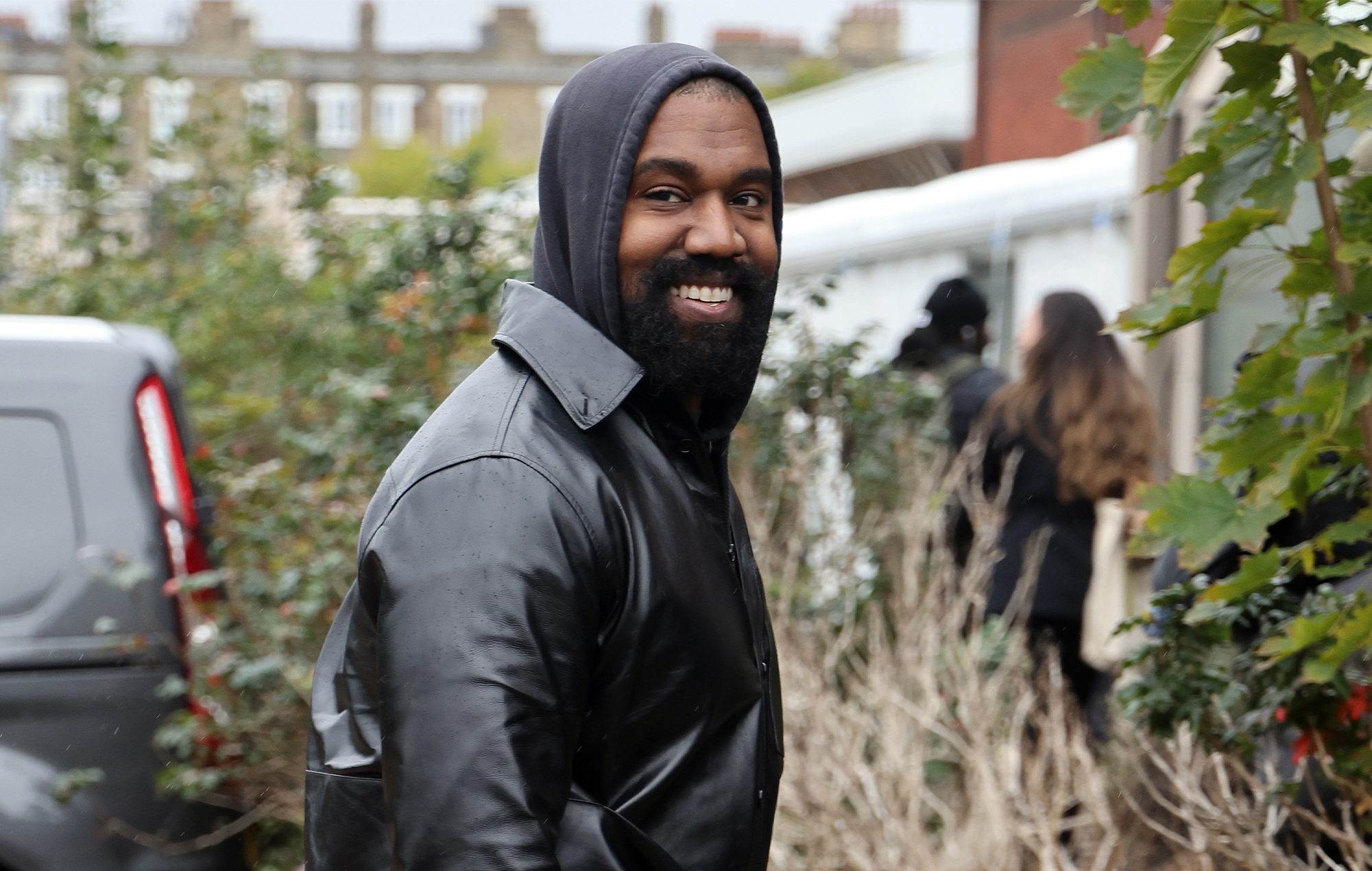 Kanye West has stirred controversy over the past few days by sharing anti-Semitic sentiments on Twitter and Instagram.

In response, the rapper has been condemned by many figures in the entertainment world, as well as several political figures and organisations that represent Jewish communities.

Yesterday (October 9), Twitter locked the rapper’s account after he tweeted: “I’m a bit sleepy tonight but when I wake up I’m going death con 3 [sic] On JEWISH PEOPLE. The funny thing is I actually can’t be Anti Semitic because black people are actually Jew also. You guys have toyed with me and tried to black ball anyone whoever opposes your agenda.”

In a follow-up tweet – which is still available to view at the time of writing – West posted: “Who you think created cancel culture?” A spokesperson for Twitter confirmed that West had been banned from the platform “due to a violation of Twitter’s policies”.

It followed his booting from Instagram on Friday (October 7), when a representative for Meta – the company that owns the platform – said West was restricted from posting, and had content removed by a moderator, after violating community guidelines; it was not specified exactly what posts were removed, but one reportedly saw West share an anti-Semitic comment in the form of a threat.

The post in question came after Sean ‘Diddy’ Combs responded to West’s recent gaffe at this year’s Paris Fashion Week – where he wore a shirt emblazoned with the phrase “White Lives Matter”, a slogan tied to white supremacist movements – and West shared screenshots of a text exchange between the two rappers to Instagram.

In one of those texts, West wrote to Diddy: “I’ma use you as an example to show the Jewish people that told you to call me that no one can threaten or influence me.”

Several key figures in the entertainment industry have now shared their disapproval of West’s anti-Semitic comments. Among them is Jewish actress and comedian Sarah Silverman, who tweeted: “Kanye threatened the Jews yesterday on twitter and it’s not even trending. Why do mostly only Jews speak up against Jewish hate? The silence is so loud.”

Kanye threatened the Jews yesterday on twitter and it’s not even trending. Why do mostly only Jews speak up against Jewish hate? The silence is so loud

Jamie Lee Curtis pointed out that Yom Kippur – the holiest day of the year in traditional Judaism – was celebrated last week (from sunset on Tuesday October 4 to nightfall on Wednesday October 5), noting that “a threat to Jewish people ended once in a genocide”. Pleading with the rapper, she continued: “Your words hurt and incite violence. You are a father. Please stop.”

The holiest day in Judaism was last week. Words matter. A threat to Jewish people ended once in a genocide. Your words hurt and incite violence. You are a father. Please stop. pic.twitter.com/8iFuKwwspw

Diane Warren also spoke out, writing: “Using the word[s] death and Jews in the same sentence when 6,000,000 Jews were murdered, [two] out of [three] European Jews, is vile, abhorrent and irresponsible [and you should] be banned for life everywhere.”

Also a little reminder Kanye, using the word death and Jews in the same sentence when 6,000,000 Jews were murdered,2 out of 3 European Jews, is vile abhorrent and irresponsible+ U shoukd be banned for life everywhere

Fuck Kanye. That’s it. Carry on.

A handful of political figures – mostly those representing left-wing ideologies – have also weighed in to criticise West. In a tweet of her own, New York congresswoman Alexandria Ocasio-Cortez wrote: “There is absolutely no room in this country or world for antisemitism.

“It is important to see how harmful [and] dangerous Kanye’s words are – not only to our Jewish brothers, sisters, [and] siblings, but also to our collective society at large. We must reject this [trash] wherever we see it.”

There is absolutely no room in this country or world for antisemitism. It is important to see how harmful + dangerous Kanye’s words are – not only to our Jewish brothers, sisters, & siblings, but also to our collective society at large.

We must reject this 🚮 wherever we see it.

In a statement shared overnight, the Black Jewish Entertainment Alliance called the rapper’s posts “hurtful, offensive, and wrong”, noting that such comments “perpetuate stereotypes that have been the basis for discrimination and violence against Jews for thousands of years”.

Their statement continued: “Words like this tear at the fabric of the Black-Jewish relationship. The Black and Jewish communities must stand together through incidents like this to make clear that trafficking in hateful stereotypes is unacceptable – and that the words of one entertainer do not reflect the views of an entire community.”

Ye’s recent statements about the Jewish community are hurtful, offensive, and wrong. They perpetuate stereotypes that have been the basis for discrimination and violence against Jews for thousands of years. Words like this tear at the fabric of the Black-Jewish relationship. pic.twitter.com/1H5R0iEDJ0

West was also condemned by the Anti-Defamation League, who found his recent movements to be “deeply troubling, dangerous, and antisemitic, period”. Their statement continued: “There is no excuse for his propagating of white supremacist slogans and classic [anti-Semitism] about Jewish power, especially with the platform he has.

“Power. Disloyalty. Greed. Deicide. Blood. Denial. Anti-Zionism. All of these are antisemitic tropes that we break down in our [‘Antisemitism Uncovered’ guide]. Many of these myths have influenced [West’s] comments recently, and it’s dangerous.”

Power. Disloyalty. Greed. Deicide. Blood. Denial. Anti-Zionism. All of these are antisemitic tropes that we break down in our #AntisemitismUncovered Guide at https://t.co/1D3LOM8xXQ. Many of these myths have influenced @KanyeWest's comments recently, and it's dangerous. https://t.co/fKQLPFkDR2

Another organisation speaking out against West is the Creative Community For Peace, who wrote that “in the past week, Ye has spread some of the most vile and age-old stereotypes about Jews to his hundreds of millions of followers”.

They continued: “There should be no place for this kind of hate in our public discourse. We support every entertainer’s right to free speech, but no one has a free pass to target and demonize a minority group with such malice. We are gravely concerned about the impact of Ye’s statements – and how they will affect his fans, particularly young people.

“At the same time, we hope this can be a moment that ultimately creates better awareness about the dangers of antisemitism for [West], his fans, and other entertainers. We remain open to dialogue with him about how harmful and fallacious his comments are.

In the past week, Ye has spread some of the most vile and age-old stereotypes about Jews to his hundreds of millions of followers. There should be no place for this kind of hate in our public discourse. pic.twitter.com/6tC9H5NsPT

does mental illness generally lead people to threaten violence against women and jews? no

i’m sorry for what he’s going through, but it’s not an excuse for his behavior — and to pretend otherwise is an insult to anyone with mental illness

Kanye West is a mentally ill anti-semite. Tommy Tuberville is a racist. Herschel Walker is a moronic liar. Donald Trump is a Fascist Criminal. Welcome to today’s Republican Party.

Kanye West has more than 3 million followers. He threatened to go "death con 3" on Jewish people. I don't hear his GOP supporters coming out to condemn this. Instead, Jewish people are being told to get over it because he isn't serious.

I'm a Jew. I hear I can replace people. I'd like to replace Tucker Carlson, Jim Jordan and Kanye for starters. Who do I call?

Last week everyone came for Kanye’s throat when he criticized Gabriella Karefa-Johnson, as they should have, but now he’s threatening an entire religious/ethnic group and those same people are dead silent??? Right on https://t.co/yzTTkOIP6j

Stop telling Jewish people to get over what Kanye said and that he’s mentally ill and not serious. Stop telling Black people his t-shirt was a joke. Antisemitism is real. Anti-Blackness is real. Words matter. Words are what start unwarranted hate towards people.

If you are defending or trying to rationalize in any way Kanye West anti-Semitic comments you can F right off and stop following me immediately.

Between SNL's trash take on the Try Guys and Kanye's blatant antisemitism, yesterday was a nutso day to be online

Kanye, an artist who I used to love, is an anti-Semitic conservative piece of shit who desperately needs mental health treatment. But his typo Death Con 3 is a great name for a 90s Image comic.

Despite a huge backlash to the moment, West later doubled down on his views, writing on his Instagram Stories that the Black Lives Matter movement “was a scam”, adding: “Now it’s over…you’re welcome”. He later issued another defiant response insisting: “They do”.

Artists such as Jaden Smith and Boosie responded to West’s controversial attire while the family of Ahmaud Arbery – a 25-year-old Black man who was murdered by three white neighbours in the United States in 2020 in a racially motivated hate crime – said Kanye West’s “White Lives Matter” shirt helped “legitimise extremist behaviour”.

NME has reached out to representatives of West for comment.