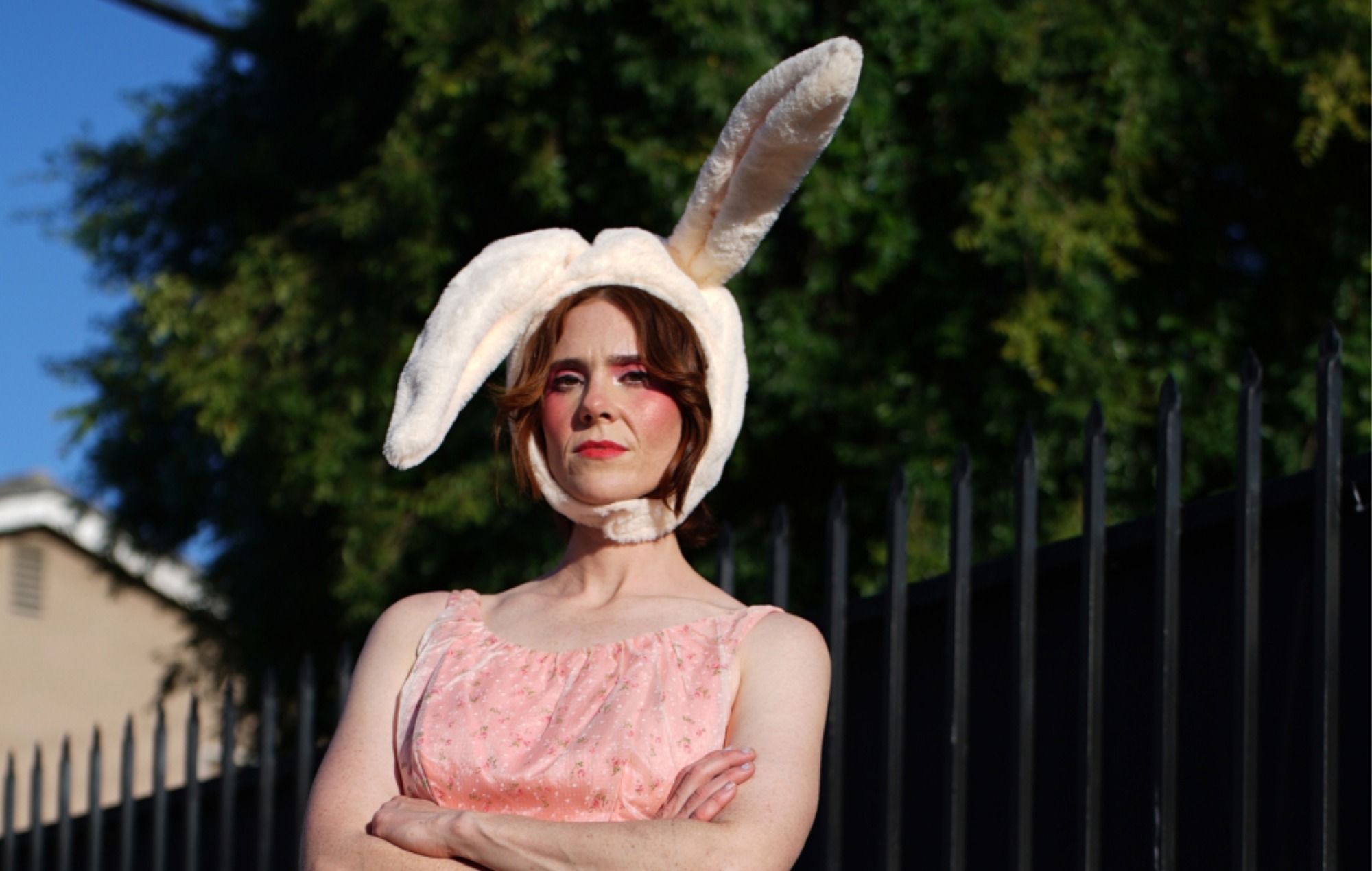 Kate Nash has spoken to NME about new single ‘Misery’, as well as the future of hit show GLOW and how mental health shaped her new material. Watch our video interview with Nash above.

Her first new material in 18 months, the bittersweet new single ‘Misery‘ comes as the first taster of the singer-songwriter and actor’s forthcoming collection of work coming later this year – the follow-up to 2018 album ‘Yesterday Was Forever‘. “It’s the least stressed I’ve felt putting out music,” Nash told NME, “because I think we all really know what real stress is now.”

The new single addresses the mental toll of the last year in lockdown, and finds Nash reckoning with feelings of depression and “the trauma of everything changing”.

“Last year I was really depressed and sort of useless,” Nash explained. “And then I had to kind of find my way and figure out how I could be a musician in this pandemic.”

Asked whether it felt like now was a better time to release ‘Misery’ as the pandemic promises an ending in sight, Nash said: “To be honest, I still go in and out of bouts of depression. There’s light at the end of the tunnel but I think we’re all a bit scared it’s all going to go wrong again.”

The conflicted energy of ‘Misery’ is set to define all of Nash’s new material, the artist said of the music she’s been working on over the last year. “I really leaned into the lacklustre, lethargic depression stuff,” she said. “I’m an over-thinker, so when lockdown happened I was like ‘Am I depressed? Am I a real artist?’ But I think it’s a common thing with artists and musicians, constantly searching for purpose.”

Nash also said he feeling was reminiscent of when her former manager Gary Marella stole large sums of money from her, as addressed in her 2019 documentary Underestimate The Girl. “Back then I felt a bit washed up, and last year I had to confront that again,” she told  NME. “It’s never a bad thing to be able to come back to yourself and not need other things to make you who you are. Almost feeling like I couldn’t do what I did anymore made me so grateful to do it.”

One of the things Nash most enjoyed doing from 2017 to 2019 was starring as Rhonda “Britannica” Richardson on Netflix comedy-drama series GLOW, about a fictional women’s wrestling club in the 1980s. Nash acted alongside Alison Brie, Betty Gilpin, Marc Maron, Chris Lowell and more in the show’s three seasons to date. Although season four had started shooting in 2020, Netflix abruptly pulled the plug on the series last October.

“It was devastating,” Nash remembered of finding out about the show’s cancellation. “I felt a bit numb at the time because it was hard to give yourself the feelings because everyone was going through so much.”

The cast and crew were reportedly only informed of the cancellation a day before the rest of the world found out the news. “I was told it wasn’t going to go public until a certain date and then it was an hour after.” Nash told NME. “It’s like when you break up with someone and you have an agreement about how you’re going to handle it and they just post that they’re single and change their Facebook status update.”

She added of the fourth season’s progress: “We had scripts, we had started shooting, we were shooting episode two. I was so excited for season four and I’m so heartbroken like a lot of people. You have to let yourself feel the feelings and try to move on.”

Nash described GLOW as “one of the most exquisite experiences of my life,” adding: “That show meant so much to so many of us. To be in a show which was such a collaboration of freakish women, of misfits trying to make it happen, I just love that story. Working with those women saved me. My confidence was in the gutter after everything I’d been through with music and it was reinstalled in a wrestling ring, I can never replace that.”

Are there any early conversations among cast and crew members about a spin-off movie to tie up loose ends?

“I can’t tell you anything hopeful,” Nash replied, before addressing the fact that with the likes of Frasier returning for a reboot on Paramount and the Friends reunion recently released, there might be something to look forward to in future.

“It’s never completely the end these days,” Nash said. “I feel like when we’re in our 50s and 60s there will be a GLOW movie. They’ll be like, ‘Put your leotards on, ladies’ and we’ll be slammed and broken in the ring again, apart from Alison Brie who will still be perfect and incredible like a machine.”

Next up, Kate Nash’s plans for the foreseeable future will involve a “a COVID-secure road trip” across the US for a string of shows called the ‘Safely Out of the Bedroom Tour’, giving Nash a way to “reinvent again”.

The artist explained how the idea for a different kind of tour stemmed from the sense of community found among her followers on Patreon, and the camping trips she went on with her boyfriend during lockdown. “I thought maybe I can combine these two things because live-streaming from my bedroom and living room is charming but very dull, and part of putting on a show is having people experience some kind of escapism,” she explained. “And then there’s the hijinks of travel and things going wrong – everyone’s involved. It’s too easy staying in your living room, and it’s rubbish.”

Nash will be setting out on the road in California, where she now lives, with the first gig taking place at Sequoia National Forest. “The wilderness is on my doorstep, national parks and forests, so I thought, what if that is my backdrop? I can take people on the road through Patreon and make this mini-documentary series,” she said.

Watch our full video with Kate Nash above, where the artist also shares her thoughts on ‘landfill indie’, her 12-year-old pet rabbit Fluffy, and how seeing Elton John at the Staples Center in Los Angeles reminded her why she loves playing live music

‘Misery’ by Kate Nash is out now.