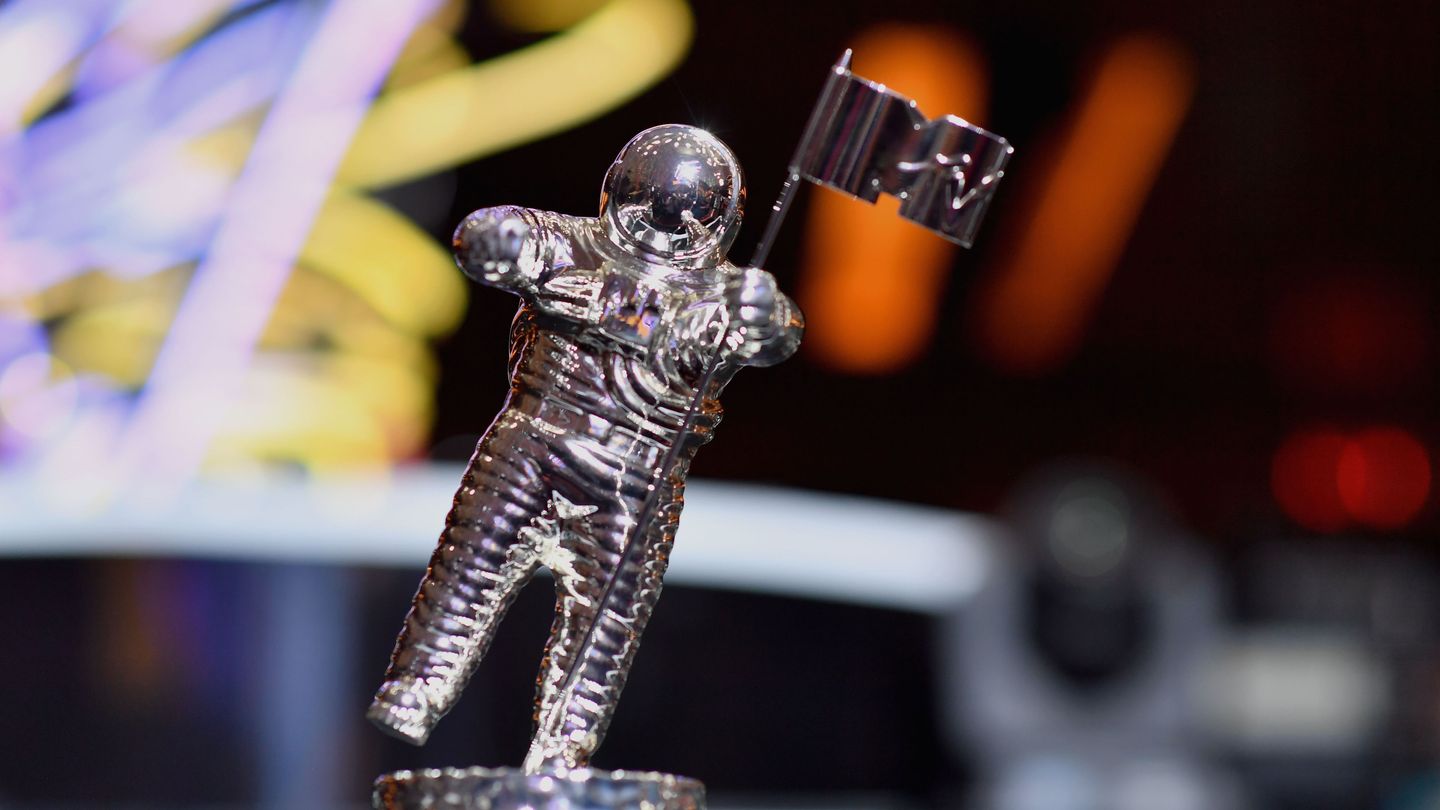 Before MTV developed the novel reality show formats that have come to dominate television, even before it became the first network to play music videos around the clock, it first broadcast footage and photographs cut from NASA’s Apollo 11 expedition, the spaceflight that landed humans on the moon in 1969. The flag the astronauts placed into the craterous surface appeared without its stars and stripes, instead taking on the brand’s neon logo, as a voiceover echoed a new mission. “Ladies and gentleman, rock and roll.”

That was August 1, 1981, and as MTV became ingrained within pop culture in the decades that followed, so did the Moonperson. An iconic symbol of the brand’s pioneering spirit, it has appeared on every VMA trophy since the launch of the award ceremony in 1984, and will again at this year’s ceremony in September. On Sunday, MTV celebrated that history, unveiling a Moonperson trophy reimagined by the artist Kehinde Wiley, along with a life-sized replica inspired by it at NASA’s Kennedy Space Center Visitor Complex in Cape Canaveral, Florida.

The special edition Moonperson is a sculpture featuring an iridescent facade draped with luscious green vines and brilliant pink florals. In other words, it is quintessentially Wiley, who is known for his naturalistic portraiture that typically places Black subjects in contemporary attire against intricately patterned backdrops referencing art-historical settings. He became the first Black American to paint an official portrait of a United States president when he rendered Barack Obama. That work is in the collection of the Smithsonian’s National Portrait Gallery in Washington, D.C.

“Kehinde Wiley’s Moon Person sculpture represents inclusivity and diversity marked by the historical, environmental and nature relevance of the botanicals,” MTV said in a statement to Rolling Stone.

“The design features botanical vines seamlessly flowing up and around the figure’s legs, body, and arms as a commentary on the ethnic histories that surround America. Each intertwined vine or leaf has a different historical relevance, such as the seeds from African slaves, that are woven into the American tapestry. The sculpture complements Wiley’s forthcoming series of portraits, in which he plans to create paintings featuring his subjects lying on their sides as vines encircle their bodies.”

This isn’t the first time MTV has tapped a visual artist to lend their singular vision to the symbol. In 2013, the Brooklyn-based multimedia artist KAWS created an imaginative version with a shimmering gun-metal finish and a comical skull for a face. At that year’s VMA ceremony, the stage featured a 60-foot-tall inflatable replica of the artist’s sculpture, which presided over the celebrity performances and award announcements. This was followed by another update by fashion designer Jeremy Scott in 2015.

The life-sized statue inspired by Kehinde Wiley’s Moonperson statue will be on view to the public at the Kennedy Space Center’s Visitor Complex.