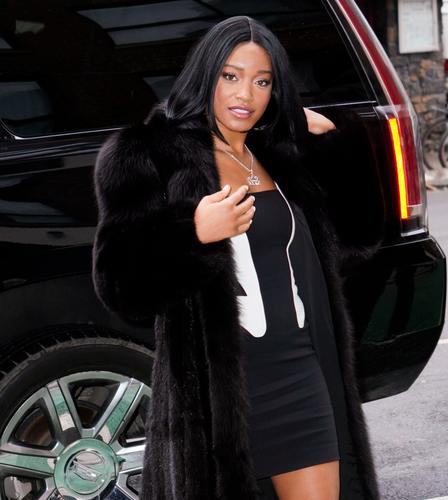 Keke Palmer is known to many as a famous child star who dominated her roles in Akeelah and the Bee, True Jackson, VP and The Longshots. The 24-year-old has grown into a strong young woman who has not only taken on more mature roles in the acting game – such as Pimp, Scream Queens and Scream – but Keke has also ficially made major moves in the music lane. She’s no rookie to the industry, as she told us she got her first record deal when she was just 12. This time around she’s started her own label, Big Boss Entertainment, and is looking to inspire others who sign on to create music from a “genuine place.”

Keke has released  bangin’ singles in the past such as “Pregame,” “Hands Free,” and the Quavo assisted “Wind Up” to name a few. Her latest beat, “Bossy” – helmed together with Tasha Catour and her writing team – is all about doing her own thing, owning her decisions and looking to help others do the same. Keke’s set to release her third studio album The Boss this year and in anticipation, we hopped on a call  to talk about her reasoning behind starting her own label, balancing music and acting, pursuing music in a male-dominated industry and more.

HNHH: “Bossy” is a celebratory anthem you owning your independence in the music game. I imagine this isn’t an easy task wanting to run solo rather than be with a label, can you tell me about your decision to start your own label Big Boss Entertainment?

Keke: Definitely, for me, I’ve had a very hard time in the label system since I was very young. I got my first record deal when I was 12 and for me it just always was, just a very kind like unfulfilling and kind like – it really just made me feel insecure and not nurturing for artists. It was very hard for me to feel confident and feel like I was given the proper development. For a long time I let it push and pull me when it came to music and this time around, I say ‘why can’t I do my own thing?’ Why can’t I create a situation for other young people like me to feel like they have the opportunity to actually have a different experience when it comes to labels and the music industry and getting the proper development that they need.

What can an artist look forward to when signing with Big Boss Entertainment?

Definitely true artist development and what I mean by that is, when I’m thinking about the old way with how labels work – where I’m looking at Motown Records or Uptown Records the ones that took their time developing artists and creating an atmosphere that help the artist have an individuality. It was also about the writing themes, the producers the choreographers, there was a sense family and everybody had their own part and was respected. I think for me that’s something I’m also very excited about, to have the opportunity to nurture young writers and producers, and for them] to feel like they have a home and they’re respected.

The music industry is very male-dominated, how do you feel as a woman starting her own label and trying to make a name for herself as an hip hop artist?

I’m not really thinking about it as dominating the hip hop scene, it’s just about being a great artist and being true and authentic and allowing myself to grow. Of course, I have a real love for R&B and hip hop but I think at the end the day all music crosses genres. You can look at someone like Nicki Minaj and somebody might call her pop and somebody else might call her hip hop. You could look at somebody like Jay Z and somebody might say he’s hip hop but if you look at his music it crosses every platform there is. For me, it’s just about creating great music that represents who you are as a person and being great at that.

In a past interview, you shared some advice Ice Cube once gave you for navigating the industry. What advice would you give to someone currently?

Take your time and be patient with yourself and realize that you’re creating your own blueprint. There’s going to be brick walls and there’s going to be things that you’re not sure about and things] that you have questions about and allow yourself to answer them. Have somebody to bounce your ideas f who’s] also there for you to help you kind flesh out your vision. Make sure it’s starting from a real place. For me, my goal is to make a space freedom for young people including myself, to allow us to be excited about something and be able to look at something and say “I wanna be apart that.” Whatever you want your vision] to be about, make sure it comes from the purest place your heart and a very genuine place, and go from there.

With pursuing and succeeding in both acting and music, do you find it hard to balance both?

In terms touring and travelling with music and stuff it can be difficult just because, you know, with film and television you need to be in one spot you can’t really be everywhere. That’s probably the most difficult thing that I’ve found with doing both. Over the years I’ve been able to kind manage it but I remember when I did my first tour when I was 13, that was extremely taxing for me because I would be filming The Longshots on the weekend I would be flying to different cities to perform. That was pretty heavy, also because my age and stuff like that. I just wasn’t in that headspace. That was probably the most difficult thing I had to do with merging two worlds together.

Anything coming out soon for us to look forward to?

I definitely have the album that’s coming out, called The Boss. “Bossy” is going to be premiering on Star, the show on Fox and I’ve been workin on that so, it’s going to be premiering on the season launch coming up in March. Aside from music, in March I also have Scream coming out which I did for MTV. Super, super excited about that. Music, music, music you know launching myself but also trying to see what’s out there and adding other people to Big Boss.