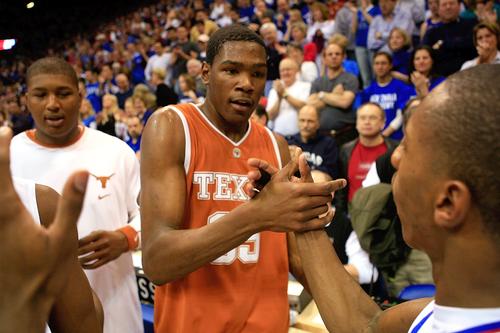 Kevin Durant Makes Massive Donation To The University Of Texas

The University Texas has announced that Kevin Durant has pledged a $3 million donation, which is the largest donation in school history from a former basketball student-athlete and amongst the largest ever from a pressional athlete to his or her former school, according to a press release from the school.

As a nod to KD, Texas will name the main entrance to Denton A. Cooley Pavilion the “Kevin Durant Texas Basketball Center.” According to the press release $2.5 million Durant’s gift will go to Texas Basketball.

“My time as a Longhorn helped build the foundation for who I am today as a player and a person, and the UT team will always be my family,” Durant said. “It’s important to me to continue to give back to The University and ensure that future student-athletes have all the opportunities they need to succeed. It’s an honor to have such a close and unique relationship with Texas Basketball, and I’m grateful to be able to contribute.”

“Kevin Durant has an incredibly strong and personal connection with not only our basketball program, but The University Texas as a whole. Each time I’ve had the opportunity to visit with Kevin, I’ve been impressed with his genuine appreciation for his time, growth and development at Texas,” Texas Men’s Basketball head coach Shaka Smart said. “This gift means a great deal to our entire University, but it’s more a reflection how meaningful the relationships that Kevin built while at Texas remain true to this day.”

During his lone season with the Longhorns, Durant won the Naismith and Wooden awards as well as the Rupp Trophy. He averaged 25.8 points, 11.1 rebounds and 1.9 blocks per game in the 2006-07 season before declaring for the NBA draft, where he was selected No. 2 overall by the Seattle Supersonics.