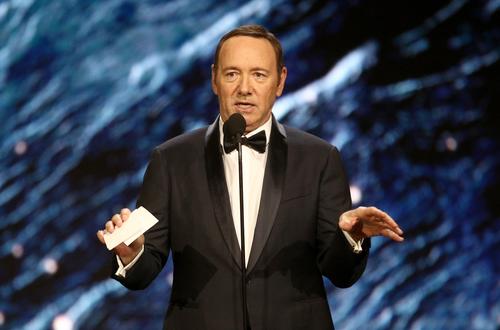 As if things couldn’t get any worse for Kevin Spacey, new reports allege that the former House Cards actor used some racist slang while on set the show. According to The New York Daily News, the security company who worked on the set the hit Netflix production may have just uncovered security footage from 2012 that shows Spacey engaging in some racist behaviour.

Earl Blue, who is the head VIP Protective Services, reveals that Spacey once approached his security manager and told him that he didn’t want “n*****s watching my trailer,” after recognizing the predominantly black staff members working on set. Furthermore, Spacey reportedly never acknowledged these staff members, refusing to shake their hands or look in their direction while filming the first season.

When Blue went to report Spacey’s behaviour to the executives working on the series, they retorted with “that’s just the way he is,” and “we’ve got to keep him happy.”

Despite earning positive feedback for their services, VIP Protective Services were not rehired to work on the series next season, which Blue believes Spacey may have been the reason why the company was never asked to return to the set and renew their $1.1 million contract.

Since the news broke Spacey’s sexual abuse towards a minor, the actor was fired from House Cards, while also famously replaced by Christopher Plummer at the last second in Ridley Scott’s All the Money in the World.