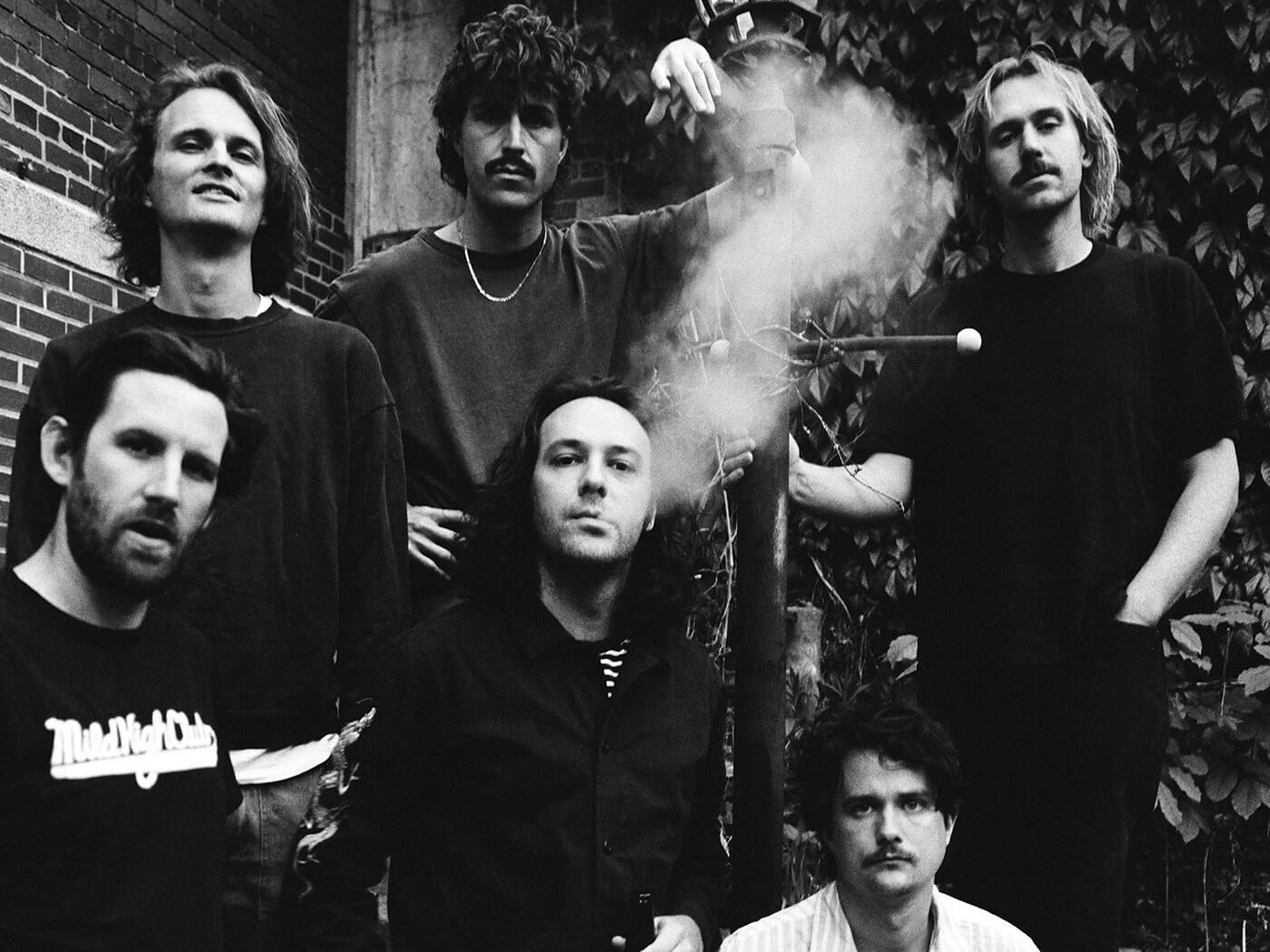 In a challenge to name the undisputed overlords of modern psych rock, two heavyweight contenders spring to mind – Osees and King Gizzard & The Lizard Wizard. Both bands have a lot in common: their resistance to said definition, for starters, along with their omnivorous musical appetites and protean vision. They also share a ferocious work ethic, releasing an avalanche of records in what seems like an urgent and endless artistic venting.

It’s hard not to boggle at King Gizzard’s stats. This month the Melbourne sextet release three albums of new material, bringing 2022’s tally to five. So far. Since their 2012 debut, they’ve averaged 2.3 albums per year, going into overdrive (again with five) in 2017. It’s the kind of rate that seems diarrhoeic, a likely sign of bloated creativity and reluctant self-editing, but KG have been scratching their expressive itch in increasingly inventive ways since 2012’s 12 Bar Bruise. As introductions go, it’s fun if hardly original – a rough-necked mix of ramalama punk, bluesy garage rock, surf rock and US alt.rock that’s light years away from where they are now.

The following year’s Float Along – Fill Your Lungs saw their first dabblings in psychedelia, but they swiftly moved on to stretch that descriptor by embracing kosmische (via Neu!, an ever present guide), sci-fi metal, Afro-funk, thrash, prog, ’70s heavy rock and jazz, also guided by their curiosity down side roads of Tropicalia, Turkish psych folk and Ghanaian highlife. For all the genre switching, though, there are constants: KG’s grip on melody is steadfast and assured, while their vividly poetic lyrics (often a group effort) address serious subjects – environmental crises, concerns about humanity’s survival and the power of technology. Body horror has a place, too. All of which has shaped a unique world thick with metatextual references and symbology – whether fan-interpreted or intended, it’s hard to say – dubbed “the Gizzverse”.

Their latest splurge isn’t a trilogy in the conceptual sense, but each album has been shaped by a structural puzzle of the band’s own devising. It’s something they’ve done before: Quarters! is made up of four sections, each 10 minutes and 10 seconds long; Nonagon Infinity plays as an endless loop; and on Flying Microtonal Banana all instruments use quarter-tone tuning. These are games of skill that sharpen KG’s inventive edge.

First off the blocks is Ice, Death, Planets…, in which all seven modes of the major scale are represented, the initial letters of the words in the title acting as a mnemonic for those modes. The tracks were built from the ground up in the studio over seven days
(numerology geek alert) of jamming, with members playing for 45 minutes and then switching instruments to go again. Jams that passed muster were then edited into songs by guitarist/producer Stu Mackenzie and overdubbed with flute, organ and extra guitar. The result is a glorious, dizzy riot with no direct precursor, though the fun KG had recording “The Dripping Tap”, the 18-minute motorik jam that opens this April’s Omnium Gatherum, was the spur. It carouses from the sweetly meandering pop of “Mycelium”, with its top notes of Vampire Weekend, and “Magma”’s lysergically groovy outflow of Can and Flower Travellin’ Band, to the pastoral psych funk of “Iron Lung”, with its flute trills and sudden wah-wah guitar vamps. “Lava” is the standout in a truly virtuosic set, KG’s unerring internal logic leading them from Dirty Three-aligned experimental blues, through sweet, psychedelic pop and a high-speed prog wig-out to an outro of cosmic Clavinet shimmering.

Laminated Denim is a very different beast. Like Ice, Death, Planets…, it’s built from jams but is largely digital and plays to a clock – two tracks of precisely 15 minutes each. Time contains KG structurally, but not creatively: “The Land Before Timeland” is a lyrical workout of delicate intricacy, pegged to a light motorik groove over which post-rock/jazzy guitars are interlaced in circular patterns, the whole taking flight at the close via choral vocals and rushing synths. “Hypertension” is every bit as light on its feet and the conversational playing between the Gizzards is equally impressive, but it takes more of a pastoral-prog path, with staccato guitar vamps and Mackenzie’s exultant whoops marking switches in energy and direction. The record’s title is an anagram of Made In Timeland, an album made for KG’s two dates at Red Rocks Amphitheatre in 2020. The two 15-minute tracks were designed to be played during the break between each set, but since Covid put a stop to those shows – twice – KG decided to just release the music. This, then, is a new album recorded especially for the Colorado shows KG finally get to play this month.

The most substantial of KG’s three new releases – and surely their most pop-attuned so far – is Changes. It had a difficult birth. In 2017, the band committed to releasing five albums but also found themselves struggling to finish one particular project. Having set another structural teaser – switching between two different scales with every chord change in each of the songs – they found they couldn’t pull it off. Since there seemed to be no way forward, they abandoned the sessions, diving into Gumboot Soup instead. The unfinished album niggled, but it was left alone until KG returned to it during the pandemic. Though motorik beats carry much of the set and there are prog and sci-fi-metal elements, Changes throws back to tracks like “Ambergris” and “Kepler-22b” (from the terrific Omnium Gatherum) in its tapping of soul, disco and R&B, styled along both classic and modern lines. Across the set it’s lighter on guitars, heavy on synths.

The epic “Change” is a strong opener: it starts with a rinky-dink keyboard-and-hi-hat tune and then morphs into a sleek, ’70s R&B beast, before it’s off and running at a different tempo, nudging Herbie Hancock and Quincy Jones as it goes, then settling into a retro kosmische groove before exiting on a prog charge. Next on the tracklist (a crafty acrostic) is “Hate Dancin’”, which sees singer Mackenzie moving from professed loathing to a deep love of same, over a Michael Jackson/yacht-rock hybrid. The tempo drops for the languid “No Body”, which corrals mid-’70s Floyd into a snapshot of an out-of-body experience. Very different are “Astroturf”, a warning against our sanitising of the natural world, cast in sweet cosmic disco and pastoral prog-jazz, and the hard-driving “Gondii”, which suggests The Cars raised on Neu! and is certainly the first pop song to namecheck a parasitic organism found in cat faeces and uncooked meat. One track saved from the 2017 Changes sessions appears: “Exploding Suns” is a gorgeous, laidback symphony of psychedelic soul and synth jazz, its murmurous, multi-tracked vocals belying the lyrical horror: “Exploding golden sun/Bursting radiation/Get on your feet and run for the shelter/A change is gonna come/Eight minutes and 20 seconds/Over before begun”.

The title is a neat fit, but it’s not only Changes that underscores its makers’ commitment to evolution. And it’s not just this triad, either: from 2015’s Quarters! onwards, KG have demonstrated their future-facing drive in projects with a big-picture aspect that extends even beyond the Gizzverse. The intrigue lies in where that Mach-speed drive takes them next.