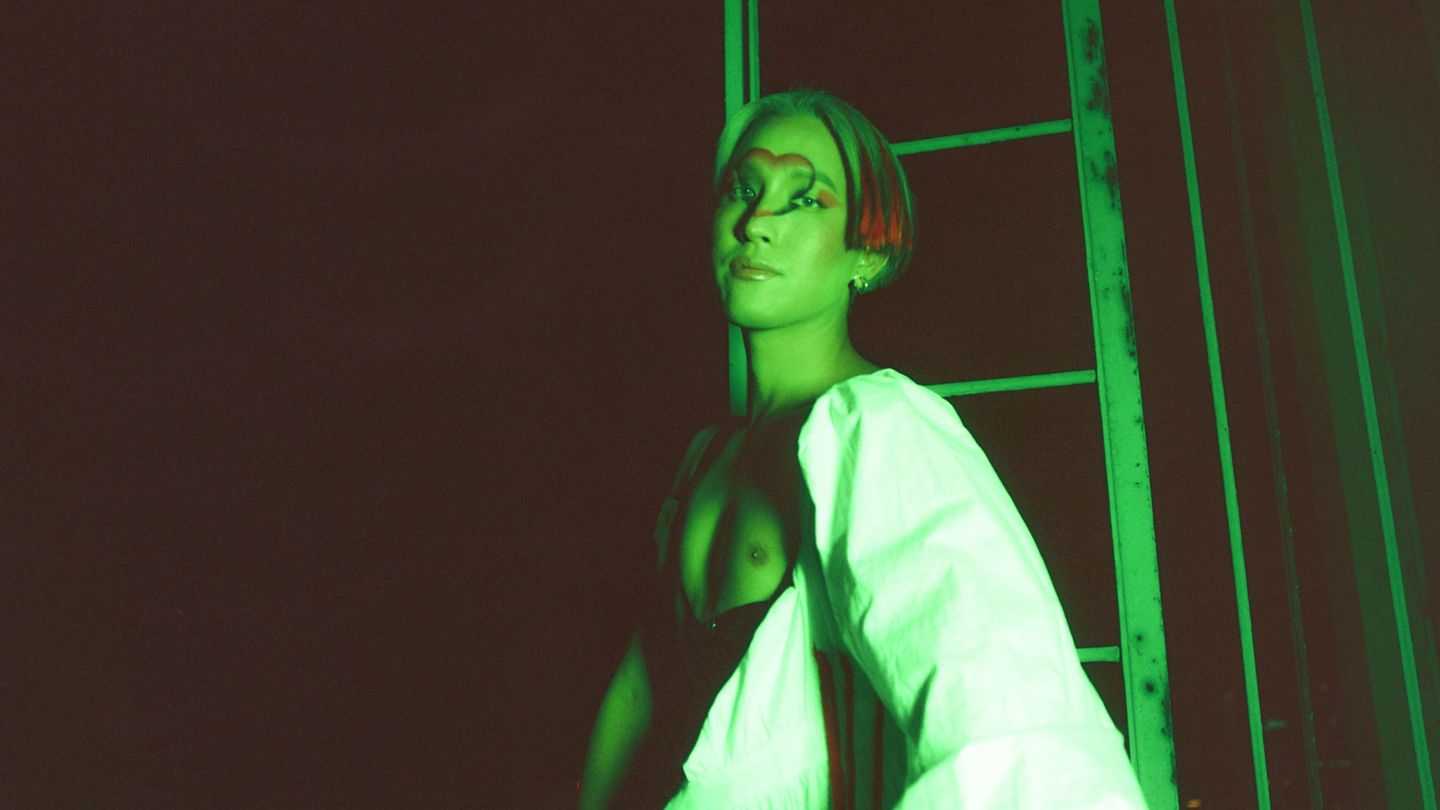 Leadr Is Doing Things Their Way

As a kid, Alexander Tang discovered their love of singing thanks to Madonna. They’d listen to the album True Blue and start joining in on the vocals. They dreamed that, one day, they could see themself shining as a burgeoning pop star on MTV. Now, the confident artist who records and releases electronic and pop beats as Leadr is making good on that.

Leadr embraces self-love and their inner faerie, sporting signature pointed ears and acrylic nails. It’s all part of their artistic identity, showcased in both their visuals — which originate in their head shortly after completing the songs — and their highly personal songwriting.

Their track “Hi, I’m Human,” released in March during a period when anti-Asian hate crimes spiked during the COVID-19 pandemic, was dedicated to the AAPI community and has been featured on Spotify’s AAPI Pride and Out Now playlists. It carries a powerful message that we are all ultimately the same regardless of some of our differences. Meanwhile, “Gaia,” an evocative track inspired by their childhood and past abuse, showcases how music has always been a therapeutic outlet for the Vietnamese-American artist.

“A lot of people care about what other people have to say, you know?” Leadr tells MTV News. “And it’s just like, who the fuck cares? It does not matter. Do you. And if it feels good, and if it makes you happy, go after it.”

Now, Leadr is ready to take all the power back with the release of their debut EP My Way, out on October 29. In addition, they are putting out a series of individual digital artworks inspired by each song. Ahead of the release, they spoke with MTV News about creating My Way and from where their material stems.

MTV News: How would you describe your genre and style of music? And could you mention, too, which artists influence you?

Leadr: When I started out, it was very electronic. Then it became very pop and then indie. Now it’s all over the place. I don’t want to put myself in a box. When I do music, it’s more about the feeling and my mood at the moment, because maybe that next album I’ll do is country, whatever. It really depends. It’s just my mood.

And who are my influences? I would say Grimes — love Grimes. Just love her aesthetic and whole vibe. Billie Eilish, of course. Her voice is incredible. Been listening to a lot of K-pop, like BTS and NCT. But when I was a kid, I loved the classics, like Madonna. Britney Spears, I was obsessed with her. Free Britney!

MTV News: What is the through-line for your new EP, My Way?

Leadr: It’s all about my past life experiences. It was a very healing album, very therapeutic when I was writing it. For My Way, it’s like you’re taking your power back. You’re finding that happiness within yourself, and it’s my way or the highway. And I had a lot of people judge me throughout my whole life. And so I’m taking my power finally. “You know what? Fuck you guys.” It’s my life. It’s my way.

One of the songs on the EP is called “3am,” and it’s about a dream I had where I would go back to my younger self. And my younger self was trying to commit suicide, which I did go through when I was 11 years old, contemplating committing suicide. I said, no, don’t do that. I’m still here. So I wanted to write something like “3am” where people can relate and be like, “They see me, I’m still here.” It does get better. Thank god I had the music because that pushed me through and out. We have to remember that we can breathe and show our gratitude.

MTV News: You were raised in Cherry Hill, New Jersey. From one Asian American and New Jerseyan to another, could you elaborate more on your upbringing?

Leadr: Growing up in Cherry Hill was tough because I was hiding myself. I wasn’t being Leadr. Leadr is my higher self. There was a lot of trauma when I was growing up. I told you I almost committed suicide. A lot of the students were really mean. I was bullied when I was a kid. And also, my parents, they’re very conservative. I was afraid to come out.

The song “Cherry Hill” is about being like, I need to get out of this place to be myself. And so I had to move away. I had to get far, far away. So I went to Pittsburgh, which is weird. I mean, I loved it at the time. But that’s when I came out. And I came out to my twin brother first, who is my biggest supporter, I love him so much. And I knew at that point, I was just like, you know what? Again, fuck it. I’m going to be me.

MTV News: It must have taken a lot to come out to your brother, let alone your twin. But I know twins tend to have a close relationship. When you told him, was he really surprised?

Leadr: I remember just looking at him, thinking, I’m going to tell him. So I told him, and he said, “Really?” I replied, yeah, really. And he was like, “Oh, OK. Whatever.” I was like, oh, that was easy, thank god. After that, I told my friends, and I told my mom.

MTV News: Was your song “Gaia” also mostly based on your life? And what’s the reason you chose a Greek mythological deity as the title and the reference to her in the lyrics?

Leadr: The song is about my past, going through abuse, and the effects of abuse and transference. I’m telling myself and my inner child, don’t do that. Mother Gaia — she is Mother Earth in Greek mythology — telling all mothers that we have to teach kids love and compassion. If we don’t, they will have trauma. It was really hard writing that song. Every time I listen to it, I get really worked up. But also I learned to forgive. Because if we don’t forgive, you’re holding this pain inside the whole time and you can’t live in peace and happiness.

MTV News: Your song “Hi, I’m Human” and its music video are dedicated to the Asian-American and Pacific Islander communities. It really resonated with me, and I’d say it probably resonates with the BIPOC and the LGBTQ+ communities, as well, since the song applies to any person who belongs to a marginalized group.  What was the process like writing the song and making the video?

Leadr: I wrote the song last year with my friend Joey Myron, and it was during that time when the Black Lives Matter movement peaked and the country was going through unease, so I knew I wanted to write something that would bring the country together and show we’re all different but human, [so] we’re all the same. Visually, when I created the story, I knew that I wanted to go through the three levels of the mind: conscious, subconscious, and unconscious.

When you’re watching the video, it’s a loop. Going through everyday life and the words hit you, and then the cuts and bruises, and it just gets worse and worse and worse until you see the child scene, which is my inner child. You have to remind yourself that self-care is very important. Toward the end of the video, you see me watching the hate, the [slurs and other disparaging] words, and I just felt liberated doing that.

MTV News: Growing up, because of your family, did you feel pressured to be more whitewashed or be more Americanized?

Leadr: Going back to the self-hatred of being Asian and being queer, yeah, and you know what, I would say the media is a part of the problem. In Hollywood, Asians are portrayed as nerdy and weak, and women are fetishized. When I went to college and started dating, I remember guys would be like, “Oh, you don’t look Asian. You look very exotic.” I was like, wow. What’s that mean? And so growing up, it’s really hard because I didn’t want to be Asian. I didn’t want to be queer. I had a lot of self-hatred. I had to do a lot of healing for that.

MTV News: With “Hi, I’m Human” being featured on Spotify, how has your journey been as a rising queer Asian-American artist, and who are your biggest supporters?

Leadr: My mom still doesn’t get why I do music. She’s very traditional.  “You have to work, work, work, work, work. You have to work to live.” Sometimes it takes a long time to get it. But she’s like, “OK, whatever. It’s your life.” I told her, Mom, I’m happy. I’m really happy doing it. My dad — he has a music background. He played guitar, so he’s supportive of that. And thank god I have my brother who accepts me for who I am, and who is just very supportive. But I don’t need people to tell me that. I know that I’m proud of myself for doing it. Be proud of who you are, be proud of yourself, do you, follow your dreams, all of that. Because none of that other stuff matters.