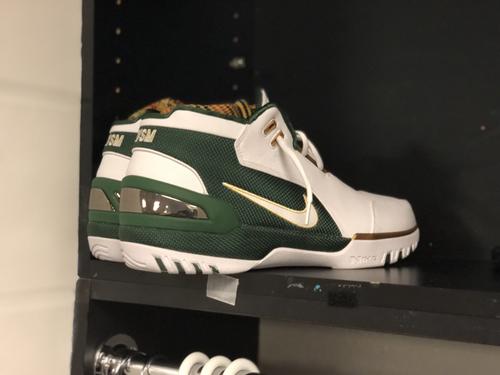 Just days after Nike brought back the black colorway LeBron’s first signature shoe, the Air Zoom Generation, it was announced that the “Wheat” colorway, which ‘Bron wore during the 2004 NBA Rookie vs Sophomore game, is also slated to release in February.

Last night, LeBron hinted at yet another Air Zoom Generation release on the horizon, one that is inspired by his former High School, Saint Vincent-Saint Mary.

LeBron showed f the Irish-inspired Air Zoom Generations prior to yesterday’s showdown with the Boston Celtics and later teased the released by captioning a photo on twitter, “Retro coming soon..?? Just maybe”

The white, green and gold “SVSM” Air Zoom Generation was originally introduced as PE in 2003, and never received an ficial retail release. Although, judging by the AZG’s resurgence and the hints from LeBron that seems likely to change at some point this season.