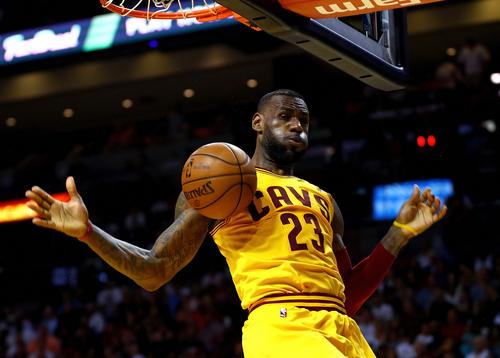 After giving up 148 points (!) to the Oklahoma City Thunder in yet another blowout loss, this time at home in Quicken Loans arena, the Cleveland Cavaliers never looked more vulnerable as one the NBA’s supposed title contenders this season. When approached by the media in the locker room post game, LeBron James was left without much a response, feebly answering questions about the state the team and the coach’s job security.

Speaking with reporters, King James looked bewildered by his squad’s recent performance. “Playfs? We can’t even start thinking about that, not the way we’re playing right now,” James said to ESPN’s Dave McMenamin. “We could easily get bounced early in the playfs if they started next weekend. Haven’t even began thinking about the postseason.” James jokingly remarked that he doesn’t even think his video game teams have ever surrendered 148 points in a single game, let alone in real life. Check out his entire media Q&A session below.

The biggest culprit for the Cavaliers’ recent slide has been their lack ability and/or effort on the defensive end. According to NBA statistics, Cleveland has the league’s second-worst defensive rating – only the lowly Sacremento Kings are even more porous in that area than the Cavs right now. With their Eastern conference opponents only getting stronger with each passing day, there’s no telling how far Cleveland could fall in the standings if they don’t get their act together, and fast.

Do you think Cleveland still has a shot at winning the NBA title this year? If not, who comes out the East in the NBA this year? Let us know in the comments.