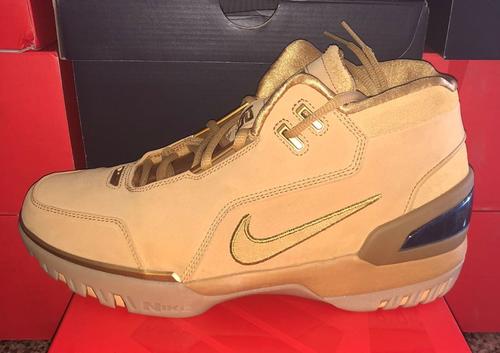 LeBron's Nikes From 2004 Rookie Challenge To Release In February

In 2017, Nike began the process retroing LeBron James signature line sneakers, starting with the Nike Air Zoom Generation which he wore throughout his rookie campaign. Nike has already released the colorway he wore during his first NBA game, as well as the all-black rendition which dropped just before the new year.

Now, the “Wheat” Air Zoom Generation that LeBron wore during the 2004 Rookie Challenge is slated to make its return.

Nike released a similar “Vachetta Tan” colorway last year, but it wasn’t quite a replica the tonal joints that LeBron laced up in the ’04 Rookie vs Sophomore game. The upcoming pair features an all-tan colorway and chrome detailing around the heel just like the OG version.

The “Wheat” Nike Air Zoom Generation will reportedly hit retailers in February, right around the NBA’s All-Star festivities. Take a look at early images the kicks in the IG posts below and keep it locked for an ficial release date.