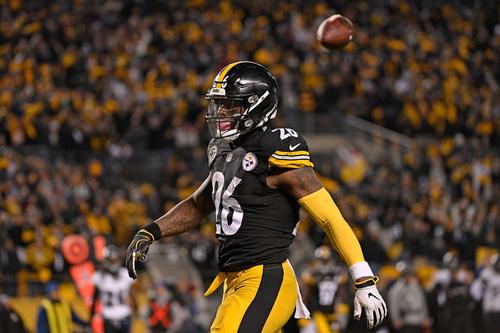 Pittsburgh Steelers star Le’Veon Bell has reportedly told ESPN that he’ll consider sitting out the 2018 season, or even retiring, if the Steelers place the franchise tag on him again.

The 25-year old first-team All-Pro running back played on a $12.1 million franchise tag in 2017, and it isn’t something he’s interested in doing again.

According to ESPN, Bell said he wants the team to “value” him and added he’s “not going to settle for anything.”

“I hope it doesn’t come to that, but I would definitely consider it,” he said before Thursday’s practice.

Asked what the Steelers should do this fseason, Bell said simply: “Value me.”

“Just get the numbers straight, exactly where we want them. I’m not going to settle for anything,” Bell said. “I know what I do and what I bring to the table. I’m not going out here getting the ball 400 times if I’m not getting what I feel I’m valued at.”

Bell rushed for 1,291 yards and caught 85 passes for 655 yards, with 11 total touchdowns in the 2017 season but doesn’t seem bothered by the idea leaving the game football in his prime.

“I’ve made a lot money, I’m happy where I’m at, I’ve got a good family — I don’t really need to play football,” said Bell, who has made around $16 million for his career. “Right now, I’m just kind doing it because I love it. Now, I’ve done everything but own a Super Bowl …

“I don’t necessarily care about the money aspect it. I just want to be valued where I’m at. If I am playing this game, I want to set standards for all the other running backs behind me, like Todd Gurley and Ezekiel Elliott, Melvin Gordon, guys like that. I’m a guy they can kind look at. I feel I can do that. I’m in a position where I can do that, and I’m going to do it.”

He did tell ESPN he hopes to finish his career with Pittsburgh but added, “But if not, I’ll just handle it however I’ve got to handle it.”

Bell and the Steelers will host the Jacksonville Jaguars on Sunday at 1:05pm ET with a trip to the AFC Championship on the line.