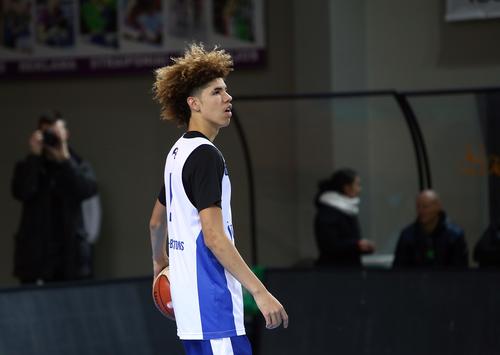 LiAngelo & LaMelo Ball finally made their Lithuania debut Tuesday night where the boys combined to put up 29 points in a 90-80 victory against  Zalgiris’ second team.

With parents LaVar and Tina Ball sitting courtside, UCLA dropout LiAngelo scored 19 points, while his younger brother, LaMelo, finished with 10 and had several no-look assists to wow the crowd in the process.

For what’s it worth, Zalgiris’ second-team featured the top under-18 players from the elite program in Lithuania. While LiAngelo acknowledged that he “wasn’t expecting the game] to be so physical,” LaMelo said he didn’t think there was a big difference from basketball in the States.

“Not a lot,” LaMelo said. “Just another game to me. I think I passed, led and played defense well,” LaMelo added. “My shooting was f, but we won. That was the main thing.”

Tuesday night’s game was broadcast live on Facebook and had more than 120,000 viewers online, while another 1,500 people packed themselves into the tiny gym in the town Prienai.

The team’s next game is Saturday night in a Lithuanian league contest at Lietkabelis, but it’s unclear how much playing time the Ball brothers will receive since the game counts in the standings.

Check out highlights from the Ball’s brothers debut (below) and be sure to tune into Saturday’s game on Facebook.