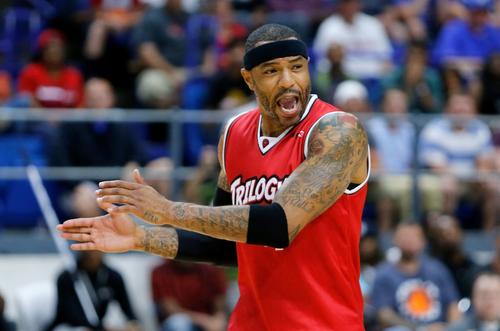 Lil B Challenges Kenyon Martin To 1-On-1: "You Beat Me, The Curse Is Fake"

A few months back, Lil B put the infamous “Based God Curse” on former NBA player Kenyon Martin because comments K-Mart made about Jeremy Lin’s dreadlocks.

In a video posted to Kenyon Martin’s ficial IG account, the former Nets forward says (h/t Nets Daily), “Do I need to remind this damn boy his last name Lin? Like, come on, man. Let’s stop it with these people. There is no way possible he would’ve made it on one our teams with that bulls–t on his head. Come on man, somebody need to tell him, like, ‘alright bro, we get it. You wanna be black.’ Like, we get it. But your last name is Lin.'”

RELATED: LaVar Ball Swarmed By Reporters Upon Arrival In Lithuania

Shortly after K-Mart’s comments went viral, the Based God tweeted, “NBA Kenyon Martin is cursed for his no reason hating on Jermey Lin.. he is cursed until further notice that’s from “ The BasedGod “ – Lil B.”

TMZ Sports recently caught up with Martin and asked about the hex but he didn’t seem at all concerned telling the reporter, “He Lil B] don’t mean shit. He’s a nobody … I just turned 40. Life is good, man!”

And now today, Lil B has ficially issued a challenge to Kenyon Martin to put the “curse” debate to rest once and for all.

“I want to say to Kenyon Martin, I challenge you 1-on-1 to a game and we’ll see if the curse is real or not. You beat me, you’re right … the curse is fake.”