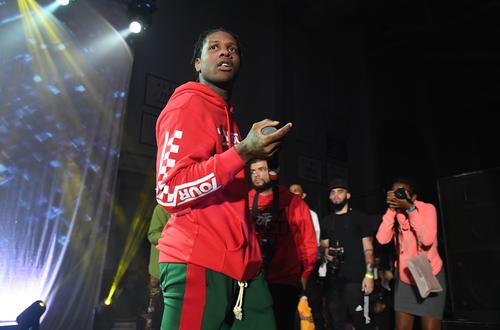 Earlier in the week, Chicago’s Lil Durk decided to take Logic’s “1-800-273-8255” track, a cut dedicated to suicide victims and the overarching theme mental health awareness, and flipped it into “1 (773) VULTURE.”

While the end result was a solid fering, featuring Durk’s signature vocals laced in autotune, the content in his lyrics caused a stir considering the original song’s intent as Durkio let f bars like, “I’ma take a risk, carry my guns inside my joggers / Why you steady playin’ hoe? Let me be their father / Kill his ass in the streets, we hope they don’t charge us / We can’t find your ass, we gon’ kill your artist.”

Durk eventually stepped onto Twitter himself to address what others had to say about the track and noted that he was not trying to “disrespect the suicide people,” asserting that he was actually “talking to the trenches.”

The original track, titled in reference to the National Suicde Prevention Hotline, has since gone triple Platinum in the United States, peaking at No. 3 on the Billboard Hot 100.

“When I created this song I never thought anybody in the world was gonna play it on the radio,” Logic noted in an interview last year. “Like really, you’re going to play a song about suicide on the radio? And I think it was one those things where I’ve just been blessed enough to have an undeniable song that people needed and wanted, and wanted to spread awareness so much that it became hopefully what it’s still becoming.”