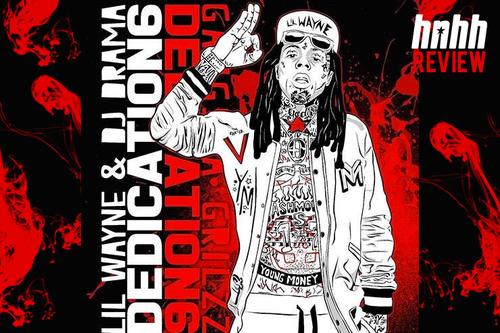 Dedication 6, the new instalment in what could easily be called the most iconic mixtape series all time, begins with DJ Drama reflecting on the game-changing Dedication and Dedication 2, two projects that are not only important statements within Lil Wayne’s vast catalogue, but rap at large. “I’d like for you to take this time and remember where you was the first time you heard Dedication. If I asked you how many times you’ve listened to D2, could you tell me?” Whether you lived through it, or had it passed down to you from someone who did, the projects are a rite passage for any rap fan today. But as Drama’s speech continues through the series, the brags lose a bit their backbone: “Dedication 3 was the first mixtape you heard when we had a black president. D4 and 5, we got back to business.” With the later entries in the Dedication series, the time and place in which you first heard them likely isn’t etched in your memory the same way, and depending how much they meant to you, you might know exactly how many (or perhaps few) times you listened. This, course, is not to play into the reductive narrative that Wayne fell f. The “trash or classic” dichotomy that ten befalls rap discourse led to some fans and critics writing Weezy f somewhere after the release 2009’s No Ceilings. While Wayne’s output from that point on certainly became more spotty than his legendary 2005-2008 run, no great artist, or in this case, one the greatest, simply loses their spark overnight, and D6, like most Wayne’s projects since his hot streak, contains moments that remind us his incomparable skills as a rapper and, more than ever, his influence on today’s generation.

Part the reason Wayne isn’t crashing mixtape sites like he once did (apart from stronger servers) is that the mixtape formula he and Drama helped define is no longer the standard. “Y’all done copied the rhymes. Y’all done stole the artwork. Tried to emulate my shit-talkin’. Weezy and Dram’ — we are the Mixtape Blueprint,” Drama mentions on that same intro, and his claim checks out. The “rapping over popular instrumentals” origin mixtape rap wasn’t created by Wayne, but it was never more popular, or really, done better, than on his late-aughts projects. The importance this era Wayne has allowed him to continue the tradition long after the rest the genre has retired it. Part this is fan service, and part it is the fact that there simply isn’t anyone else we’d bother to hear do it at this point in time.

The rules have not changed at all on Dedication 6, but the context has. It’s never been more clear that Wayne is now rapping over the instrumentals a generation separate from his own, and one that looks to him as an idol. “Lil Wayne is the father our whole generation. The whole spectrum. From Kendrick to Thugger,” Wiki, a New York rapper you wouldn’t necessarily tie to Wayne’s influence, recently tweeted. On the opening track, Wayne takes on Kendrick’s “DNA,” which becomes a surreal role reversal when you look back to Lamar’s early tape C4, in which he not only used Weezy’s beats, but rapped like he was doing “A Milli” karaoke. While Wayne still favors a punchline-heavy approach that now feels like a throwback, he sounds entirely natural adopting Kendrick’s galloping flow. By the time he’s jumped up a full octave 90 seconds in, it’s easy to see the fluid similarities between himself and Kendrick. As for the lyrics, his metaphors and similes have varying payfs, but there are a few that stick like the good old days. “Sippin’ slo-mo at my pace / Lean like I wear a brace,” he raps, proving that he’s still willing to take his wordplay a step more surreal than his peers. On “Everyday We Sick” (YFN Lucci’s “Everyday We Lit”), he sounds far more comfortable than anyone else from his generation slipping into an emotional Atlanta rap melody, probably because his early auto-tune experiments laid the foundation for that scene in much deeper ways than the ten-cited 808s & Heartbreak (just ask Young Thug).

Wayne’s beat selection throughout the project is as representative contemporary rap as his past mixtapes. Massive hits like 21 Savage’s “Bank Account,” Post Malone’s “Rockstar,” and Lil Uzi Vert’s “XO Tour Llif3,” are all here, as they should be. On “Rockstar,” Wayne brings new energy to the sedate hook, and on “XO,” he finds pockets unexplored by Uzi as he opts for a more complex rhyme scheme on his verses. With “Young,” he takes on G-Eazy’s “No Limit,” repurposing Cash Money vet Mannie Fresh’s “Get Your Roll On” flow and once again using his decades experience in rap to bridge the gap between eras. There are no moments where Wayne re-envisions a song entirely and renders the original obsolete a la “Sky Is The Limit,” but that doesn’t seem like the point. Throughout, Wayne sounds like he’s having fun, something that didn’t come across a few years back when he seemed more inspired by skateboarding than music. He doesn’t come f quite as hungry as when he was trying to prove he was the greatest rapper alive, but rather content with doing what he does best in a comfortable familiar place.

The project features a number Young Money affiliates, who have been overly represented since Dedication 3, and while they do have their moments (Gudda Gudda is at his tough-talking best on “New Freezer”), they mostly feel like a distraction from the star the show. As a result, the solo tracks where Wayne is able to feel out the entirety the instrumental are highlights.

Strangely enough, the most captivating Wayne record the last week, “Family Feud,” does not appear on the project. Featuring a strong verse from Drake, Wayne sounds challenged in a way he does not across Dedication 6, bringing a flurry new flows and ideas to the Jay-Z instrumental that take it in a completely new direction from the original. The song arrived with the promise a second-half D6 to arrive in the near future, and suggests that the mixtape, while a perfectly satisfying low-stakes release, isn’t all he’s got. After all, he still has Carter V is the stash, and that’s not something he’s willing to give away for free. “I had forgotten every single word on it, because I work every day,” he told the New York Times C5 last year. “I popped it in, and I was like, it’s still so much better than everything I’ve ever heard. Not what’s going on right now — everything I’ve ever heard.” By this time next year, the words on D6 may be forgotten as well, but for now, it’s nice to check in with one the greatest to ever do it on his home turf.