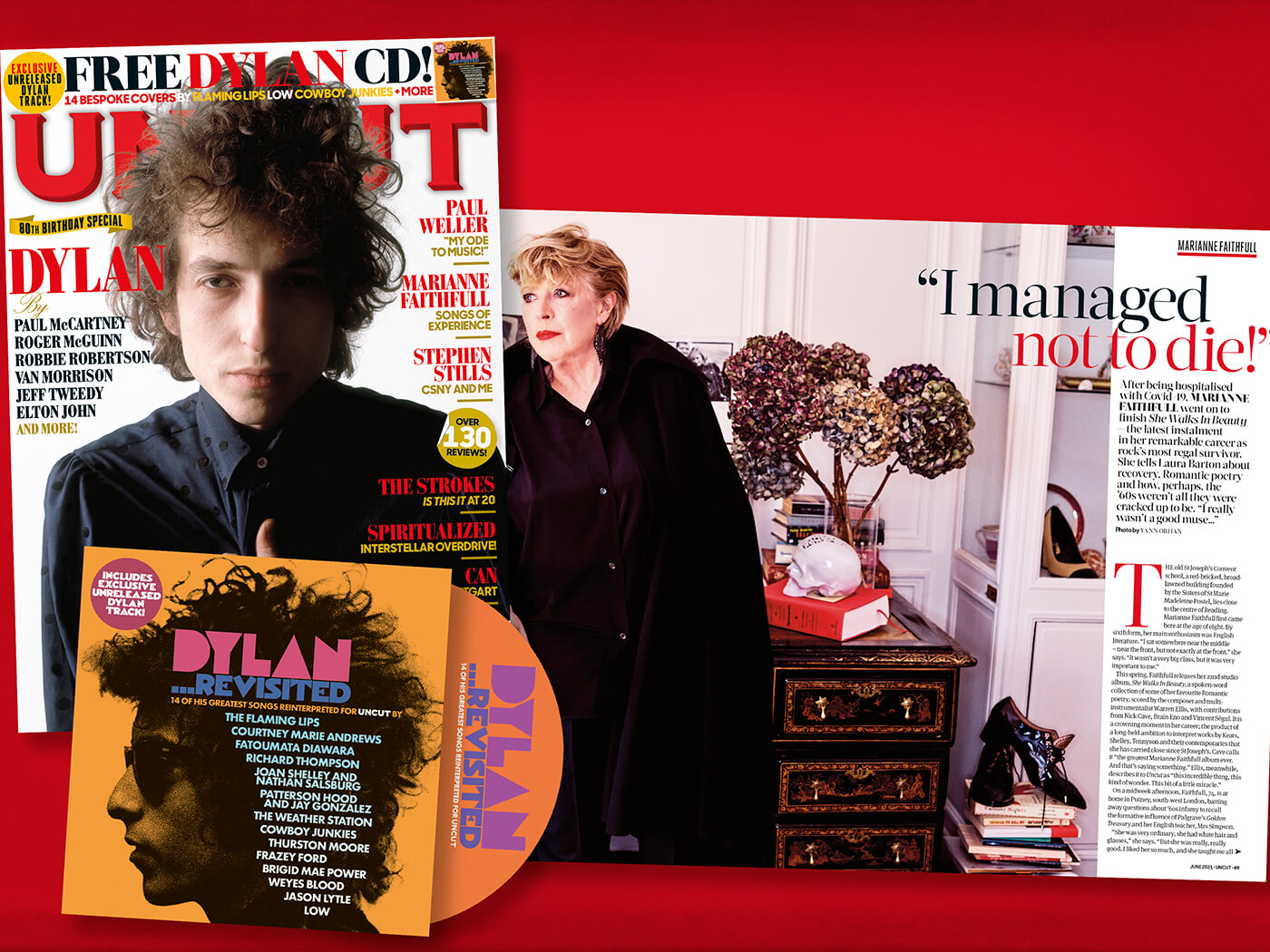 Marianne Faithfull: “I managed not to die!”

The new issue of Uncut – in shops now or available to buy online by clicking here, with free P&P for the UK – includes a candid interview with Marianne Faithfull about new album She Walks In Beauty, the latest instalment in her remarkable career as rock’s most regal survivor, completed after her hospitalisation with Covid-19. She tells Laura Barton about recovery, Romantic poetry and how, perhaps, the ’60s weren’t all they were cracked up to be. Here’s an extract…

On a midweek afternoon, Faithfull, 74, is at home in Putney, south-west London, batting away questions about ’60s infamy to recall the formative influence of Palgrave’s Golden Treasury and her English teacher, Mrs Simpson.“She was very ordinary, she had white hair and glasses,” she says. “But she was really, really good. I liked her so much, and she taught me all this stuff about the Romantics. She taught me for that first year, and then of course I was torn away, and I was discovered…”

The story of how Marianne Faithfull was discovered – a teenage ingénue fêted by the in-crowd and caught up with the Stones, then duly lost to scandal and addiction, has coloured much of her career. For a long time, the popular imagination carried her as a kind of tragic muse, a victim of her own beauty and the era’s excesses. Later it recast her as a fighter, a treasure, an artist of indefatigable spirit.

Today, she sounds determined and faintly amused. She has a deeply fragrant voice, grown a little hoarse following a serious altercation with Covid that kept her in hospital for several weeks last spring. “I got terribly ill. I don’t really remember it, but apparently I almost died,” she says. “I managed not to die.”

Still, the effects of the illness have lingered – she warns we might have to conduct our interview in segments, to allow her breaks to recalibrate. “It’s been very hard to cope with,” she explains. “Particularly my lungs, because I used to smoke, and I have of course got emphysema or whatever they call it now.” She pauses. “It’s got another name, and that’s the big problem – my memory, and the fatigue. I’m sorry, I shouldn’t be talking about this! Not the point!”

The point is that before she contracted Covid, Faithfull had begun work on She Walks In Beauty. “When I came out of hospital I finished it,” she says. “I was worried: would I be able to do it? But I was, amazingly enough. It’s a miracle, really. It’s beautiful, because the ones I did post-Covid are very, very vulnerable and that’s kind of lovely.”

She Walks In Beauty, her 22nd studio album, is a spoken-word collection of some of her favourite Romantic poetry, scored by the composer and multi-instrumentalist Warren Ellis, with contributions from Nick Cave, Brian Eno and Vincent Ségal. It is a crowning moment in her career; the product of a long-held ambition to interpret works by Keats, Shelley, Tennyson and their contemporaries that she has carried close since St Joseph’s. Cave calls it “the greatest Marianne Faithfull album ever. And that’s saying something.” Ellis, meanwhile, describes it to Uncut as “this incredible thing, this kind of wonder. This bit of a little miracle.”

You can read the full interview in the June 2021 issue of Uncut, out now with Bob Dylan on the cover and available to buy direct from us here.