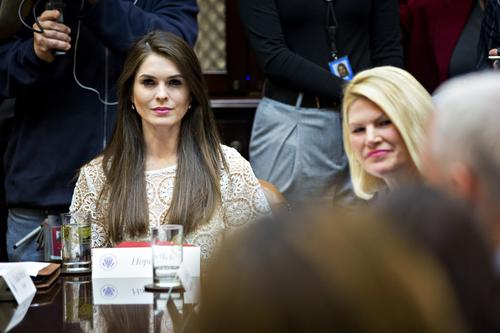 If you thought Donald Trump was the only person in the White House saying and/or doing some crazy things, then think again.

In a new book titled Fire and Fury: Inside the Trump White House, author Michael Wolff has made some shocking revelations about not only the President, but also about several members his campaign staff, including current communications director Hope Hicks.

As per Newsweek, Hicks, who is a long-time Trump aide, supposedly had a steamy affair with Corey Lewandowski, the man who managed 45’s presidential campaign for a time and, if you remember, was fired after he reportedly became a toxic presence within the group staffers trying to get Trump elected. That isn’t even the juiciest part either. Wolff also states that Trump told Hope, prior to the general election, that she was “the best piece tail” that Lewandowski would ever have. Talk about bombshell.

There’s been no ficial response from Hicks, Lewandowski or Trump on the book’s revelations as this writing, but knowing how quickly the current White House administration is to point fingers, we shouldn’t have to wait long for one. As for whether or not this will damage Hicks’ reputation in the eyes the President, that doesn’t seem likely.

In a November interview with the same publication, another Trump staffer described Hicks’ relationship with 45 as follows: ““She has a great ‘Trump radar’ in] understanding how he thinks… She loves him like a father in some ways, and I think that is an important loyalty to the family.” Only time will tell if the public backlash will have any impact on her job security in the short term.