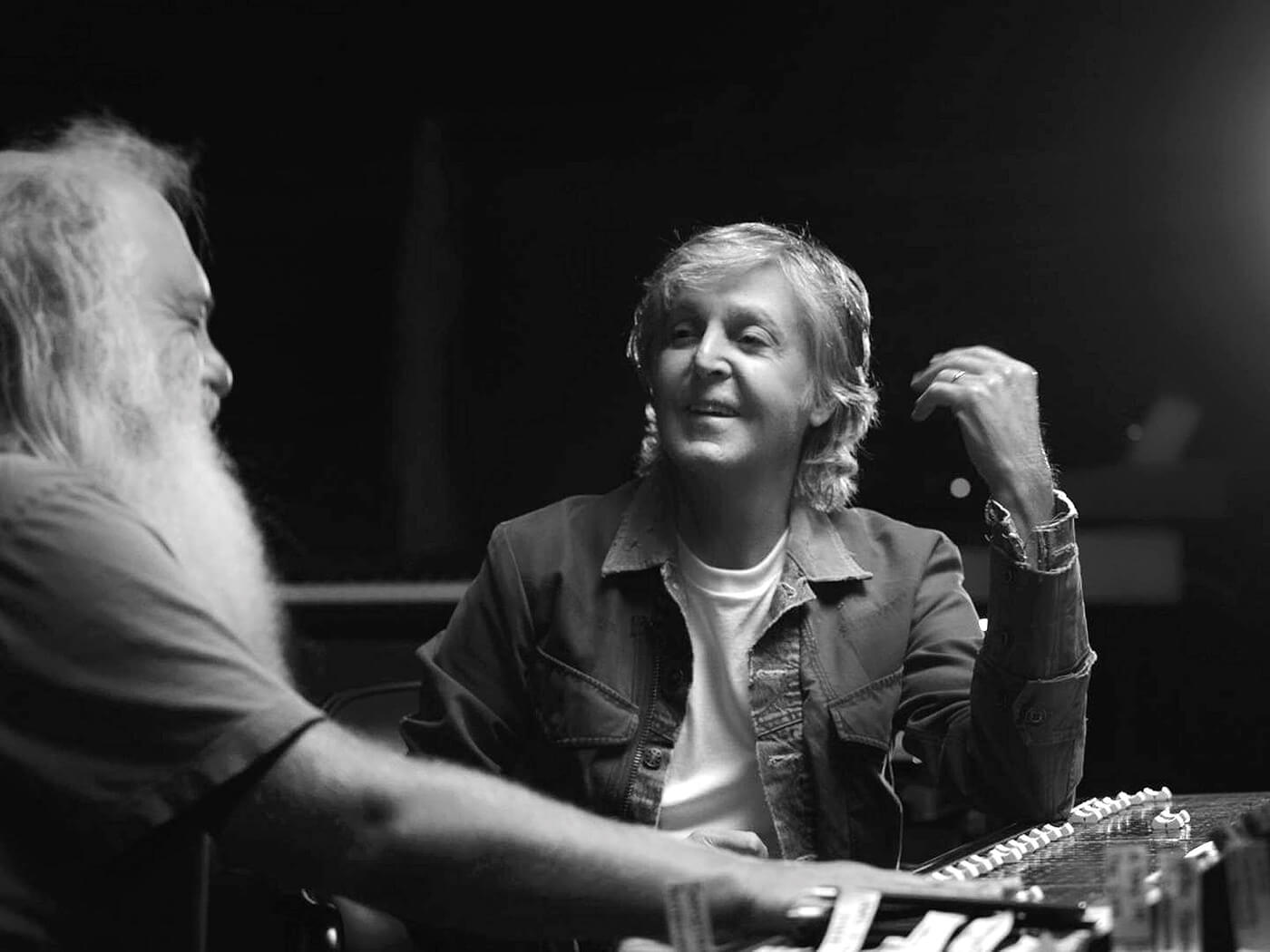 You can watch McCartney 3,2,1 in any order. It’s not sequential. But it just so happens that the exchange that takes place at the top of the first episode tells you what you can expect from Disney+’s six-part Maccamentary. Rick Rubin asks Paul McCartney, “Are you up for listening to a bit of music?” And Paul, sitting opposite him in a low-lit warehouse space where someone has conveniently left a mixing desk, says, “Yeah, what have you got?”

And that, in essence, is the concept of McCartney 3,2,1. It sounds simple, but actually, it’s really not. While interviewing people might not be the hardest thing in the world, the really good ones make it look much easier than it is. In the case of Rick Rubin – whose Broken Record podcasts are also adhere to the same rule – it’s a matter of not saying anything unless you absolutely have to.

In fact, it’s mostly in the eyes, and with McCartney that’s perfect. Because McCartney is all about the eyes. That’s why over the course of his life, his eyebrows have slowly travelled halfway up his forehead and forgotten the way back. It’s the face you make when you want someone to look back at you and know that you’re on the same wavelength. Seated on opposite chairs, it’s what he and Lennon did when they wrote songs together. Chas Hodges of Chas & Dave once recalled McCartney playing him a test pressing of the just-finished Revolver and McCartney staring at him the whole time, reading every nuance of Hodges’ response. It discombobulated him so much that he still talked about it decades later. And in these programmes, McCartney clearly gets a lot back from Rubin’s eyes. The producer’s gaze is rapt, respectful, affectionate – and McCartney reciprocates by relaxing into a mixture of anecdotes you already knew and a few that certainly this writer didn’t.

Examples of the latter include a story about the naming of his first solo album – he’d heard a rumour that John was going to call his first solo album Lennon and when it turned out not to be true, he liked the idea so much, he used it for McCartney. There’s also a nice verbal pencil-sketch of a hitch-hiking sortie with George Harrison – Paul whipping out a camping stove and heating a tin of Ambrosia rice pudding for them to share (Rubin seems tickled by the brand name).

Rubin’s interjections, though infrequent, almost always yield fresh insights. He fades up McCartney’s bass part on While My Guitar Gently Weeps and notices that it’s like a completely different song playing in parallel with what the rest of the band is doing. As if to both illustrate and run with Rubin’s point, McCartney then improvises a new tune over the top of it. What you’re watching in that moment isn’t so much memory muscle as melody muscle.

Talking about the same song, McCartney ponders the generosity of Harrison in inviting Eric Clapton to play a solo that he Harrison could have played himself. Rubin asks, “Did you think of him as George’s friend or the guy from Cream?” Without hesitation, McCartney responds “George’s friend”, which tells you something about the esteem in which they held each other compared with their immediate contemporaries. This, in turn, prompts McCartney to remember an early Jimi Hendrix set at the Bag O’Nails. Hendrix opened the show with Sgt Pepper’s Lonely Hearts Club Band (this being just two days after its release) and deliberately detuned his guitar as he played the song, meaning that he would need to pause before the second song in order to get his guitar back in tune. Spotting Eric Clapton at the back of the room, Hendrix summoned Clapton to the stage and asked him to do it for him.

With the exception of Fela Kuti, who “was so incredible” when he saw him in Lagos “that I wept”, the musicians that mostly inspired McCartney were American. We know about his adoration of Little Richard, Ray Charles, but it’s interesting to hear him rhapsodise about legendary Motown sessioneer James Jamerson, whose thrillingly complex basslines emboldened McCartney to perform a comparable role in The Beatles.

Mostly though, the talk centres around the nuts and bolts of song-making. McCartney makes the point that one reason the earliest Beatles songs were so catchy was sheer necessity: “We were writing songs that were memorable, not because we were trying to write songs that were memorable, but because [in the absence of anything on which to record them] we had to remember them.” Perhaps the most pleasing detail of McCartney 3,2,1 is that the songs selected by Rubin aren’t always the most obvious. Not only do we get 1981 single Waterfalls, but we see McCartney’s delightedly animated response to the ebullient proto-electronica of its B-side Check My Machine.

Perhaps most surprisingly, for an artist who is so famously focused on reminding people that he’s still creating, still looking for the next hit, there’s no mention of the recently released McCartney III. Indeed, nothing released by him in the past 40 years make the cut here. Does this suggest that a second series might be in the offing? The other inescapable question that descends upon you as you watch Rubin – who has form when it comes to bringing out the best of music legends in their third act – and McCartney in a room with a mixing desk, a piano and a guitar in it is: why not record some new songs together?

At one point, McCartney even plays a rather lovely new composition on the piano. Rubin remarks that it sounds like it’s always existed. Paraphrasing Mozart, McCartney responds, “I write the notes that like each other,” as if that were the easiest thing in the world. And while it remains unsaid that it’s anything but that, you laugh. Just like you would at any other punchline.