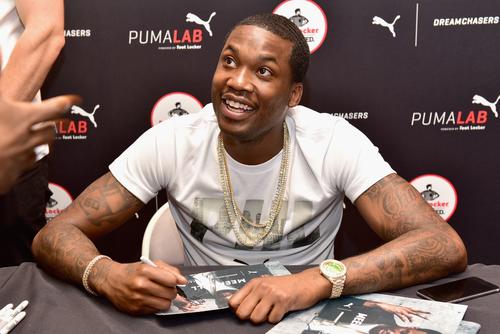 According to new reports, the latest twist in the ongoing saga between Meek Mill’s legal team and Genece Brinkley, the judge who has overseen Meek’s case for the past nine years, has ended up with Judge Brinkley and her own attorney threatening to sue the Philadelphia rapper’s lawyers for defamation.

Since Meek Mill’s sentencing to two to four years in prison back in November, his attorneys, headed up by Joe Tacopina, have actively sought to discredit Brinkley’s ruling, accusing Brinkley allowing personal bias to reign over her judgement after alleging that she held a personal vendetta against the emcee when he did not return to his former manager and one Brinkley’s associates, Charlie Mack

“What you have is an organization — extremely wealthy — who wants to attack a sitting judge,” Brinkley’s attorney, A. Charles Peruto Jr. told the Philadelphia Inquirer. “It’s ‘How much money can you throw at a case and make your allegations stick?’ Her reputation has been severely damaged within the last month. We absolutely believe she has an absolute solid case.”

Well, Tacopina is certainly not going down without a fight, and recently issued a response to the new threat.

“We look forward to a lawsuit from the judge and taking this to court where she will have to be deposed under oath and speak the truth,” Tacopina recently told HipHopDX. “We are not shocked that Judge Brinkley has resorted to this tactic. She has filed 29 lawsuits, including lawsuits against the Hershey Estate and the Hershey Entertainment Resorts Company in Philadelphia Municipal Court, settled for $15,000 and claimed ‘trauma,’ ‘sleeplessness,’ ‘flashbacks,’ and ‘nightmares’ that she blamed on the hotel, where she had stayed for a 2012 judicial conference.”

“Brinkley claimed that her emotional distress was triggered when she woke up in the middle the night to find a housekeeper’s name badge in her bed,” he went on to add. “She also had sued The City Philadelphia and tenants where she has tried to take advantage by using her title as a judge to intimidate them.”

Tacopina also went on to paint Peruto as an opportunist in his statement, revealing that he attempted to join Meek’s legal defense team just days after his sentencing.

Earlier last week, Brinkley released transcripts to prove that it was not her, but a probation ficer who urged Meek to go back to Charlie Mack while Tacopina and fellow attorney Jordan Siev released transcripts their own, dating back to 2012, that revealed otherwise and at this point, there’s no telling when and how this game cat and mouse will come to a close.