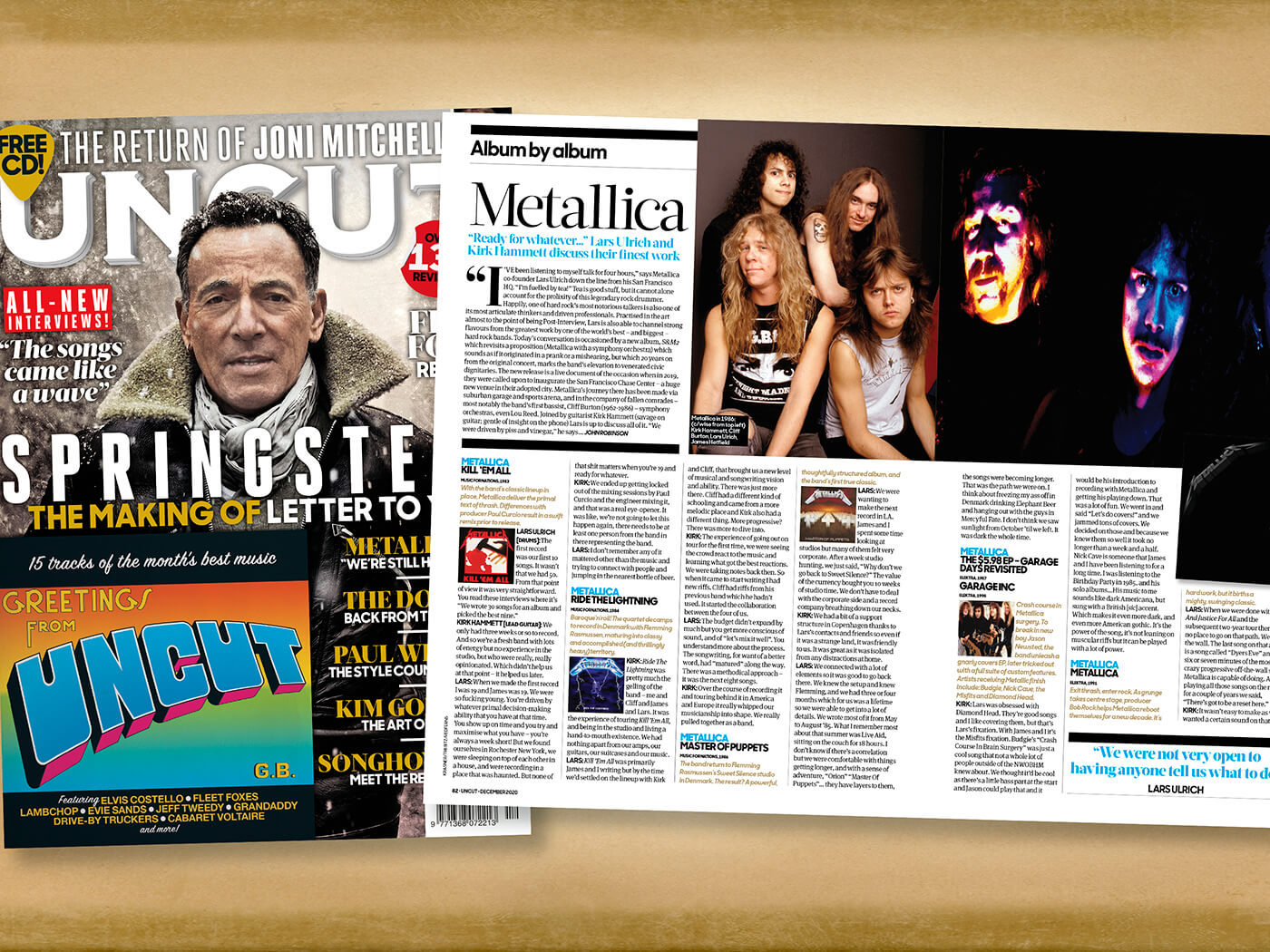 Metallica: “We were not very open to having anyone tell us what to do”

In the latest issue of Uncut – which is in shops now or available to buy online by clicking here – Lars Ulrich and Kirk Hammett of Metallica talk us through the finest albums of their career. In this extract, they reveal how they made their classic 1991 self-titled effort, also known as ‘The Black Album’, on which producer Bob Rock helped Metallica reboot themselves for a new decade.

LARS: When we were done with And Justice For All and the subsequent two-year tour there was no place to go on that path. We’d hit the wall. The last song on that album is a song called “Dyers Eve” and it’s six or seven minutes of the most crazy progressive off-the-wall stuff Metallica is capable of doing. After playing all those songs on the road for a couple of years we said, “There’s got to be a reset here.”

KIRK: It wasn’t easy to make as we wanted a certain sound on that album. We wanted everything to be the best it possibly could be, sound-wise, song-wise and performance-wise and so we went in and – I’ll probably be the first person to mention this –we wanted to come up with a Back In Black, an LP stacked with singles. That was the concept, songs which sound like singles but aren’t.

LARS: We sat down and thought about The Misfits, AC/DC and the Stones. We thought about the art of simplifying and writing shorter songs. It’s harder to write a short song than a long song and harder to be succinct. The new challenge was to write shorter songs. A little more bounce, to make the music more physical than cerebral.

KIRK: I was listening to a lot of stuff out of the Pacific Northwest, and I’d been listening to the first Soundgarden album since 1987. I didn’t think of it as grunge so much as Sabbath-y. That movement changed the look and style of a lot of bands, and how bands should be at the time. Because we were kind of an entity unto ourselves when grunge came out, people didn’t point at us, because we were who we were. Grunge was calling foul on these other bands but because we were ourselves, we weren’t scrutinised!

LARS: The other part was that we picked up with Bob Rock who had recently worked with The Cult, Mötley Crüe and Bon Jovi and had a different approach to sonics. We were interested in having our records be a little bigger and more impactful. That was the next significant thing. We’ve never been in the studio with someone who was challenging us in the way he was. The good news was Bob was very encouraging of us expanding our processes. The bad news was we were not very open to having anyone tell us what to do. When we walked out of the studio a year later with the ‘Black Album’ in our pockets I don’t think any of us thought we’d see each other again. But we ended up spending the next 10-12 years making records together. It was a love affair, but it got off to a rocky start. But thankfully he pushed and challenged us. He didn’t accept our refusal to be experimental and to cast the net wider.

You can read about the making of eight more Metallica albums in the December 2020 issue of Uncut, out now with Bruce Springsteen on the cover.