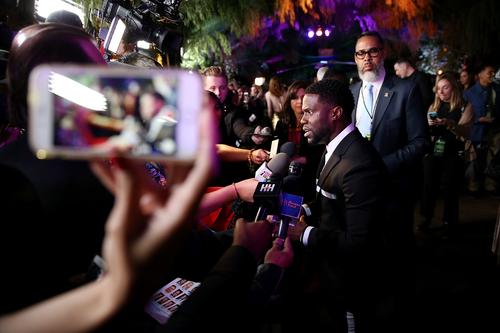 Michael Blackson’s feud with fellow comedian Kevin Hart just got taken up a notch, after the Philly native took some new shots at the Jumanji star in a recent stand-up performance.

RELATED: Kevin Hart Wants To Help You Start 2018 Off On The Right Foot

As reported by TMZ, Blackson continued to clown Hart mercilessly during his live show, serving up several digs that had to do with Kevin Hart’s height and, perhaps more importantly, the fact that he cheated on his then-pregnant wife. The performance, which you can view part below, took place at the Wilbur Theater in Boston, where Blackson called Hart a “midget with a regular n***a’s head” and a “punk bitch,” among many other insults. There hasn’t been any public response from Hart at the time this writing.

Why is the beef so heated? Well, Blackson took fense to something Hart said about him prior to the holidays, when he rolled up to The Breakfast Club radio show and, in the process promoting his latest film, managed to get in some digs his own. Referring to Blackson as “the Instagram model that just shows her ass and is looking for love,” it was Hart’s response to Blackson using his much-talked about cheating scandal as fodder for his comedy routine. Blackson later re-shared that radio show clip and aired the movie star out.

In the accompanying caption, Blackson wrote: “Call your writers because when I’m done with you u will commit suicide by jumping f the curb you short f**k …] You fooled America too long you corny pitbull looking beech.” Looks like these former friends are now squarely in foe territory.