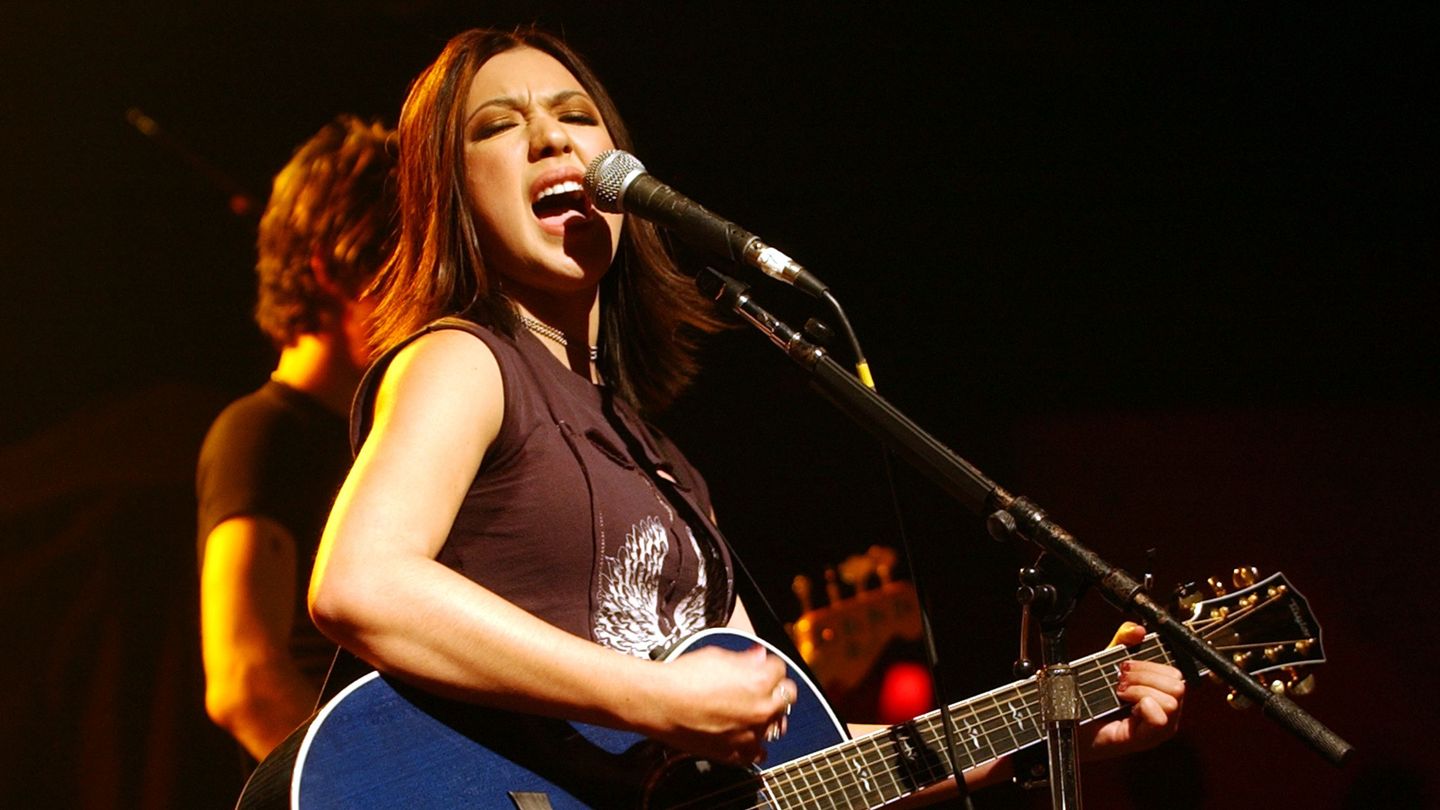 Michelle Branch Is Back In The Spirit Room, 20 Years Later

Michelle Branch likens the whirlwind road to success of her debut album The Spirit Room to that of fictional band The Wonders in the 1996 film That Thing You Do! “The band is recording, then they leave the studio and [their song is] on the radio, and next thing you know, they’re being chased down the street by fans,” she tells MTV News over the phone. “It was not dissimilar to that.”

Upon the release of The Spirit Room in 2001, Branch was everywhere — pun intended. Almost entirely self-written, the album and its singles “Everywhere,” “All You Wanted,” and “Goodbye to You” soared to the upper tiers of the Billboard charts and launched a lasting career for the then-teen singer/songwriter. As The Spirit Room turns 20 on Saturday (August 14), she’s decided to celebrate its anniversary by re-recording the album and pressing it on vinyl for the first time. It’s a new take on the legacy of the album that seemed destined to launch her career from its earliest inception.

Growing up in Sedona, Arizona, Branch begged her parents for a guitar for years and finally received one at 15 years old. Within a couple weeks, she wrote her first song and immediately began refusing to attend school, determined to pursue music full time. “My parents were really frustrated with me,” she says. “We came to an agreement that I could do correspondence courses, finish school that way, and spend time working on my music.” Recognizing her instantly impressive songwriting chops, they supported Branch’s artistry, helped her land local gigs, and record a demo tape to sell at shows featuring “I’d Rather Be in Love,” “Sweet Misery,” and “Goodbye to You,” which would all end up on The Spirit Room. Then, on a summer afternoon at home, she received a sudden, life-changing call from a family friend who sold timeshares.

“[They] said, ‘There’s someone from Los Angeles here, and they said they work in the music business. I’m giving them a timeshare tour. Get down here.’” But Branch’s parents were at work, and she didn’t have a driver’s license, so she asked to borrow a neighbor’s Harley Davidson golf cart and drove to the condominium, demo tape in hand. “I didn’t have any [headshots] or anything,” she recalls, “so I literally cut a picture of myself out of a family portrait and stuffed it into the tape.”

She arrived, met the man, Jeff Rabhan of Maverick Management, and gave him the tape, which he annoyedly accepted (her impression, anyway) before embarking on his eight-hour trip back to L.A. During the drive, Rabhan has since told her, he got into an argument with his then-girlfriend and played the tape to fill awkward silence. Stunned by her songs, he contacted Branch, offered to manage her, and helped her expand the demo into a full-length independent album titled Broken Bracelet, featuring the aforementioned Spirit Room tracks as well as “If Only She Knew.” After sending it out to a few industry executives, he landed her a spot opening for Hanson at The Wiltern, attended by Maverick Records A&R rep Danny Strick, who offered her a record deal moments after she finished her set. “It all happened so easily and quickly,” she says with a laugh.

Soon, Branch began meeting with potential producers for what would become The Spirit Room. Strick connected her with John Shanks, who had worked extensively with Melissa Etheridge and Fleetwood Mac. He was producing Stevie Nicks’s album Trouble in Shangri-La at the time. In their first studio session, they wrote and recorded “You Set Me Free” in a few hours. Shanks was taken aback by the then-17-year-old’s writing skills and unique vocal stylings — “Michelle-isms,” he calls them, referring to her tendency to elongate words at the end of lyrical phrases. “I said to her, ‘This might be our only day working [together], but I’m going to tell you something,” he recalls. “You are gifted, and you are special… What you’re bringing to this vocal is what’s selling the song.”

They sent the record to Strick, who was impressed and expanded Branch’s budget to work with Shanks on a total of three songs. Shanks recalls Branch playing him “All You Wanted,” her favorite track on the album to this day, in its entirety on acoustic guitar. “She finished and said, ‘What?’ And I’m like, ‘I don’t have any notes. My job is to not screw it up when we record it,’” he says, noting that the top-10 hit’s lyrics and melody are nearly identical to her original rendition. Then, he asked her to play any song ideas she was looking to flesh out. “She goes, ‘Well, I have this “Everywhere” song, but [the label executives] don’t really like it.’” Despite Branch’s hesitancy to go against the label’s direction, Shanks heard the song’s potential and insisted they finish it, subtly tweaking its melody to achieve an explosive hook.

When he told the executives they’d worked on “Everywhere,” they weren’t thrilled. But once he played it for them, they were sold. “That was the green light,” he says. “That was like, ‘You guys can do whatever you want.’” Maverick again increased Branch’s budget to make seven songs with Shanks. But unbeknownst to the label, the pair was working fast and completed “the bare bones” of The Spirit Room’s 11 tracks in “three-and-a-half to four weeks” — quicker than they could even process Shanks’s invoices. “The label was not involved at all. We made it so quickly that nobody knew it was happening,” Branch says. “John and I worked so great together. I never felt like I was being undermined. I always felt supported by him.”

While the album was being mixed and mastered, Maverick held a meeting for key executives to hear a few of the tracks. Branch recalls being warned by Shanks, Rabhan, and Strick that the attendees would likely refrain from outwardly praising the music, as their jobs are strictly to strategize its promotional plan. “We were nervous playing it for them because it was our baby, and the first song we played was ‘Everywhere,’” she says. “I remember the minute the song stopped, [Ted Volk, Maverick’s then-head of promotion] screamed out loud, ‘Holy shit, this is a fucking hit song!’”

Volk was right. Branch’s career immediately skyrocketed upon its release in July 2001. “Everywhere” reached No. 12 on the Billboard Hot 100 and No. 5 at Top 40 radio, and its Liz Friedlander-directed video earned a Moonperson for Viewer’s Choice at the 2002 VMAs — thanks in part to its popularity on TRL, where she performed the track and even co-hosted. “MTV was hugely instrumental in the record being what it was,” she says, remembering moments like the time she asked host Carson Daly out to the VMAs. “Someone [recently tweeted] that they remember watching MTV [on September 11, 2001], and they were playing the ‘Everywhere’ video when they cut to the footage of the Twin Towers. I was like, ‘Fuck.’ That’s the craziest memory of those days.”

“Everywhere” set The Spirit Room up for its eventual double-platinum success, serving as a launching pad for the equally huge follow-up singles “All You Wanted” (No. 6 on the Hot 100) and “Goodbye to You” (No. 21 on the Hot 100). A majorly surreal part of the promotional cycle, Branch says, was when she performed the latter track live in episodes of Buffy the Vampire Slayer and Charmed. “I was like, ‘I was just watching these in my bedroom in Sedona, Arizona not that long ago. This is crazy.”

The Spirit Room’s impact went far beyond Branch’s own career, as its guitar-heavy pop-rock sound sparked a wave of teen pop artists following suit, from Avril Lavigne to Lindsay Lohan and Ashlee Simpson, all of whom also worked with Shanks. At the time, Branch and her peers were often grouped together and discussed as “anti-Britney” pop stars, a pointlessly sexist contrast that she simply chalks up to the fact that she wrote her own songs and didn’t dance onstage. “I was a Britney Spears fan, so it wasn’t like I was anti-Britney at all,” she says. “It was just people trying to find clickbait before there was clickbait.”

Branch’s debut has even inspired artists past the early aughts, as Taylor Swift once told her she bought a blue Taylor guitar because of her. Of course, Swift would go on to inspire Olivia Rodrigo, a main player in reviving the 2000s teen pop-rock genre Branch was instrumental in crafting. “Music is cyclical,” Branch says. “To be able to pass the torch in that respect, especially to younger women, is amazing.” While Swift is currently re-recording her first six albums in order to own the masters, Branch’s motivation for revisiting The Spirit Room is different; inspired by Alanis Morissette’s acoustic 10th anniversary edition of Jagged Little Pill, she’s reimagining the songs of her debut in the sonically stripped back, “bare-bones way” she performs them live today.

Shanks was slated to reproduce the record, but due to the pandemic, Branch and her husband, The Black Keys’s Patrick Carney, ended up producing it themselves. They hope to strike the right balance between nostalgia and newness. After all, her voice has matured since the original pubescent studio sessions, so she’s re-recorded the songs in a slightly lower, more comfortable key. But there’s one aspect of the original she couldn’t avoid: her signature “Michelle-isms.” Recalling how early aughts haters were annoyed by her penchant for adding “extra syllables to words,” she was excited to update the vocals, “but those extra syllables are a part of the melody in a weird way,” she says. “It’s not something I can get rid of.”

Working to rerelease The Spirit Room has otherwise been a relatively seamless process for Branch, who remains on good terms with those in charge of her original material. “I contacted the original photographer who did the cover, and he had archived the shoot,” she says, noting that she’s picked an outtake for the new artwork. This time around, however, she’s signed to the Warner Music Group’s Nonesuch imprint, where she also plans to release her next album — which is finished — in “hopefully spring of next year.” But first, she plans to perform The Spirit Room from start to finish in a livestream concert and then hopefully a string of in-person shows, pandemic permitting.

Revisiting The Spirit Room 20 years after its initial release has given Branch “a different appreciation” for the album and forced her to reflect on experiencing success at such a young age. (“It definitely puts it in perspective, because my daughter just turned 16 a few days ago.”) The most mind-boggling part of looking back, Branch says, is being on the other side of the “Where do you see yourself in 20 years?” question she was often asked in interviews. “I was saying, ‘Well, I hope I’m making music,’ and I’m happy to say I am, and that I’m really proud of that stuff I put out at that age,” she details. “It’s still a rush for me to play the opening guitar part of “Everywhere” and watch a crowd react to it. It will never get old. These songs changed my life, and I’m able to make music for a living, which is the biggest blessing in the whole world.”