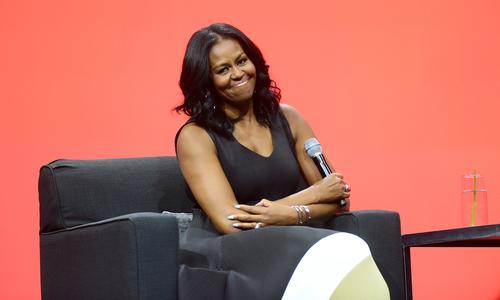 Today is a special day for a very special former First Lady the United States. January 17th marks Michelle Obama’s 54th birthday and her husband, Barack Obama, started her day f with a bouquet flowers and a card sitting on her fice desk this morning.

RELATED: Issa Rae Says Michelle Obama Was “Mad” About One Scene In “Insecure”

Michelle posted a photo to Instagram thanking Barack as well as the many fans who have also sent her letters for her birthday. “You’re my best friend, biggest fan, and getting notes and flowers from you will never get old,” she says Barack. “And to the many people from around the country who sent cards and posted on social media, you have no idea how much we love hearing from you.” Check out the full post below.

Just three months ago was Michelle and Barack’s 25th anniversary. The former president surprised his with a video him stating how much love he still has for her during her speech at the Pennsylvania Conference for Women.

RELATED: Barack & Michelle Obama Ink Book Deal Rumored To Be Worth Over $60 Million

“Listen, I know you are with all these important Pennsylvania women and you’re sharing the stage with our buddy Shonda Rhimes, but I had to crash this party because today we have been married for 25 years,” he said in the video. “Now, the idea that you would put up with me for a quarter a century is a remarkable testament to what a saintly, wonderful, patient person you are.”