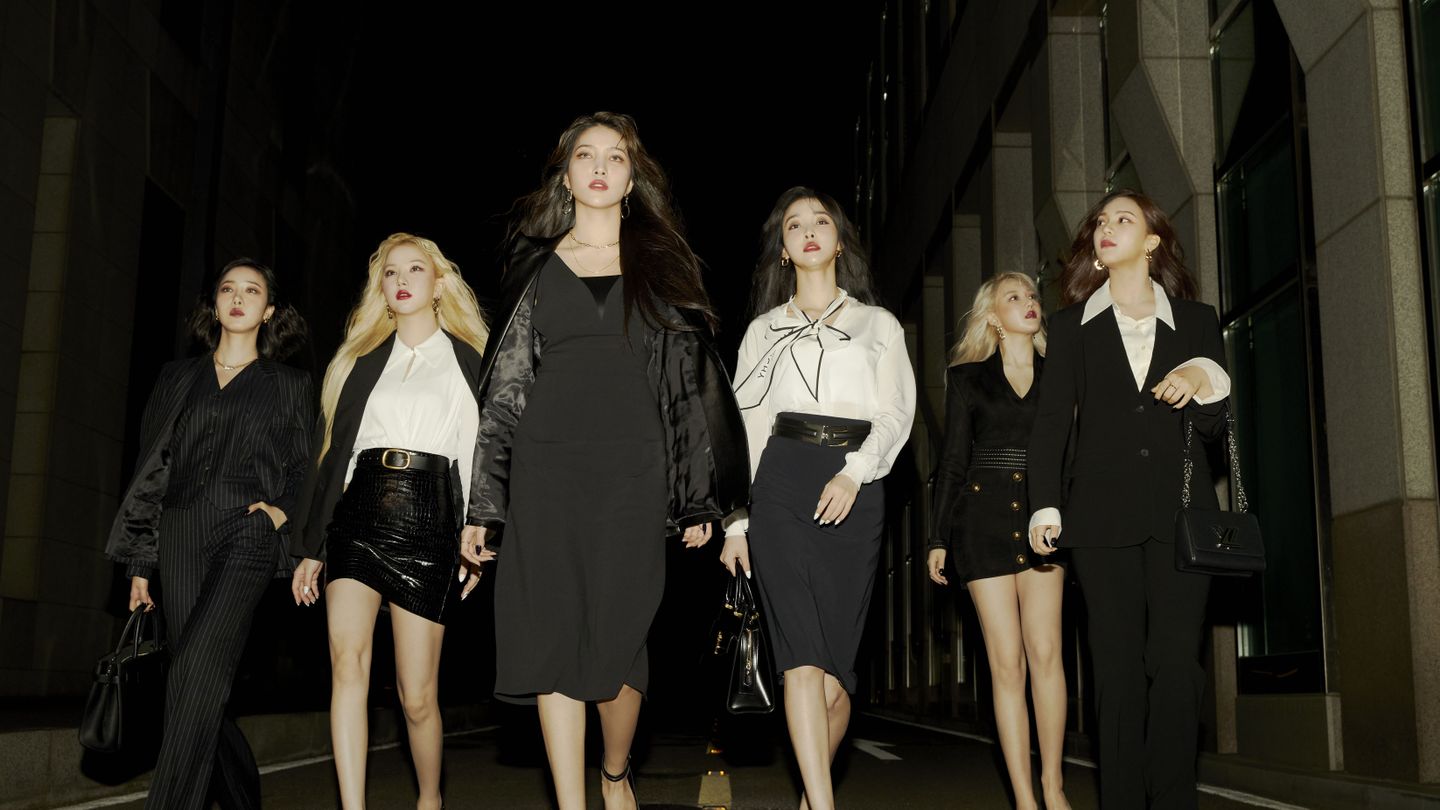 ‘Modern Witches’ GFRIEND And The Magic Of Collaboration

Though witches have received a positive wash of public relations in recent years, with shows like Chilling Adventures of Sabrina and the rise of #WitchTok, the word itself — “witch” — has historically held negative connotations. It has often been used to attack women whose confidence and intellect defy the norms, from the Salem trials in the late 1600s to accusations hurled at progressive congresswoman Alexandria Ocasio-Cortez today. But for K-pop girl group GFRIEND, the magical being is less vindictive and more an empowered symbol of individualism, and in her, they have found a generative subject for their latest album, 回:Walpurgis Night, which dropped on Monday (November 9). Calling themselves “modern witches,” the singer Eunha defines the phrase as “a girl who faces her desires genuinely, continues to walk her own path in line with her own standards, and is not bothered by what other people say or think.”

It’s a fitting moniker for GFRIEND’s own story, which has involved a hard-fought journey of self-discovery. Sowon, Yerin, Eunha, SinB, Yuju, and Umji debuted in 2015 under Source Music, now a subsidiary of Big Hit Entertainment. Their discography has been driven by thematic trilogies, as with the popular School trinity, and the sextet has became a standout within the genre for their sharp, synchronized choreographies and nostalgic, whimsical sounds. Beneath imagery as pristine and clear as the glass beads that populate their narrative universe, GFRIEND have always had a cutting edge. Whether it’s their lively personalities, complex dance routines, or shredding guitar solos, they consistently offer more than meets the eye. But now, their intrinsic magic is in plain sight.

回:Walpurgis Night embraces that transition. It’s the final installment of “回” (pinyin /huí/), a trilogy of releases named after the Sino-Korean word for “to spin,” “to return.” Part one, the February collection 回:Labyrinth, saw GFRIEND face tough choices in the melancholy “Crossroads.” It was followed up by the July EP, 回:Song of the Sirens, which led the members into temptation with the hypnotizing “Apple.” Now, after growing and finding confidence through these symbolic trials, as well as through five years of touring and growing close since their debut, Yuju explains that the group is moving “forward to a new path.”

That journey has led them to Walpurgis Night, the fête after which the album is named, also known as the “festival of the witches” or “second Halloween.”  Celebrated throughout Northern and Central Europe, the date marks a moment when the veil between the material and the spiritual worlds is thinner. It is rife with symbolism for the musicians. “It celebrates a new beginning upon welcoming spring and clearing away the remnants of winter with campfires and fireworks,” explains Sowon, the leader of the group.

That spirit is present in the final sequence of the mystical music video for “Apple.” Main dancer SinB is draped in red lace, swaying around a tree on fire, at once the embodiment of the biblical fruit of temptation and a living, luring flame. “Apple” marks the group’s initiation into daring sounds, visuals, and lyrics: “Don’t agonize, let go the timid child / take me, the endless witching hour descends,” they sing while strutting in glamourous black gowns and dark, shimmery makeup. 回:Walpurgis Night represents the outcomes from that surrender. “[This album] tells the story of girls who are able to view themselves purely from their own perspectives, after experiencing a series of choices and temptations,” explains Eunha. “They finally realize their true desires, allow themselves to candidly express them, and support others who walk the same path.”

And that’s where the synthy groove of lead single “Mago” comes in. Named after a cosmogonic Korean goddess, it also means “magician” in various languages, including Spanish and Portuguese. The light, celebratory sound captures the frenetic energy of a mystical festival, according to Yerin, the group’s happy pill. She explains, “We also wanted to come up with music that everyone could have fun and enjoy throughout the difficult times.” The corresponding visual is similarly carefree, with an atmosphere culled straight from ‘70s discotheques and hand-twirling choreography that reminds Sowon of “a witch chanting a spell.”

The frenetic energy of a mystical festival extends throughout 回:Walpurgis Night, from the edgy, rock-tinged “Love Spell,” to the city-pop tune “Three of Cups,” to the bubbly synths of “GRWM.” As performers, they move in unison like an all-powerful coven, bewitching the listener with grace and versatility. But that collaborative practice is apparent in the writing, too, and the witty lyrical references to Tarot cards, incantations, and other magical matters are the product of creative contributions from all members. “We’re still in the process of learning so we have a lot to improve, and the process was difficult,” SinB says. “But we felt so proud to actually see the finished songs that include lyrics that we wrote. It’s a meaningful outcome just to discover the joy of expressing our thoughts and feelings.”

That partnership was tested by the group’s first-ever unit songs, which saw the members split into pairs to craft their own concepts and lyrics from scratch. But this is also where they shine the brightest. SinB is paired with Yerin in “Secret Diary,” a dreamy track that Yerin reveals was “based on the [friendship] I have had with SinB since the trainee years.” The tropical-inspired “Better Me” offers a striking contrast between eldest member Sowon and maknae Umji, who was apprehensive to the project at first. “I was concerned that the stage would look empty with just me and Sowon, but soon realized that it looked way more amazing with dancers.” Closing out the triad is “Night Drive,” a soothing journey highlighting the vocal diversity of Eunha and Yuju, who explains that their rich ranges “helped us in the moments of exchanging stories with each other.”

Across 11 tracks, the name GFRIEND takes on a powerful new layer of meaning, of sisterhood and companionship. That’s their magic: They are girl friends, celebrating their bond and their united power in a world that still insists on witch-hunts. “Since we’ve been together all along, we were able to enjoy more during good times, and quickly overcome the difficulties during hard times. Teamwork is one of the things that we feel confident about,” Umji reflects. “Also, we’re all very responsible, which has allowed us to do our best and continue moving forward. We still learn and get inspired from each other a lot.”