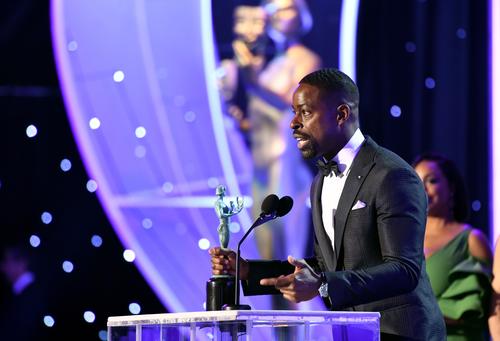 Sunday night, entertainers far and wide gathered for the 24th annual Screen Actors Guild Awards in Los Angeles as actors, actresses, writers, producers, and the like were recognized by their peers for their accompishments in film and television. Among the nominees, we found the ususal suspects making their rounds this awards season, with Get Out, Big Little Lies, This Is Us, Stranger Things, and Black-Ish serving as a small representation.

RELATED: Are The 2018 Grammy Nominations Really A Step In The Right Direction?

The night’s biggest honor, the Lifetime Achievement Award, was presented to honoree Morgan Freeman, whose decades-long career has earned him a great deal respect and revere among his contemporaries. “These moments in life usually call for an entire litany thank you’s. I can’t do that because I don’t know all your names, so I won’t try,” Freeman noted. “This is beyond honor. This is a place in history.”

Earlier on in the broadcast, another African-American actor poised to follow in the footsteps the likes Morgan Freeman also found himself cementing his place in history yet again as Sterling K. Brown would become the first black actor to win the SAG Award for Outstanding Performance by a Male Actor in A Drama Series for his portrayal Randall Pearson in NBC’s This Is Us.

“What an honor it is to be recognized by your peers for a job well done,” Brown said as he accepted his award. “This room is a source endless inspiration for me. I love all you. People call us weird and strange; the truth the matter is everybody’s weird and strange, and we just embrace ourselves for who we are.”