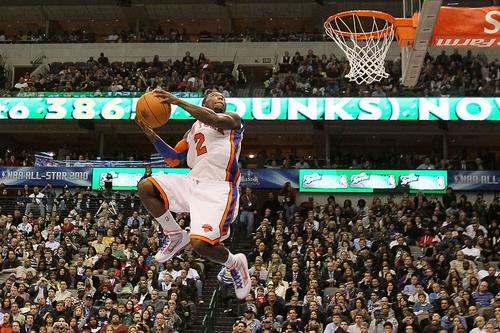 Nate Robinson has ficially signed on for the second season the Big3 League. The three-time Slam Dunk champ will co-captain team Tri-State alongside Jermaine O’Neal.

RELATED: Stephen A. Smith Says DeAndre Jordan Wants To Be Traded To The Houston Rockets

Robinson, 33, last played in the NBA during the 2015-16 season when he made two appearances as a member the New Orleans Pelicans. Since then, he has played overseas in Israel and Venezuela, as well as a brief stint in the NBA’s G League for the Delaware 87ers.

Last April, Robinson told USA Today’s Nina Mandell (H/T Bleacher Report) that he would play in the NBA even if they didn’t pay him.

“I’m not a money guy,” Robinson said. “If basketball in the NBA was free, I would] still play. If the NFL was free, I’d play. Just because I love to play the game. Financially, it’s for my family, for my kids. It’s not really for me. I don’t care about the fame. I would still play. Even if it’s soccer, I would play.”

During his NBA career, Robinson averaged 11 points and 3 assists per night while appearing in 618 games.