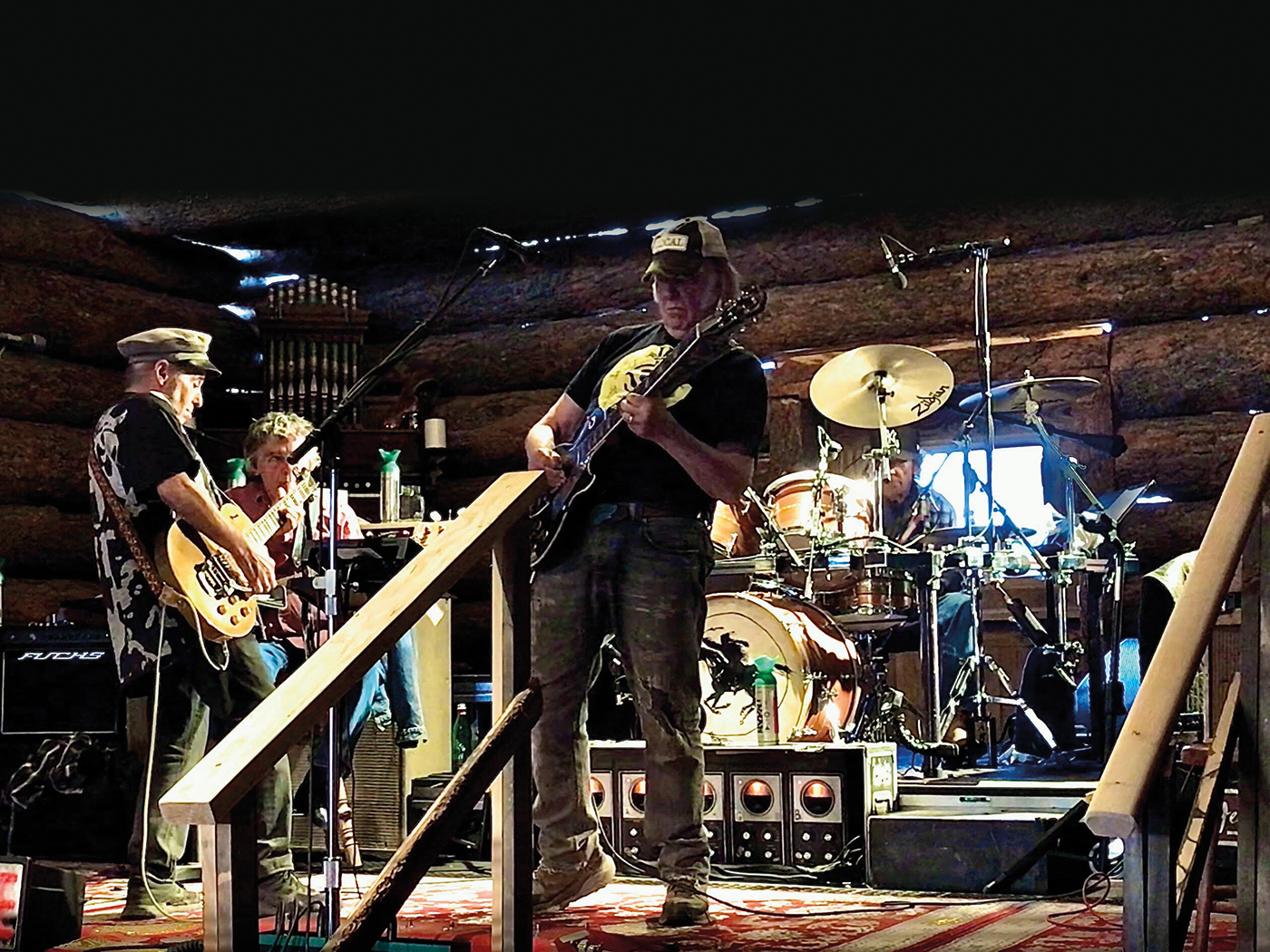 Thanks to Peter Jackson’s Get Back documentary, Beatles fans got to be the proverbial fly on the wall for eight hours, watching the album sessions unfold in what often felt like real time. Actress/filmmaker Darryl Hannah’s Barn, which documents the making of the 2021 Neil Young and Crazy Horse album of the same name, doesn’t give viewers quite the same amount of unfettered access; it clocks in at about an hour and a quarter, for one thing. But Jackson didn’t include footage of John Lennon taking an al fresco leak, something which we get to witness Young doing here. That’s the kind of access you get when you’re married to your subject. Think of Barn, then, as an appropriately raw, but occasionally unabashedly beautiful, cinéma vérité experience.

Barn came into being way up in the Rocky Mountains near Telluride, Colorado, and Hannah takes advantage of this rugged, gorgeous setting. Her film is filled with long unbroken imagery of billowing clouds and shimmering alpine lakes, shaggy dogs and craggy peaks — “Natural Beauty”, just like Neil’s old Harvest Moon epic celebrated.

Hannah also takes us into the refurbished 19th-century structure where the album was recorded, a place a little like Crazy Horse themselves in 2021: plenty weather-worn and a little bit ragged, but somehow still standing, defiant and proud. Looking at the band here – Billy Talbot on bass, Ralph Molina on drums and Nils Lofgren on guitar, piano and accordion – the viewer is struck equally by their readily apparent mortality and their collective strength. We’re a long way away from the youthful exuberance of Everybody Knows This Is Nowhere, but Neil and the Horse have still got plenty of kick left in them.

They’ve also got plenty of deep affection for one another. In a handful of intimate sequences, Hannah lets us eavesdrop on casual conversations between these longtime bandmates as they reminisce about fallen comrades, gently rib one another, and bask in the glow of a half-century-long friendship. The warmth and familial feelings are palpable. Compared to Mountaintop – the film that accompanied Crazy Horse’s 2019 album Colorado – Barn feels positively breezy. Mountaintop’s most memorable scenes featured Young terrorising his engineer, fuming over technical difficulties and looking uncharacteristically stressed out. This time around, the cozy barn environs must’ve made him more comfortable (and perhaps the weed pipe he’s toking on from time to time during the sessions helped too).

Of course, it all comes back to that wild, ineffable music that Young and Crazy Horse can still make – and Barn gives us a wealth of moments that show the band comfortably in its element. We see the songs develop slowly but surely, Talbot, Molina and Lofgren gathered around Neil at the piano, working out harmonies, fiddling gently with arrangements. And then we get to witness those songs somehow come together, the passion and focus visible on each bandmate’s face.

The sequence highlighting “Welcome Back”, one of Barn’s best and most haunting performances, is also the film’s apex: a privileged front-row seat to some kind of unexplainable magic being made. It’s just one static shot, but it’s positively transfixing, as Young plays remarkably expressive guitar, Crazy Horse steadily rising behind him. Even the band seems surprised by what they’ve conjured up. “This is why we’re fuckin’ here,” Neil exclaims afterwards. “Thank you, God! Thank you, myriad of possibilities.”