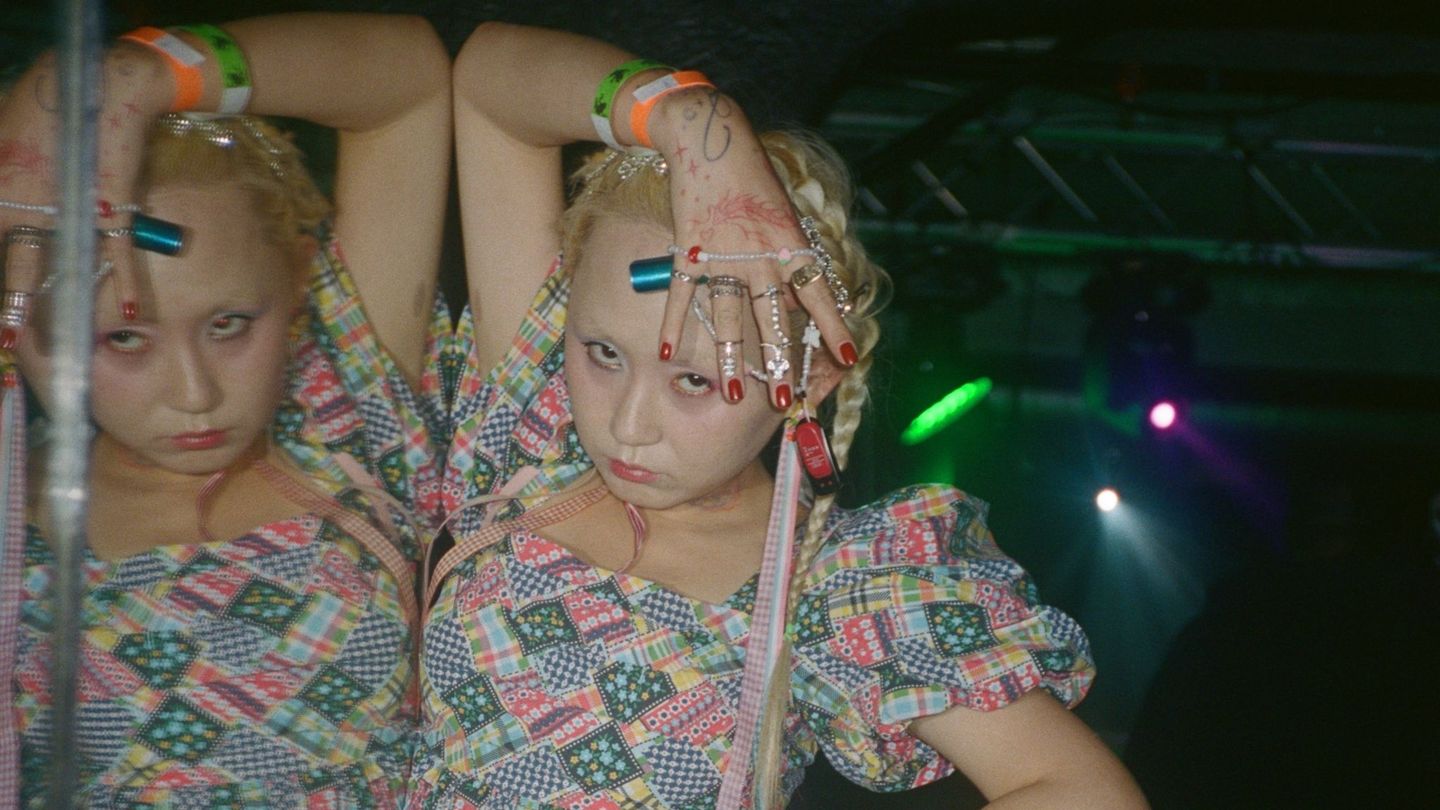 No One Else Sounds Like Alice Longyu Gao, Period

Alice Longyu Gao celebrated the release of her bombastic hyperpop single, “100 Boyfriends,” produced by 100 gecs’s Dylan Brady, by inviting her fans to a private party on the terrace of  Dumbo House, a luxury, members-only club and bar in Brooklyn. “I warned them,” the 27-year-old musician tells MTV News over Zoom from her Los Angeles home. “I literally said, ‘You know the type of music I play. Do you really think we can do this here?’” As instructed by the venue, Gao proceeded with her DJ set and performance, but her extremely high-energy sounds shocked the club’s opulent members and overwhelmed its weak speaker system. Nonetheless, her fans had a blast. “[Dumbo] House was trying to cut us short that night,” she says, noting that staff members found graffiti on the tables. “At the end of the day, we’re punk. We’re young people. We love music. We love to party.”

Gao is used to thriving in environments that aren’t prepared for her energy. She grew up the only child of conservative, entrepreneurial parents in Bengbu, China, who expected her to take over the family business, a latex glove factory. However, Gao wanted to pursue music. She was classically trained to play piano from a young age, though she says it was merely “a posh move” for her parents “to flex about” to family and friends. “They think living a life by doing art is delusional,” she explains. But not only did her parents advise against Gao’s artistic dreams — at first, they didn’t even want her to be born a woman, a disheartening fact that inspired the title of her debut EP, High Dragon and Universe, which she is self-releasing through music company AWAL on October 14.

Alice is Gao’s chosen English name, but her given Chinese name, Longyu Gao, is traditionally masculine. Gao means high, Long means dragon, and Yu means universe. “My dad made up this name before I was born, and my mom didn’t take the gender assessment. It’s not legal in China [to sex-screen for babies], because otherwise a lot of people tend to give up on girls,” she says. “To their disappointment, I came out as a girl and I’m hella twisted, hella wild.” Growing up was tough; teachers would often mistake her for a boy after reading her name on attendance lists. Today, after a decade of hustling solo in the entertainment industry, Gao is reclaiming her name and its perceived power. “Having dragon in my blood is so cool, and it gives me wings,” she details. “Fuck all these people who think a female cannot do shit.”

Against her parents’ wishes, Gao moved to the United States at 17. After preparing herself for the SATs and TOEFL exam, for non-native English speakers, she applied to 16 colleges and got into 11 of them, thanks to a passionate essay about her experiences in Bengbu’s local LGBTQ+ community. (Gao identifies as pansexual.) She attended Boston University to study philosophy and completed Harvard University’s Summer Program in Kyoto, Japan, where she learned to speak fluent Japanese. At 21 years old, she graduated early and moved to New York to start her artist career. “In my last semester, I met this British it-girl DJ, Chelsea Leyland,” she says. “I became her assistant, and that was my stepping stone to go into the entertainment world.”

Looking to make a name for herself, Gao took internships at Comme des Garçons and Paper magazine. (“I was literally giving other artists coverage.”) But NYC is expensive, and she needed to make money to pay her East Village rent, so she utilized her musical skills and taught herself to DJ. “It was really hard because I’m foreign,” she explains. “I had to learn, ‘What are the ’90s hits? What are the songs for a frat party-vibe crowd? How can I find a cool remix so I don’t sound too stereotypical, but people still like it?’”

She figured it out quickly. Gao’s first-ever DJ gig caught the attention of A$AP Mob’s publicist, who invited her to perform her second-ever set at the hip-hop collective’s Vlone clothing brand launch at Miami’s Art Basel in 2016. “I went on right after A$AP Mob’s performance. I was playing ’Barbie Girl’ around 1:30 a.m., [and] A$AP Rocky himself came and shut me down,” she recalls. “I was so upset. I was like, ‘Oh my god, I’m obsessed with A$AP Rocky. This is the end of my DJ career. It’s over.’” After her set, a tearful Gao ran around the venue trying to find the rapper. When she did, he told her not to take it personally: The song choice was simply wrong for the party. A few months later, they reunited at another event, and Gao says he told her, “‘I want to do a party with you. Let’s play ‘Barbie [Girl].’”

For the next couple years, Gao worked hard and performed anywhere she could, which sometimes meant “DJing for six hours for $50 in cash” and enduring harassment from partygoers. The hustle gets lonely and often takes an emotional toll on her, even to this day. “I was crying this morning so hard because I was going through photos. I haven’t seen my grandma in over half a decade. I haven’t seen my father in five years.”

Ever-determined, Gao has persisted. She officially launched her singing career in 2018, independently releasing singles like “I Want My Hoe Time Back” and “Magnificroissant” and finding herself in studio sessions with Swedish pop hitmakers behind “Ava Max [and] Katy Perry-type beats.” The following year, she met 100 gecs’s Brady, and together they swiftly crafted the explosive fan-favorite tracks, “Dumb Bitch Juice” and “Rich Bitch Juice.” Mere months later, Lady Gaga placed “Rich Bitch Juice” on her Women of Choice playlist on Apple Music. The feat proved Gao’s hard work was finally paying off, and it served as positive reinforcement that she should keep creating where she feels happiest: the studio.

“By the end of every session, I’d go into a mode that I’d be so upset, because [it’s] about the time to go back to my real life, which is feeling so vulnerable, alone, and isolated all the time in my house,” she says. “When I’m making music, I make myself laugh a lot, and usually I don’t do that… I’m actually really bad energy, honestly. [My music] is my fantasy of the really fearless and brave person I wish I [was].”

High Dragon and Universe is filled with fantasy tracks like the ultra-confident “100 Boyfriends,” which draws from an imaginative idea where Gao runs a farm where she raises and owns her many lovers. “On this farm, I make up nicknames for all the boyfriends, because there are too many of them. I can’t really remember their real names, and I don’t really care,” she says. Another track, intense electro banger “Bleeding in the Studio,” was created for a hypothetical Gao headlining set at Electric Daisy Carnival or Burning Man, even though “I’m not even in that scene at all,” she says with a laugh.

Gao struggles with low self-esteem, but she has high ambitions for her music. She wants to sell out stadiums and earn enough money to not only fund her projects, but provide others with better lives and the art education she was deprived of growing up. “Imagine if I’m popular like Dua Lipa — I swear to God, if I do a charity project, all the rich people will come to my fundraising event, and they will open their wallet,” she says. “After I came to America, I was always alone, and going to museums really helped me to stay focused and train my mind… I would love to make museums completely free to the public.”

Her goals aren’t so far-fetched. Without a manager, booking agent, or major label by her side, Gao regularly packs clubs with her fans. However, she says she’s been repeatedly shut out by big-time executives. “I’ve literally had multiple music industry bros telling me, ‘I can tell you’re really smart, and you’re a threat to major labels,’” says Gao. She also still lacks support from her parents. “I could be winning fucking Grammys, and my dad would be like, ‘I don’t give a fuck.’” But Gao isn’t discouraged. She’s confident in her work, knows she’s unique, and recognizes that extreme success takes time. “No one else sounds like me, period,” she says. “I think I will win a Grammy in three years.”