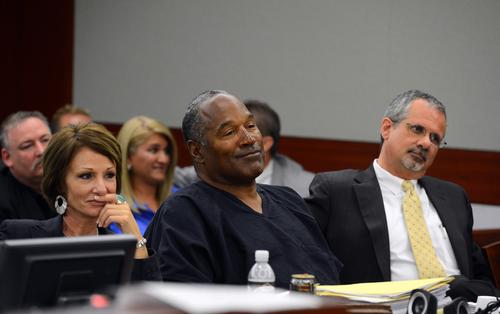 O.J. Simpson Has $100M Lawsuit On The Way For Las Vegas Resort That Banned Him

The Juice could be back in court sooner rather than later. A report from the New York Daily News has indicated that O.J. Simpson, the notorious former football star who was released from prison late last year, is making moves to sue The Cosmopolitan in Las Vegas for at least $100 million following an incident that led to him being banned from the establishment for life.

RELATED: O.J. Simpson Responds To Caitlyn Jenner Saying She Knew He Was Guilty

Back in November, we reported that O.J. was thrown out the resort hotel because he was supposedly being drunk and disorderly, which led to several complaints being lodged against him. At the time, he was reportedly getting angry with the hotel’s staff and breaking glassware at the bar area. Security ended up escorting him out and the lifetime ban was handed down shortly thereafter. All that being said, Simpson’s attorney thinks that the resort are actually the ones in the wrong here.

His lawyer, Malcolm LaVergne, claims that employees at the establishment used a  “fake reason” to kick Simpson out, adding that the “false and malicious allegations” were used simply as a ploy for the hotel/casino to make money f the tabloid media buzz that was sure to follow. “It was the most ridiculous thing ever,” LaVergne said, adding that Simpson isn’t “going to take it lying down anymore.”

As a matter company policy, The Cosmopolitan didn’t issue any further comment on the original incident, nor have they made an ficial statement concerning the possible litigation that is to come. One thing’s for sure: O.J. isn’t a man who is okay with being taken advantage .